A Walking Dead Pop-Up Book Is Coming Out November 10 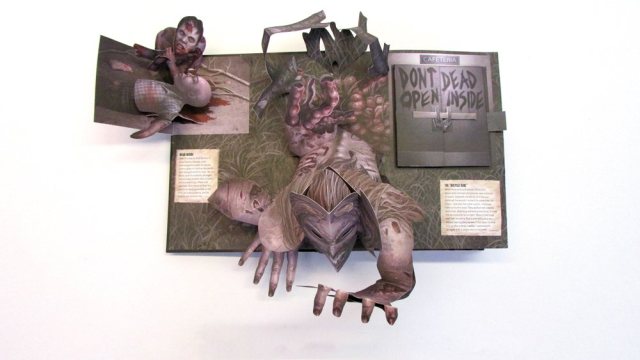 It seems like very few things in this world can be classified as exclusively for children anymore. The grown-ups took back coloring books this summer with a nationwide trend of “relaxing” through colorizing detailed images, and now not even pop-up books are safe.

Case in point: there’s a Walking Dead pop-up book coming very soon. Based on the show, it recreates some of the most famous episode scenes to date as best it can with the medium of paper.

This spectacular pop-up book forms the perfect guide to the world of AMC’s “The Walking Dead.” Filled with eye-catchingly gory pops, the book takes the reader through some of the most iconic moments from the hugely popular series. It features five spreads, each with its own central pop that depicts a key element from the show, such as the prison where the survivors found refuge before being attacked by the Governor or the Walker known as “Bicycle Girl” reaching out at the reader. Each spread also includes several smaller pops depicting other memorable elements from “The Walking Dead,” such as the Governor’s “man cave” (including his unique aquarium complete with severed heads), the Well Walker, and much, much more.

If you need to see this thing in action, we’ve got video:

If you’re looking for an unusual conversation piece, or if you get invited to Wednesday Addams’s birthday party, here’s the perfect item to pick up. The Walking Dead Pop-Up Book comes out November 10, from Insight Editions.

Norman Reedus Thanks Fans With Fan-Art Book
Be the first to comment!
Leave a reply »