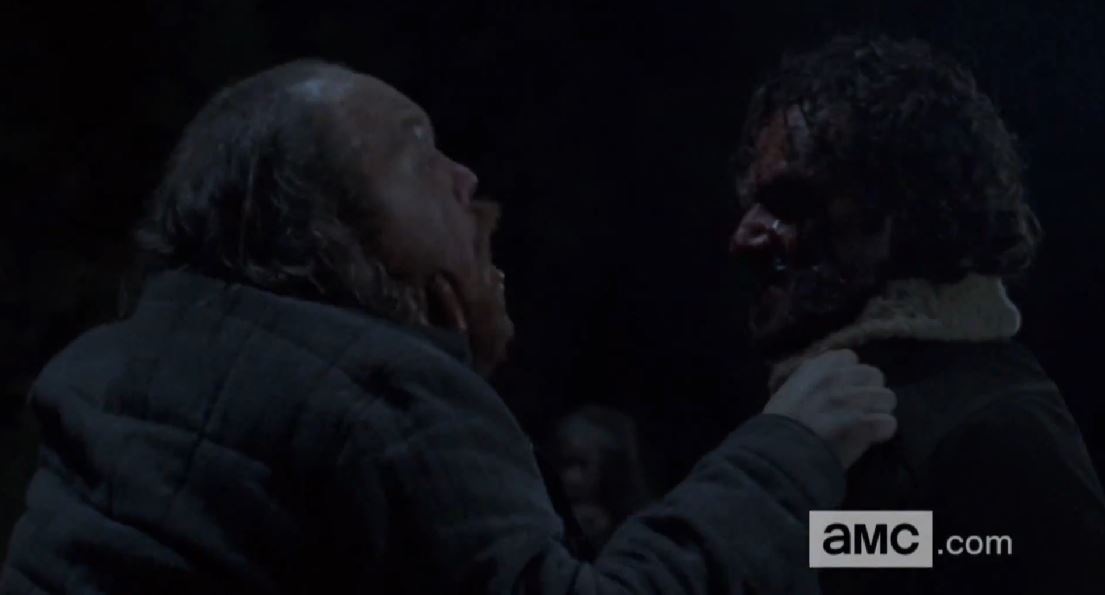 The Walking Dead Interviews Wiki has an interview with Keith Brooks, the actor who played Dan, the most horrible of the Claimers and the one who had the worst intentions for Carl in the season finale, “A.”

And despite how convincingly creepy and menacing Brooks was in the role, in real life seems like a laid back guy. He even loves puppies.

Brooks said that in his mind he pictured Dan as a sort of attack dog who revels in a world where he doesn’t have to act human any more. But in real life Brooks was uncomfortable doing the attempted rape scene.

“Uhm…..I mean something like that is definitely out of my comfort zone….so to an extent. But Chandler (Riggs) is a super cool kid, and we talked about it a lot before hand. Everyone on set is super nice and awesome….so they are sympathetic to what a weird situation this is, you know? At the end of the day, it was my job,” Brooks said. 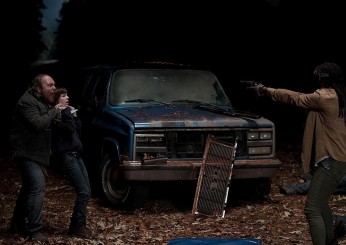 Brooks said the rape scene and his violent death scene actually took place on his birthday. He described how his bloody death worked:

“So everyone’s super intimidated by me…and complimenting how creepy I was.But in a friendly way, you know? Andy is getting ready to do the gutting me scene. And he’s getting himself pumped up. He’s getting really into character. The trick is he’s supposed to drop the real knife as he comes to me, and just begin stabbing me with his hand. I have a tube going through my pants, to bring a blood effect up through my shirt. The idea is it i’ll spray like a hose. And i have a mouthful of blood.The camera is just on us for a moment. And they call action.Andy charges at me….he drops the real knife….and basically starts punching me in the gut….pretending there’s a knife in his hand…. The tube going through my pants starts spraying out blood everywhere….and I start spitting blood into Andy’s face. So we’re both covered in blood while he punches me repeatedly, doing this death scene. And they yell cut. We’re both covered in blood and Andy just hugs me, gently saying “I’m so sorry….” we both look over to see Norman Reedus eating a cheeseburger from god knows where, saying “You guys both look crazy.” And that was my last day/experience in a nutshell,” Brooks said. 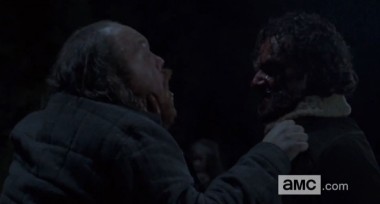 Brooks also said his favorite thing about working on The Walking Dead is the dog policy, which allows people to bring their dog to the set.

“Imagine a world of puppies and zombies intermingling together. It’s the happiest place on earth,” Brook said.

Unfortunately, some people have taken Brooks’ fictional character too seriously, and he has received hate mail, but he keeps a positive attitude about it.

“To be honest, it doesn’t bother me that much. People get caught up in the excitement of it all and get flustered by how much they hated my character (I guess I did something right). Sometimes its hard for people to distinguish reality and fiction, I get that. But I’m not that character on TV. I’m solely the guy who acted it. The writers made some amazing character arcs…I just portrayed something in it. So a lot of people write for me to kill myself. Harsh. I’m not gonna do it, clearly but they should go watch me in another movie…see I’m not that person.

People can insult me all they want. Its fine. I’m strong enough to take it. Plus I have people writing me in equal amounts telling me how much they enjoyed my performance, the show, etc. I guess….that’s what i’d have to say about it,” Brooks said.

There’s lots more in the full interview, so check it out here:

A Treasury of Season Four Finale Teases (Non-Spoiler)
Be the first to comment!
Leave a reply »