Actually, The Violence is The Same, Says Scott Gimple 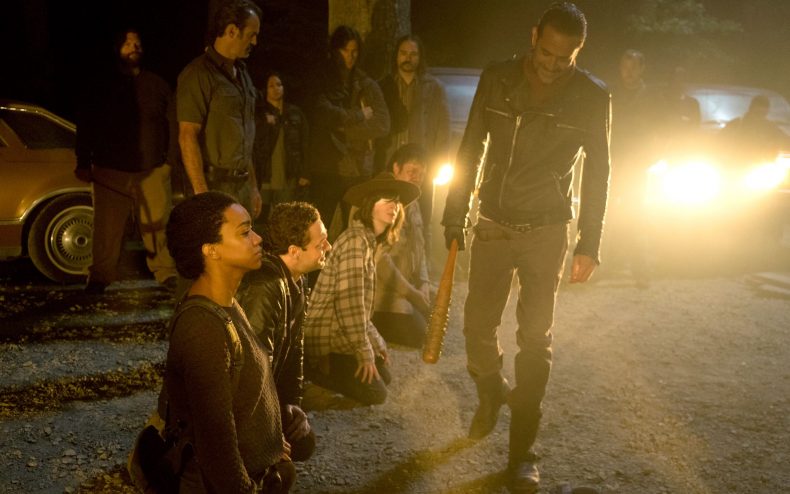 Last week Gale Anne Hurd told the press at the National Association of Television Program Executives conference that as a response to the negative backlash to the graphic violence in the Season 7 premiere of The Walking Dead, all future episodes had their bloody bits toned down. “We were able to look at the feedback on the level of violence…..we did tone it down for episodes we were still filming for later on in the season,” she claimed.

But, uh, not so fast. Two other high-ups now say that isn’t true. Showrunner Scott Gimple told Entertainment Weekly that there had been no effort to cut violence from The Walking Dead lately — there was less violence, true, but that was just what the story called for. He also pointed out the show is rarely going to get as nasty-looking as Negan bashing Glenn’s eye out of its socket — because again, it was what the story called for at the time.

“The violence in the premiere was pronounced for a reason,” said Gimple. “The awfulness of what happened to the characters was very specific to that episode and the beginning of this whole new story. I don’t think like that’s the base level of violence that necessarily should be on the show. It should be specific to a story and a purpose, and there was a purpose of traumatizing these characters to a point where maybe they would have been docile for the rest of their lives, which was Negan’s point. But I will say again, the violence in the premiere was for a specific narrative purpose and I would never say that that’s the baseline amount of violence that we would show on the show. If we’re ever going to see something that pronounced, there needs to be a specific narrative purpose for it.”

Greg Nicotero was asked by EW if Hurd’s statement about negative feedback had affected the show’s content in any way, and got a big fat “NO,” followed by “I think—even after looking at that episode 1 again—as tough as it was for people to watch, I don’t think we would have done it any differently. I don’t think we’ll ever pull ourselves back. There is definitely a difference between violence against walkers and human on human violence, but truthfully, we’re serving our story.”

Looks like it’s one word against another. Who do YOU believe?