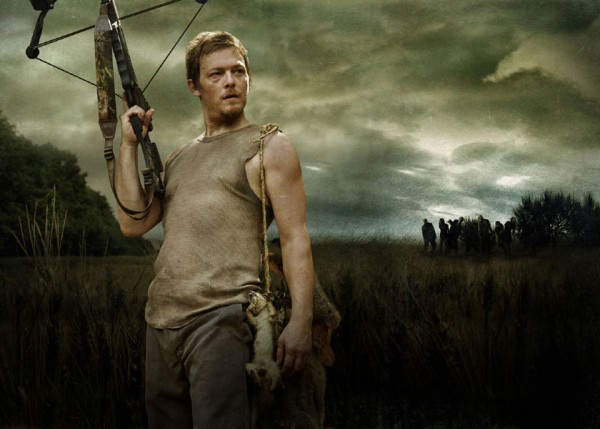 The official blog of AMC has posted a post-season interview with Norman Reedus. He discusses the events of the past few episodes, his methods of playing Daryl, and what flavor of bootleg beer Daryl would create for himself.

Norman unwinds by riding his motorcycle: “I always have my motorcycle on set, so I’ll ride through the woods, back home and just feel the breeze on my face, look at the trees, look at the sun going down or coming up. It’s a great way to wind down, but also a great way to get ready. I do some of my best thinking on there.”

Norman thinks Daryl would have been “an a-hole” if zombies weren’t a thing: “Well, his brother was kind of an a–hole and I think he was slowly turning into his brother. Merle even says that they had met up at that camp [where Rick was] to initially rob everyone before it all went south. I imagine Daryl would still be doing things like that, being up to no good.”

If Daryl made moonshine it would taste like bacon, apparently: “I have quite a bit of moonshine in my house in Georgia. Working down in the South, sometimes you get slipped some here and there. They’re so sweet that I can’t do anything but sip them once every month. An end-of-the-world moonshine? Jeez. Maybe for Norman, it’d taste like coffee which would completely be disgusting, but Daryl’s would taste like, I don’t know, Jim Beam and bacon?”