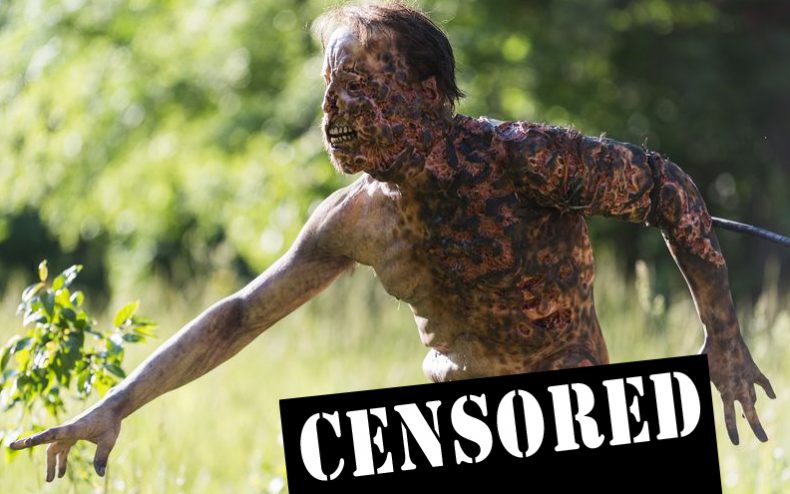 After 7 1/2 seasons of The Walking Dead, have we seen it all? AMC would argue otherwise, because there’s one final frontier to cross….can viewers handle the first zombie in the buff?

The reveal came out of Greg Nicotero’s mouth during an interview with EW.com. “There’s an episode where we did our first fully nude walker,” he said. “We’ve never done that before.”

The interview was mainly about Season 8B in general and what direction the half-season was about to take. “Clearly, the balance has shifted,” said Nicotero. “Now that Negan and his group have escaped the Sanctuary, there’s not as much talking about what the ramifications are of what we’re going to do, but now our group has to be on the defensive because Negan’s out and he’s pissed and it’s definitely a different dynamic than the first half of the season.”

Like the Incredible Hulk’s indestructible pants, Walker clothes tend to be durable even in the most extreme conditions, at least where it really counts. However, even if they’re thinking of changing that, we seriously doubt this show is about to turn into the animated corpse equivalent of Altered Carbon. Who wants to bet that the zombie they’re talking about is actually so dessicated that its naughty bits fell off in a field somewhere months ago?

Right now, it’s a casually tossed-out line from a longer interview about other subjects. But if AMC pounces on it and heavily promotes the episode for this reason, it will hands down be the most embarrassing thing they’ve ever done. Given that a character said “F***” earlier this season and AMC didn’t hype that up, the odds lean more toward a specific promo for a naked zombie not happening. We hope anyway.