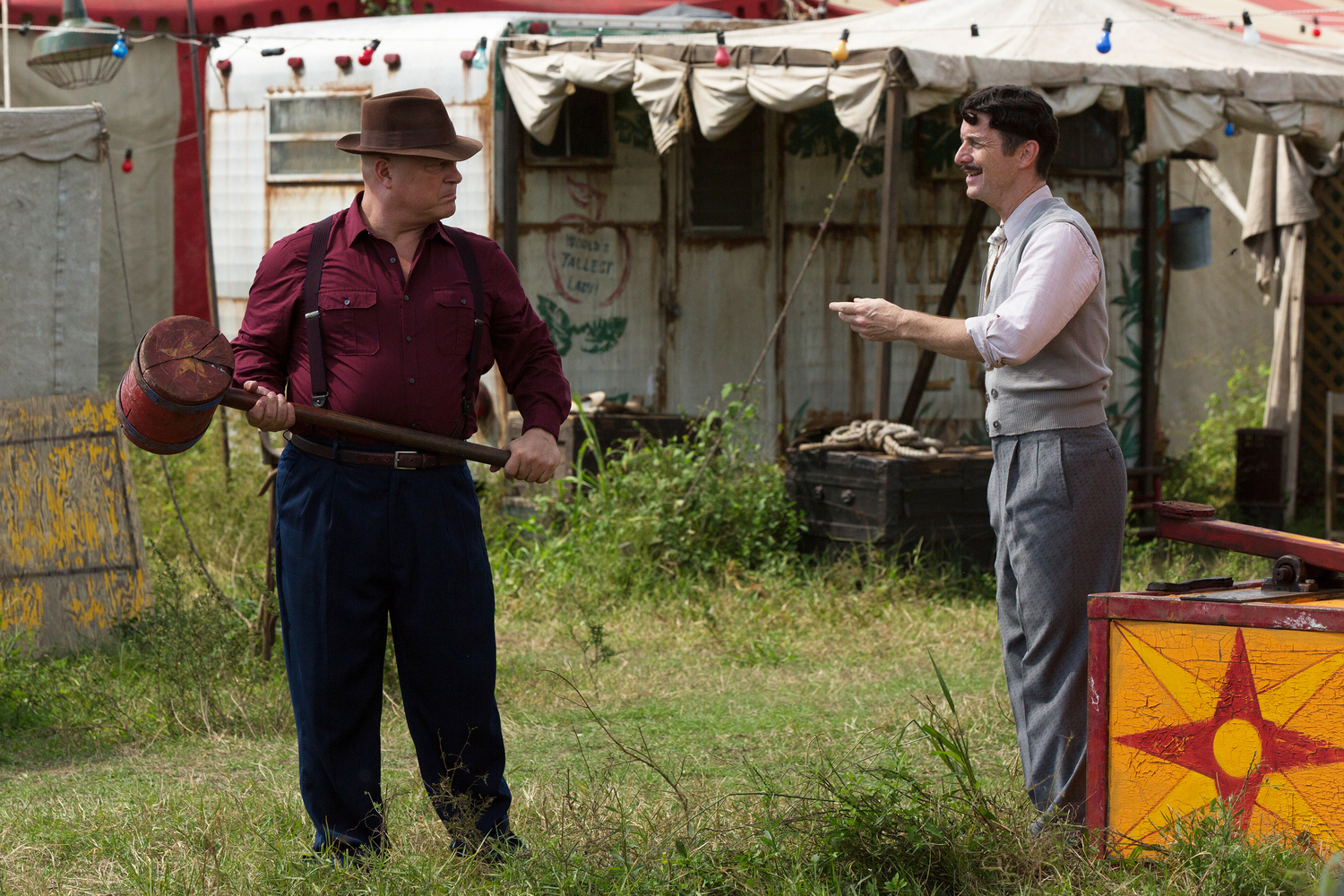 In our culture we elevate family above all. Familial loyalty and familial connections take the highest priority. But we conveniently forget that there can be a dark side to those connections, that some times we do things for or to family that would be unthinkable under any other circumstances.

American Horror Story never shies away from the dark side, as you’ll see in this episode.

We start with Jimmy the Lobster Boy visiting two people who are poster children for twisted family ties if there ever were any, sociopathic man-child Dandy and his enabling mom Gloria. Dandy and Gloria take Jimmy to see the conjoined twins Bette and Dot.

They admit that they “paid good money” for them and have been keeping them, but also say they are happier there and are free to go if they want.

It looks like the twins are willing to stay, especially Bette who is very happy, but Dandy himself blows the deal by getting upset and calling Jimmy a liar. Dandy repeats his story about how he himself killed Twisty while Jimmy was unconscious.

Jimmy knows this didn’t happen, and he knows the only other man there there that knew he was unconscious was the second, masked clown that helped Twisty and nearly sawed Maggie the grifter/fake fortune teller in half.

Jimmy gets desperate now, and in the argument Dandy lets it slip he read Dot’s diary and knows she wants the surgery. He says he’ll never allow it.

“Cause you’d never cut a girl in half, would you Dandy?” Jimmy teases, which makes Dandy explode, red and screaming.

That’s enough to get Dot to leave, and Bette tearfully agrees to go with her sister. Dandy is furious.

We cut to a music video of sorts where Jimmy and some of the other freaks are practicing Nirvana’s “Come as You Are” for Elsa. There are a couple of key cutaways.

The first is Penny taking care of Paul the Illustrated Seal, who seems to be recovering well enough from when Elsa attempted to murder him by throwing a dagger through his gut in her knife-throwing act.

The second is Dell the strongman at the local gay bar, looking for his lover. He doesn’t find him because he’s the hustler that Dandy dismembered.

When the bartender unwisely suggests that you never fall in love with a hustler, Dell nearly cracks his head open by slamming it on the bar. From across the room Stanley the grifter is watching, and sees an opportunity for his plan to kill some of the freaks at the freak show and ship their remains to the American Morbidity Museum for big bucks.

When the song ends Elsa hates it, but Jimmy stands up to her and says he’s not changing it. He also confronts her about selling the twins and it looks like there’s enough evidence for the freaks to finally turn on Elsa.

But then Dot and Bette enter and stick up for Elsa. They lie and say that Elsa took them to Dandy because they wanted to go.

Ethel the Bearded Lady and Desiree the, uh, woman with three boobs and ambiguous genitalia, are happy to visit the kindly old doctor they’ve been seeing. Ethel because although she’s dying, the doctor is kind. Desiree because the doctor is willing to do some gender reassignment surgery to bring her sexual characteristic in line with other women.

But the doctor’s office is closed. Inside they find the doctor’s daughter, who blames the freaks for destroying his faith in humanity and making him kill himself. We know, however, that he lost his faith and killed himself because Dell shattered his hands to keep him from operating on his wife Desiree.

We cut back to the show, where Stanley gets Dell to give him demonstration of a Test Your Strength game, you know, the one where use a hammer to try to make a puck hit a bell. He makes it very clear to Dell through some innuendo that he knows Dell is gay. Dell almost handles it in his usual way, by bashing Stanley to death with the hammer from the game.

But Maggie conveniently pops up as a witness. So Stanley takes Dell to the main tent and tells him his price for silence.

“I need one of your freaks. Dead. Keep it clean, I want the body intact, and it needs to look like they just disappeared,” Stanley says. He gives Dell one day to bring the freak to his barn for preservation.

That night there’s a quick scene with Jimmy and Maggie post-coital. Maggie wants Jimmy to leave but Jimmy feels like he’s got to finish something first. Dandy is the excuse he gives her.

“If the rich kid did it he has to pay,” Jimmy says.

Dell gets a rag and chloroform and sneaks into the big lady Amazon Eve’s caravan. Big mistake. When he tries to knock her out she thinks he’s there to rape her and fights like a wildcat. Or a pro boxer. She beats his ass bloody and throws him out.

Eve, Jimmy and Ethel discuss what to do about Dell in the aftermath. Ethel is quite clear that the only way to stop Dell is to kill him. But Jimmy doesn’t want to. He asks them to give him a chance to get rid of Dell. Jimmy confronts Dell and Dell takes him out for a drink.

At the bar Jimmy says he really doesn’t drink because of what it did to his ma, Ethel. But Dell badgers him to get drunk, and he does very quickly.

The two men start to bond. Dell seems genuinely sympathetic to Jimmy when talking about his deformed hands and how Jimmy covers them with mittens. Jimmy tells him a story about how a few months spent in a cold climate were the happiest of his life because in those months he was “just a guy wearing gloves.”

Dell makes Jimmy give him the gloves, says he’s got nothing to be ashamed of and he’ll break the skulls of anyone who looks at Jimmy funny.

Jimmy gets sick and goes outside to throw up. Dell follows and picks up a brick to, well, break Jimmy’s skull with it. But Jimmy turns and drops a bomb.

It was enough just to see how his mom hates him, Jimmy says, but old timers had also filled him in on Dell’s origins as a descendent of “The Famous Toledo Lobster Clan.”

“I don’t know why you don’t got ’em, but you gave me these,” Jimmy says, holding up his claws.

Jimmy wants to hear Dell admit he’s his father and he does. They hug and Dell casually drops the brick. Jimmy tells Dell he’s marked for death and Dell says he’ll figure something out.

A magnificently drunk Dell and Jimmy come home in the morning, singing loudly and obnoxiously. Elsa tries to get them to quiet down. Desiree also confronts them, which gets Dell to loudly proclaim that Jimmy is his son.

“Must have taken real courage to finally proclaim your progeny after 24 years,” Elsa says sarcastically.

Dell and Jimmy shrug this off, they’re drunk buddies now. Jimmy tells Elsa things are going to be different now that there’s two strong “bulls” running the show. Amazon Eve watches all of this in disgust from her window, by the way, that won’t go well.

Dell takes Jimmy back to his trailer and there’s a nice little moment where Dell covers Jimmy up and calls him son.

And then he steps outside and things go right back to awful. Stanley is waiting on him.

“Queer … isn’t it, how the first cigarette in the morning is the best smoke all day?” he asks suggestively. There’s a huge suggestive pause after the word queer. He tells Dell he’s trying his patience.

We see Penny come home to her abusive dad. She tells him she’s just there to pack and that he’ll have to kill her to stop her.

Daddy won’t kill her. But he says that now she’s run off with freaks has to protect his reputation somehow, and if she shames him he’ll do what it takes to make sure “no one ever knows you belong to me.”

“Prepare for the shaming of your life,” she says, continuing to defy him.

Daddy responds by inviting his friend into the room, a sinister, heavily tattooed man in leather. This is Morris, and daddy says he’s an “artist.”

Elsa has come through one of her promises to Bette, she’s having a hairdresser dye Bette’s hair blonde and make her look like a movie star. Bette asks who she looks like and Dot says she looks like their mother because she wore the same lipstick.

Bette, however, was going for Eve Arden in Mildred Pierce.

Because Dot skipped the makeover, Bette suggests a new act called Metamorphosis, in which Dot plays the plain caterpillar and Bette plays beautiful butterfly. She tells Elsa she can play the fairy godmother and wave the wand, which doesn’t exactly thrill the diva.

As she leaves, Elsa slips Dot a note. Later, while Bette is sleeping, Dot reads it. Elsa says she she noticed Dot just wants money and asks her to tell her what her wish is and she’ll make it come true.

Using Pepper the Pinhead as a delivery girl, Dot relays a note to Elsa, telling her she wants the separation operation.

Morris has Penny unconscious on the couch and is doing something to her face. There’s bloody cloth and stuff around. He says he’s finished, so Daddy comes over.

“Penny, Penny open your eyes, Daddy’s got a big surprise,” Daddy sings to wake her up.

Daddy has had Morris transform Penny into a lizard woman. He’s tatooed her face to look like scales, shaved part of her head, even forked her tongue. She screams when they show her what they’ve done in a mirror.

Elsa and Stanley have dinner in Elsa’s tent. Stanley is still running his con that he’s a manager who will get Elsa her own TV show. Elsa wants Stanley to arrange the operation to get the twins out of her way, but Stanley just suggests murdering them. He says it’ll be a mercy killing. Elsa doesn’t notice, but Ethel, who is serving dessert, overhears.

“I’ve heard about managers who would kill for their clients. Looks like I found one,” Elsa says.

Dell shows up in tiny woman Ma Petite’s tent. Oh no. Okay, this is a little hard for me to write, because she’s the only character I cared about. But I’ll get through it.

Dell wakes Ma Petite, sort of like Maggie did during her aborted attempt to kill her. Dell has a present in a box for Ma Petite. It’s a cute purple dress. She says she can’t wait to try it on and goes to the other side of the tent and puts it on.

She comes back and Dell sees her in the dress.

She lets Dell pick her up and give her a big strong hug. No, no wait, that’s a little too strong Dell. Dell, stop!

With a sickening high-pitched whine the life wheezes out of her as Dell crushes her little body.

There’s a quick scene where Paul hears a noise in his caravan and wakes up. He gets up and sees it’s Penny, disfigured by her father.

“This is my fault. What have I done?” Paul says, near tears. They embrace.

And finally we get a scene of an unveiling at the American Morbidity Museum. The others have been fantasy sequences, but, unfortunately, this one seems all too real. As the rich drink champagne, the museum director pulls the cover off the museum’s latest pricey acquisition.

Discuss the episode in our forum.