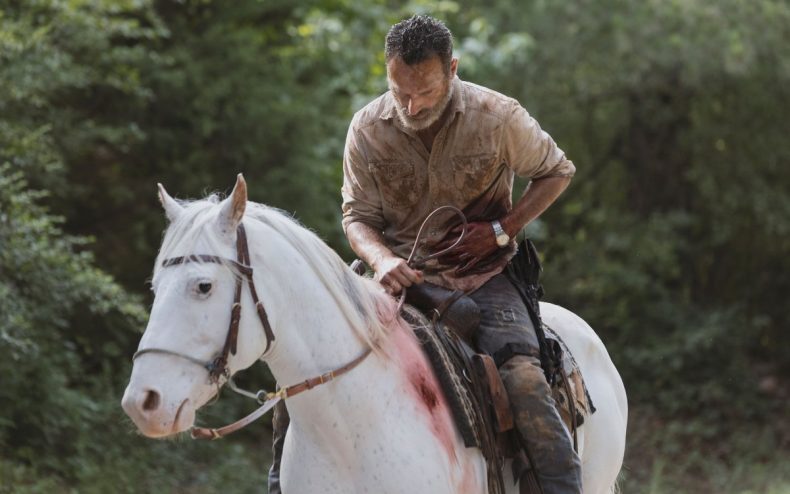 Walking Dead overlord Scott Gimple recently sat down for an interview with EW, which was published today. The main focus: that theatrical film starring a living Rick Grimes, surviving on his own. How’s that going, anyway?

THE WALKING DEAD MOVIE STILL ISN’T READY TO SHOOT Someday, we’ll get this movie, but it may not happen anytime soon. According to Grimes pre-production has been a messy process. “We have a couple of different plans that we’re going with depending on a couple of different factors we have to deal with on everything from story to product aspects,” he says. The script isn’t finished either. “We are currently refining it. I don’t want to say much more than that.”

BUT IT WILL INDEED BE THEATRICAL And Grimey wants you to know this isn’t one of those “cheat” releases where an outfit like Netflix sticks the movie in an arthouse cinema for a couple of weeks just to qualify it for awards shows. “This is a movie that’s going to be watched in the movie theater. Eventually you won’t need a movie theater to see it, but more in line with how movies work.”

THE PLAN IS STILL TO MAKE MORE THAN ONE RICK FILM…FOR NOW When asked if the originally announced plan to create a trilogy was still what they wanted to do, Grimes said yes “but we are still playing with things. That’s the plan right now.” We take this to mean it’s not set in stone.

Grimes also spoke a bit about the plot, but in terms so vague that we didn’t learn much. “Rick will be challenged in different ways that, in some ways, everything that he’s been through has sort of prepared him for. It’s a much larger world than one that he had been operating in, and that was challenging in and of itself. Now things are heightened, and just as we’re going to the movies — and it is the movies proper, suitably wide screen — we’re going to be filling that screen with a brand new world.”

The Walking Dead movie has no release date, and may not have one for a while.