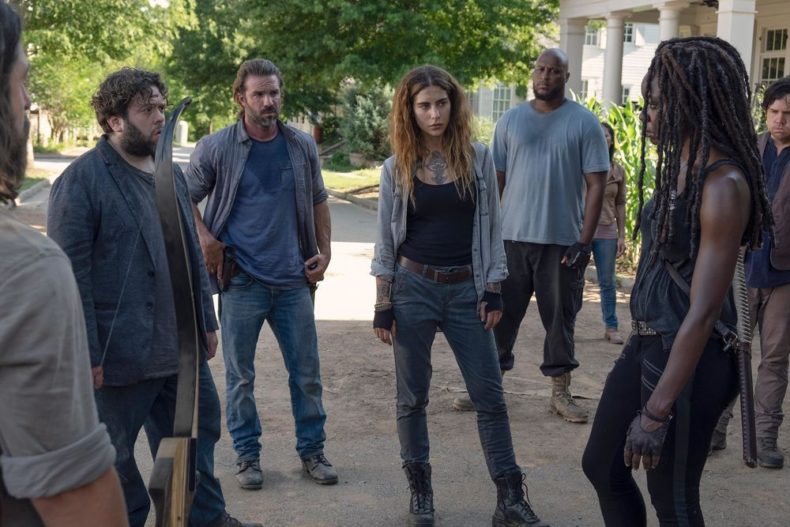 Are the tumultuous changes TWD has gone through this season getting hard to process? Are two time jumps too many, or are you down for seven more? Entertainment Weekly sat down with showrunner Angela Kang regarding the more recent developments on the series she lords over, TWD. Here are the five most enlightening comments from Kang herself:

RJ stands for “Rick Junior” “We thought that was a fun thing, because we had this big reveal of Judith, so we felt like: Let’s give Judith her moment in the sun. But we started setting up really at the beginning of the season that this was something that Michonne and Rick [were interested in]. In episode 3, they go, “Well, let’s maybe start planning for the future in other ways.” That was part of their hopefulness, that they believed that they could build a world where children could thrive. The kind of tragedy of it is that Rick was not around to see this happen.”

Yes, there is a story behind Michonne’s back scar “We will learn that story at some point. What we know is that she has a big X on her back. It wasn’t there before, so it’s something that has happened during that time jump. She alludes to it in the council room when she takes the chances of the group that’s come there. She says that she remembers and that she knows that many of them do too. They have obviously, in the six years that have passed, faced some probably human foes that have affected the way that they deal with new people and their level of trust. It’s definitely something that we’ll learn more about as the year goes on.”

Kang admits some of the storylines from the comic that used Carl could instead go to Henry, or possibly the mini-Rick that looks like a Cabbage Patch doll and sounds like Gizmo from Gremlins “There’s nobody that’s going to exactly replace Carl. Carl is his own character, but there are definitely plotlines from the comic that we didn’t want to completely lose. Henry just organically would be with this time jump about the age of Carl in the comics. There were certain aspects that we felt play well with Henry, especially because Carol is now that parent.”

What about all that weird hair? “Dania was like, “Well, you know, we don’t want the character to look like she’s just old and uninteresting. She’s gotta have her edge. Michonne has an edge.” We were like, “That’s true.” I think she found some different pictures of things. We were like, “Wow, that would be so cool to have that shaved head on the side.” We had to test that to make sure the wig was going to work where she could still do her swordplay and stuff because it’s kind of a challenging thing to have it so short on one side. Fortunately, the hair department and the wig maker were able to fashion something that worked really well.”

“Melissa, at first we were going to keep her hair short, but she was like, “You know, it’d be really interesting to have her grow her hair long.” There’s a whole story behind why Carol has short hair, and we actually have a scene that speaks to that at some point in the season. It’s part of the backstory of Carol and why she has short hair, why she had short hair in her marriage and everything. It really shows where that character is at with her state of happiness. She’s at a place where she feels safe and at peace, and that’s reflected in the hair.”

The hair hasn’t reached its weirdest point yet “There may be some man bun action coming.”

TWD runs Sundays at 9 on AMC for at least two more weeks. It’s worth noting a man bun already appeared on a character during Season 7.