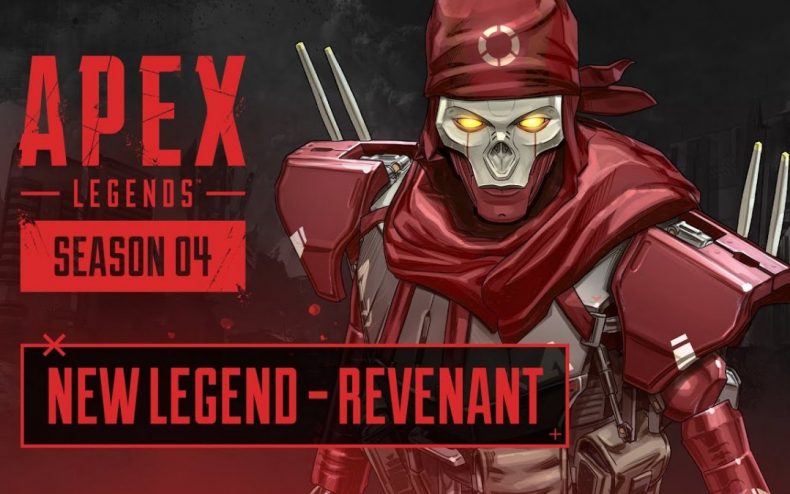 The time for Season Four has come…do we finally know who the latest Legend is? What changes hath he wrought to the world of Apex Legends?

It is indeed the robotic Revenant, as we predicted. His abilities have been revealed, and he’s quite a formidable dude: he can temporarily disable enemy abilities, crouch-walk faster and climb higher than any other Legend, and — the real killer, no pun intended — Revenant can cheat death by dropping a totem that will protect its target by resurrecting it (with one health, so that person will need to be healed quickly). To offset all this power, Revenant takes 5% extra damage from all blows.

With Revenant comes the Planet Harvester, built to do what it says it does by carving a giant fissure through Capitol City. Now the city is divided into two zones, Fragment East and Fragment West. Season Four also introduces a new weapon, the Sentinel Sniper Rifle, which can fire a powerful charged shot if the player has the shield battery attachment equipped.

The full patch notes from Respawn are posted below Revenant’s video.

The Sentinel has a limited amount of energy that decays slowly over time, and loses a big chunk of juice for each shot. Once the energy runs out, the energized state ends.

Developer Note: Apex guns move around subtly while ADS — they rotate and sway as you move your aim, they bob up and down and side to side while moving, etc.

We have special tech that makes sure the reticle on the optics stays centered even as the gun moves around a bit. However, until season 4, the ironsights on weapons didn’t have this tech. That meant that the ironsights reticles could move around with the weapon and actually be slightly inaccurate — they wouldn’t point at the screen center where the next shot would fire. With season 4, we have updated most of the weapons’ ironsights to properly stay centered now. Not all ironsights are upgraded yet, but we will be updating the remaining weapons as this season progresses. The weapons that will be updated for Season 4 are:

The following will be the new set of Gold Weapons for Season 4:

PLAYERS CRASHING WITH DXGI_ERROR_DEVICE_HUNG Some player are experiencing an issue where Apex is crashing with a “DXGI_ERROR_DEVICE_HUNG” error message. We are working closely with NVIDIA to help determine the cause of the issue and provide gamers with a solution (via updated driver or game patch) as soon as possible.

Developer Note: With this patch we’ll be pushing out changes globally to matchmaking that we’ve been testing in specific regions. We’re well aware that this has been a contentious topic among players and there’s been some misinformation out there so just to be clear: skill-based matchmaking has existed in Apex since launch and we’ll be continuing to improve it over time.