Is Breaking Bad a Prequel to The Walking Dead? 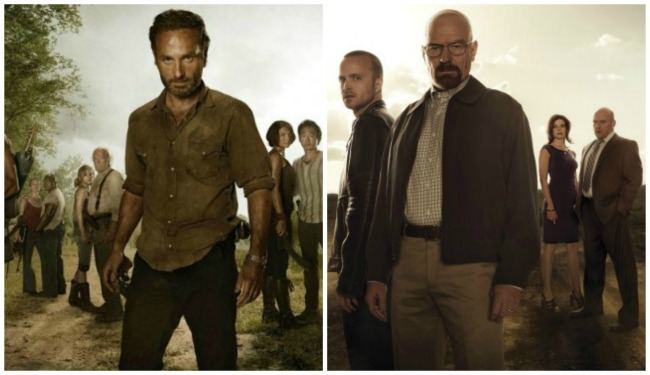 The clues are there, says HitFix writer Donna Dickens. You just have to look.

“Doesn’t that Dodge Challenger Glenn steals (in season one) look a little familiar to ‘Breaking Bad’ fans? It should,” she writes.

So, yeah, the Dodge Challenger is the same one that Walter White bought for Walter Jr.

Finally, Daryl recently opened up about Merle’s dealer, who will sound pretty familiar to fans of Breaking Bad’s Jesse Pinkman, for whom “bitch” is his favorite noun, verb, adjective, and adverb.

So, the way I see it there are two possibilities. As Dickens suggests, Breaking Bad and The Walking Dead exist in the same universe, and possibly Blue Sky was such good stuff that it literally turned people into walkers and created the ZA (zombie apocalypse).

The biggest logistical problem with all of this, of course, is how it all traveled from New Mexico to Georgia. But it’s not impossible, all of these items and people could have conceivably traveled there after the end of Breaking Bad. Maybe running from the start of the ZA.

The other huge problem is that if The Walking Dead Creator Robert Kirkman ever has a plan to reveal exactly what started the ZA, it almost certainly won’t be that. The comic started in 2003, five years before Breaking Bad did.

Or two, shows on the same network sometimes like to have fun with winking references to each other. Let’s also take a second to notice that the section of HitFix Dickens’ article appeared in, Riot, is a comedy section.

So for now I’m going with the second one, but the way The Walking Dead throws twists out there, who knows? If nothing else it’s something fun to speculate about while we wait out the long dry spell until October.

Images from Hitfix and The Atlantic

Disappointing Walking Dead Trailer During Breaking Bad Premiere
Be the first to comment!
Leave a reply »