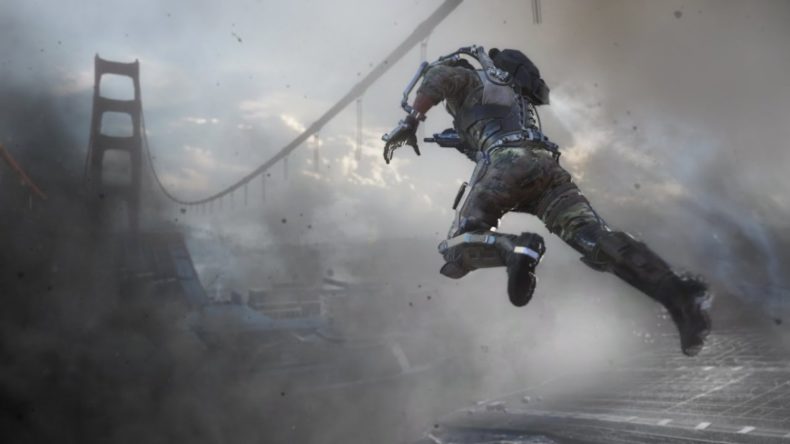 This new trailer for Sledgehammer Games’ Call of Duty: Advanced Warfare was released as part of Microsoft’s Gamescom press conference today and is appropriately named Collapse. It features a hunt for terrorists that ends with the destruction of San Francisco’s Golden Gate Bridge.
Yep, the good guys fail. The way the enemy destroys the bridge is also suitably futuristic, given the the theme of the game. Want to bet that Kevin Spacey’s character, sinister CEO of private military contractor Atlas John Henry Irons, is somehow secretly behind the carnage? Sorry, I won’t bet against that, that’s a sucker bet.
The level is action-packed and shows off several of the new abilities in the game, including the ex0-skeleton’s boost and ability to use car doors as shield, plus very useful grenades that can mark enemies, take out drones with an EMP, or just fly towards enemies and take them out like a lethal jumping jack.
A run down a bridge is about as linear and straightforward as a level can possibly get, however, and this level also seems to epitomize the annoying Call of Duty tendency of yelling at you what you should do at all times, as if you might forget your objective from moment to moment. Hopefully other levels in the game will seem more open and less constrained.