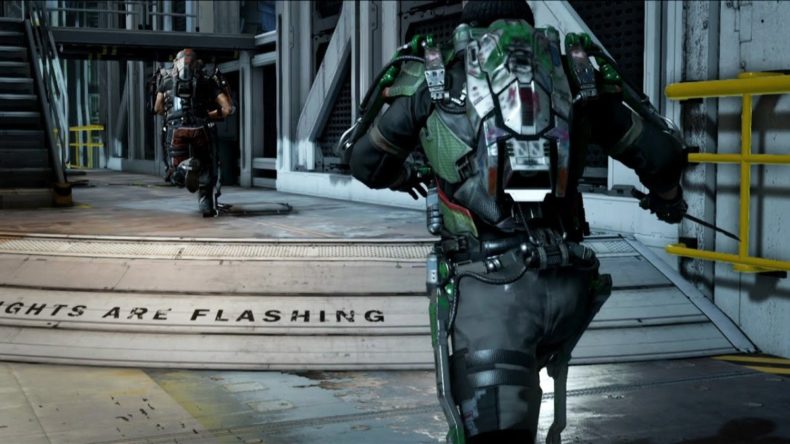 Sledgehammer Games shared its long-awaited first look at Call of Duty: Advanced Warfare multiplayer with a live event today, showing off the futuristic Call of Duty experience it will be offering players November 4.
First up is the trailer above. The main thing that’s evident is that even though this is Call of Duty with jet-boosts, it’s still very much Call of Duty. You don’t see anyone wall-run, unless I missed it, and despite being futuristic and featuring armor and directed energy weapons that look a bit like lasers it also doesn’t have any sort of Halo feel.
In addition to what you can see in the gameplay. According to Kotaku and Polygon, the new game will feature a revamped version of Call of Duty: Black Ops 2’s Pick 10 system, now called “Pick 13.” You’ll have 13 points to spend towards your loadout. That loadout will include weapons, perks, exo-suit abilities, and even scorestreaks. Yes, scorestreaks are returning to the game, with the twist that now the scorestreak items can also be modified and upgraded using the points.
There’s also a new loot system called Supply Drops, which will give you cosmetic items and weapons for gaining ranks and meeting challenges. The gear comes in three types of increasing rarity, Enlisted, Professional, and Elite. The loot includes a new item called reinforcements, which function a lot like burn cards in Titanfall. They give you special abilities, but you can’t save them up and have to use them in your next match.
It also seems like this game is going to be a loot heavy experience. An insane amount of gear, both lethal and cosmetic, has been shown so far. Check MP1st for a list.
Four multiplayer maps have been shown to the press, you can see glimpses of some of them in the video. They include: Biolab, a secret base filled with canisters of toxic orange goo that can be detonated by players; a ruined prison map called Riot; a bunker called Defender that features a tsunami event to sweep players away; and a space elevator called Acend that practically screams “vertical” gameplay.
There are 12 multiplayer modes. These include returning favorites like Team Deathmatch and Capture the flag, but also new modes like uplink, which is a fight for control of a satellite drone.
Finally, instead of sitting in the lobby and twiddling your thumbs, you can enter a virtual firing range to test out your loadout while you wait for the game to start.
You can watch the event for yourself at the Xbox Twitch channel, here.