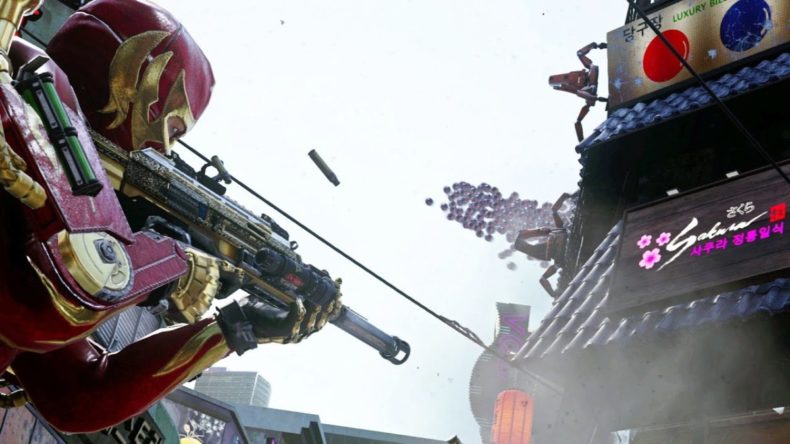 Here comes Call of Duty: Advanced Warfare’s final batch of DLC! Reckoning will be downloadable starting tomorrow on XBox One and XBox 360, and to announce the occasion, Activision has released the official trailer today. Check it out below….

The content you get includes the final four maps: Overload, a compound in New Baghdad decorated with plasma lamps that you can shoot (resulting in satisfying enemy annihilations), Quarantine, set in and around a biological testing center on a remote island, Fracture, an arctic excavation site on the shelf of a glacier that is slowly melting (keep moving; parts of the map WILL break under your feet), and Swarm, taking place in downtown Seoul, South Korea.
The pack also includes Descent, the conclusion to the Exo Zombies saga. Following the discovery that one of their own (John Malkovich – In the Line of Fire, RED, Burn After Reading) is now among the undead, the squad (Bill Paxton – Aliens, Titanic, Edge of Tomorrow, Rose McGowan – Planet Terror, Scream, Jon Bernthal – Fury, The Wolf of Wall Street and Bruce Campbell – Burn Notice, Bubba Ho-Tep) find themselves in a difficult situation as they attempt to discover the true cause of the global pandemic and the terrible secret that Atlas has been hiding.
It all starts tomorrow, August 4, for $14.99 (or as part of the $60 Season Pass if you already have it). Call of Duty: Advanced Warfare Reckoning comes to XBox One and XBox 360 August 4, and Playstation consoles one month later. (This is your last time getting DLC first, XBox owners — relish it.)