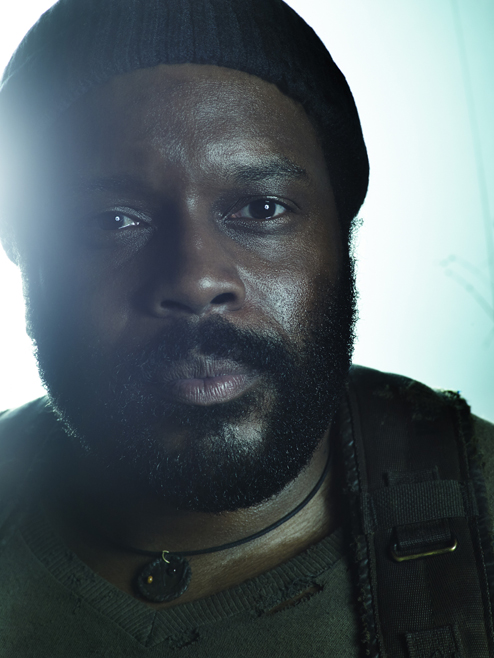 After watching “What Happened and What’s Going On,” it might be easy to take away a pessimistic message. That Tyreese was wrong to be optimistic, to try to hold on to his humanity because he was confident the world would get better one day. After all, look what happened to him.

But actor Chad Coleman doesn’t see it that way.

In an interview with Entertainment Weekly, Coleman said that the apparitions of the Governor and Martin that visited Tyreese as he lay dying made compelling points, but ultimately Tyreese was right to reject them.

“So I was being revisited by all those that said, ‘You should have done it that way, I told you that you needed to be more violent. I told you. I told you.’ And so it’s just weird how that was coming back at him on his way out, because I believe there’s a certain level of guilt there, you know? A certain level of, ‘Damn it, maybe I should have done it that way,’ But no, I knew my way was the right way. It’s just a very unforgiving world,” Coleman said.

That unforgiving world was ultimately too much for Tyreese, personally, despite a valiant fight with his inner demons he eventually decided he’d done enough and let go. But Coleman hopes the character’s example will continue to inspire the other survivors to be better and try to make a better day.

“I think that the way I went out is the way Tyreese was supposed to go out. It was poetic, it was like beautiful justice, you know? I think he had done all he could do in the world too, and so he left them with his humanity. And I hope that humanity continues to fuel the rest of the characters on—my sister, and Rick, and Daryl, and everybody else. They know what I meant to the team, and so I hope they just continue to carry that level of humanity that he had,” Coleman said.

Coleman said leaving The Walking Dead was a very emotional experience. There were a lot of hugs to go around on his last day, even though he was covered in fake blood. He also shared the details of his “Death Dinner,” a The Walking Dead cast tradition for departing cast members. Turns out the show had killed off so many characters in such a short time it was a combination death dinner.

“It was amazing. We went to a producer’s home and had the fire in the back yard and we all went and kind of circled around the fire, and everybody just had beautiful, heartfelt sentiments. It was myself and Emily, because Emily had died too. And then, in a certain manner of speaking, it was also for Gilliard, because he bit the bullet too. So it was all of us there, and to hear Gale Anne Hurd just speak—just a beautiful sentiment. And Michael Cudlitz and Danai and Reedus— It was just amazing, man. It’s hard, okay. You know, I’ve kind of been removed from it a little bit, so it’s coming back on me right now. It’s like, wow. It was an amazing time,” Coleman said.