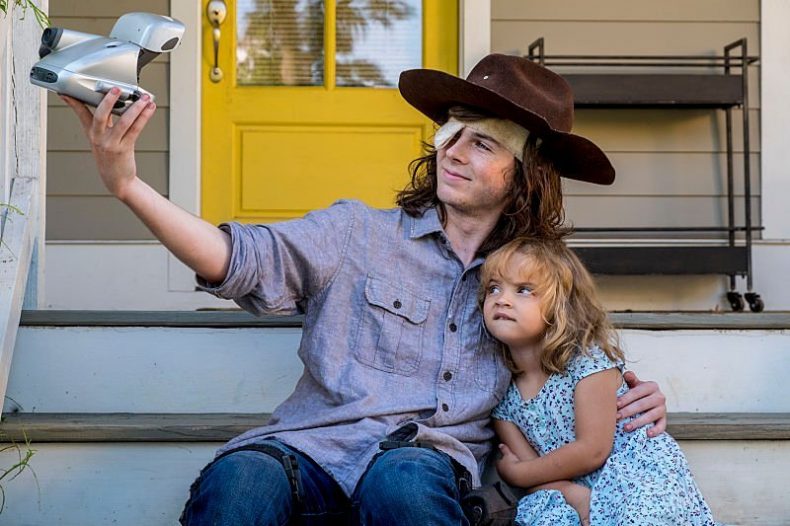 Did you catch last night’s TWD midseason premiere, in which Carl finally bit it? What are Chander Rigg’s thoughts upon leaving the series?

“I was very happy with the way Carl ended up going out,” Riggs said to Comicbook.com. “After reading the script, it made me feel a lot more comfortable with it and really excited to really show off what I can do in this last episode. This last episode it was some of the stuff that I’m most proud of. It’s super, super exciting to finally be able to talk about it and have people see my work.”

So what will Riggs do with all that extra time not pretending to be Carl? In addition to continuing his college education, Riggs is pursuing an interest in music. “I’m actually producing music kind of on the side, and I’m starting to play some shows and things like that,” Riggs told a local LA news station. “I’m doing that and acting, it’s quite a lot to juggle but it’s a lot of fun.”

It was revealed in last night’s episode that the fantasies of Rick as an old man actually belonged to Carl, and they were his hope for the future. Said fantasies were pie-in-the-sky enough that Negan shows up at the end, peacefully tending to a garden. Psychopaths generally don’t reform that drastically, but even if Negan will never express compassion for anyone, Jeffrey Dean Morgan will:

You, my friend, are an incredible young man. Well before joining this cast I was a fan… a fan that loved watching you grow up in front of a camera. From the moment you first put on the way too large sheriffs hat as a boy… to the end, the hat so befitting of the man Carl had become. Wiser and more compassionate than all of us. You held all of our hearts.

Riggs sent one final message over Twitter before his last episode aired, thanking his fans. “None of us could have done this without you. It was always for the fans, and it always will be. So thank you for giving me this chance to let me pursue my dream and continue to make you angry, sad, happy, and everything in between. I won’t let you down.”