Danai Gurira on What Drives Michonne in “After” 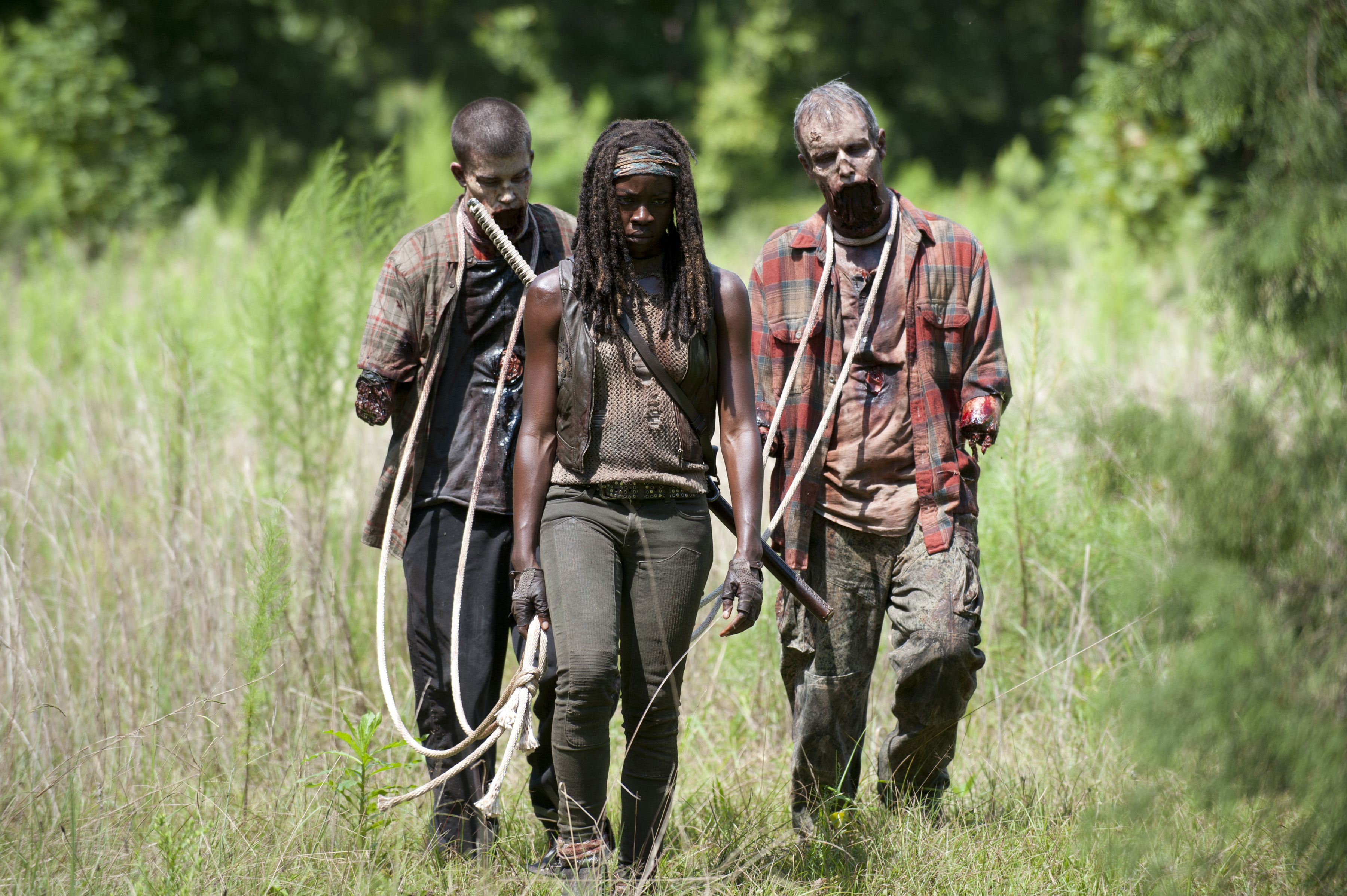 Last night’s The Walking Dead episode, “After,” was a harrowing look at the new status quo of our characters.

But if you’re a Michonne fan, only one scene is burned into your brain this morning. If you haven’t caught the episode yet, read no further, because after this be spoilers, and the scene is something you definitely want to see for yourself first.

Danai Gurira talked to Entertainment Weekly about Michonne’s dream of her past and what she thinks Michonne’s “answer” is.

In the dream sequence, Michonne is clean and in a beautiful apartment, making a snack and discussing art with her lover Mike and a character that may be Mike’s friend Terry from the comics. Her young son is there with her and she is happy.

The ugly real world slowly intrudes on the dream, however, first replacing Michonne’s kitchen knife with her sword. Then she sees Mike, battered and hopeless in a refuge camp, asking what the “answer” to all of the pain is. Then she sees Mike and his friend without arms, implying that they became walkers and Michonne’s first “pets,” and her son disappears.

” I loved the concept of the flashback as a dream,” Gurira told Entertainment Weekly. “It’s her subconscious forcing her to metabolize her pain and her loss and her grief. Her conscious mind won’t let her do that because she just shuts it down, which is deadening her and making her the shell that she was at the beginning when we met her. You couldn’t read her and she didn’t want you to. Her subconscious is really forcing her to face her pain and her loss. For the production, it was really fun. The makeup department had fun. We were trying to decide what nail color and what make up to use. And then we had great fun with the outfit. Everyone had their thoughts and we found the one we loved. With the hair I had the idea of crimping it up. We had so much fun putting together who Michonne was before. She had an alternative vibe to her but liked to be cute. She wasn’t trying to wear Gucci or Prada. She had her own hip energy.”

As for what Michonne’s “answer” to Mike’s suicidal cynicism was, Gurira has her own idea.

” I think that it’s what she goes on to do. Find the people she cares about. As long as people you care about still exist then you carry on for others. And there will always be others. She thought there was going to be nobody after the loss of her son and her man, but she finds a group of people that she deeply cares about. She finds the Carls, the Ricks, the Daryls, the Hershels. She finds a group of people who she can devote herself to again, which she’s good at. She takes care of business. She protects people well. When the rubber hits the road, she goes and takes care of the Governor before he can cause any more destruction. She knows it’s part of her DNA, it’s part of her strength, to take care of Andrea. She knows she does that well. The answer is: you keep taking care of people. You keep being a part of people of a community because if you don’t do that, if you isolate, then you start to die,” Gurira said.

The entire interview is fascinating, though Gurira understandably is cagey with hints of future episodes. Check it out here.

Michonne To Be Played By Danai Gurira In Season 3
Be the first to comment!
Leave a reply »