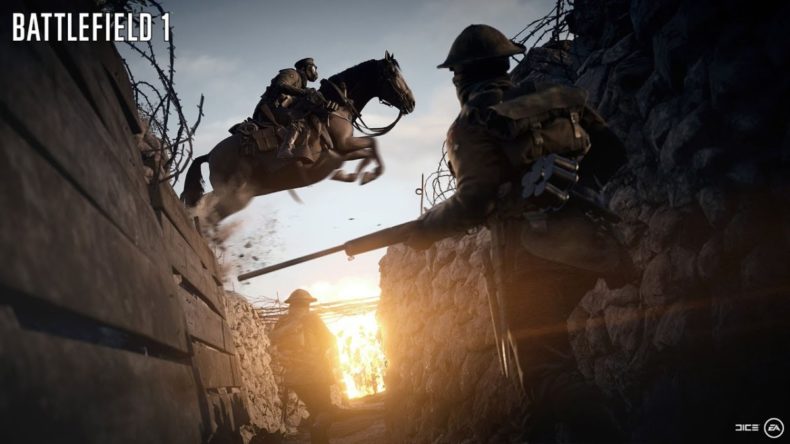 EA showed off a new trailer for Battlefield 1 during its EA Play conference this morning. Try to ignore the tonal clash between the hip-hop soundtrack and the early 20th century visuals.

Besides the seldom-seen Great War setting, what else is DICE bringing to the table that’s new? Here’s what EA had to say:

Intuitive destruction and dynamic weather ensure that no battle is ever the same. For even more gameplay possibilities, carve a path through walls and buildings, take down your enemies in creative ways, and leave your mark on the terrain around you through intuitive destruction. Through your actions, the pristine world around you will change into a battle-scarred landscape, changing the world forever.
With dynamic weather you will need to adapt your tactics to weather changes as the elements play a part in the battle. Playing the same map on a bright day, in heavy fog, or rain will impact what you see and hear, forcing you to adapt your play style on an ever-changing battlefield.
Operations introduces a completely new way to play multiplayer. In Battlefield 1 will you play a series of interconnected battles across multiple fronts. Play a sequence of battles where your actions have consequences beyond a single match, as you try to conquer territory or push back your attackers.
At those times when you feel all is lost, call in the Behemoths – the largest fully player-controlled vehicles ever seen in Battlefield. Roam the battlefield and rain fire on your enemy to break their defenses. All-out war never felt so epic. Take control of the Armored Train, Air Ship, or the Battleship to dominate the battlefield across land, air, and sea.

Polygon has posted a full interview with the developers of Battlefield 1 where they reveal the thought process that led to Battlefield 1, what they’ve learned from mistakes made in past Battlefield games, and how research into the actual events of the conflict shaped the scope of the game. If you like what you see in this trailer, it’s worth a read.
Battlefield 1 comes out October 21, 2016 for Playstation 4, XBox One and PC.