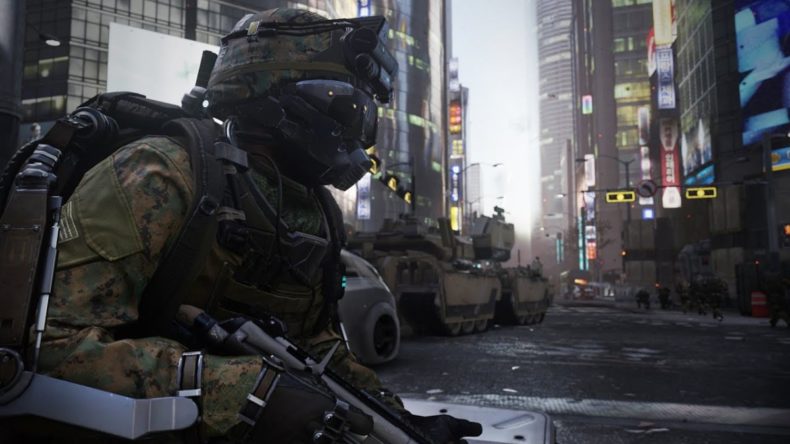 Here’s the new E3 trailer for Call of Duty: Advanced Warfare. Gawk at nearly 10 minutes of gameplay from Sledgehammer’s upcoming shooter. The trailer was shown today by Microsoft at its conference.
There’s nothing here that really seems to revolutionize the FPS. In fact, this earlier level follows a lot of the same beats that you’ll see in other shooters. The part at the beginning where Mitchell has to close a blast door reminded me of the intro to Battlefield 4 and shooting the window of the submerged car. You’ve also got characters telling you stuff you should know and holding your hand a bit, the same things you see in every intro level.
But the execution is very nice. There’s a huge amount of stuff going on. There’s very high quality facial animation. The weapons and other systems that are introduced seem interesting, I especially like the smart grenades.
I was also slightly surprised by how much sci-fi stuff I saw in this Call of Duty that its creators call “not scif-fi.” I’m pretty sure giant mech tanks and drone swarms big enough to give a Gears of War vibe are a few years out. And this is from before the protagonist gets his Six Million Dollar Man upgrade.
We also found out that Microsoft would get the Advanced Warfare DLC first, but since that’s already the norm, it’s not such a big surprise.