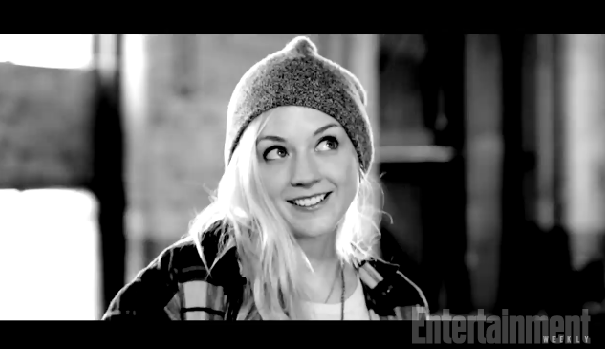 Beth may be gone for good, despite fan petitions to the contrary, but it doesn’t seem to be getting Emily Kinney down as she focuses on her music career in a perky new music video.

The new video and song for Kinney’s “Rockstar” sees her singing about marrying a rock star, not actually being one. But we figure Kinney, who has a new album planned later this year, wouldn’t mind rock stardom one bit.

Kinney wears a cute plaid shirt, knit cap and MTV t-shirt as she and several of her friends, or at least dancers hired for the video, dance around in a run-down building that could have easily served as a The Walking Dead set. The look of the video is very much a 90s pop throwback, but the song is very 2014 with social media savvy references to Instagram and being “Twitter verified.”

And even though Kinney’s not on The Walking Dead any more, the song makes it clear she’s still got connections, promising that she’ll send her rockstar “unreleased Walking Dead episodes.”

You’ll have to go to Entertainment Weekly to see the video, it’s exclusive to there. You can also download the song from iTunes. Give it a watch/listen and tell us what you think.