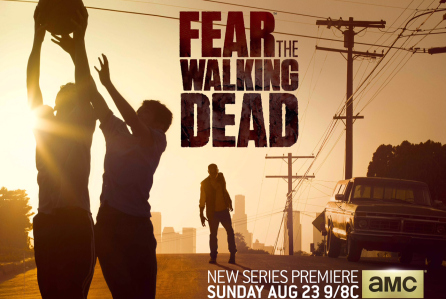 In anticipation of next month’s premiere, artwork for “Fear the Walking Dead” – the companion series to AMC’s popular hit television series, “The Walking Dead” – has been released. The art shows a couple dudes innocently playing some pick-up hoop game against a backdrop of the downtown Los Angeles skyline as a zombie ominously approaches – and he likely is not going to be asking them to pass him the ball so he can launch a three-pointer.