Fear The Walking Dead “Not Fade Away” Recap 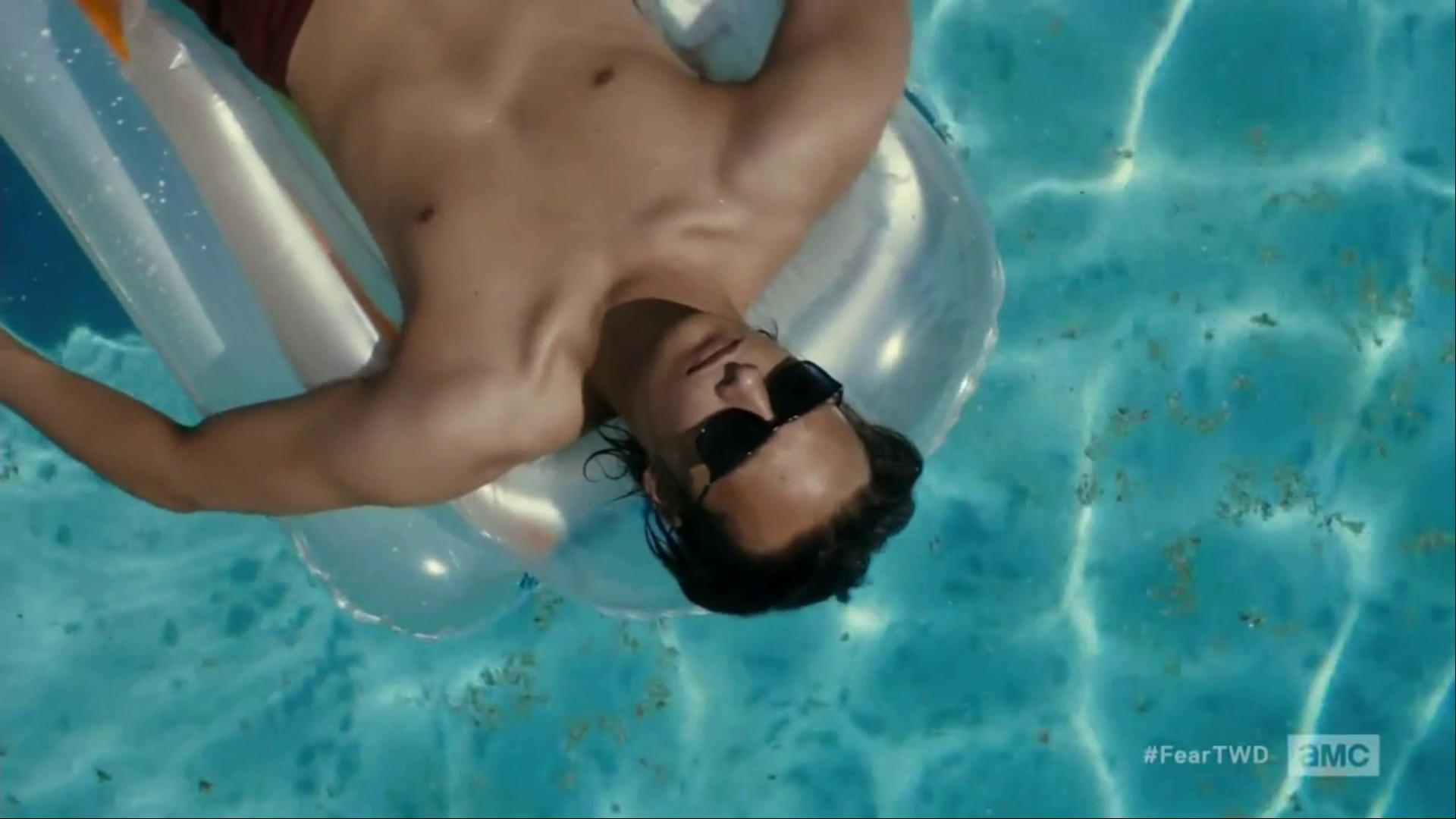 They tried to mix things up with the opener to this one, with a series of arty shots slowly revealing Crazy Nick lounging around on an inflatable chair in the middle of a pool. It’s revealed a minute later via voice-over that this episode time-jumped seven days ahead of the previous one. I’m assuming the fall of society means they haven’t had access to enough fresh water to refill a swimming pool, and in this case, I wouldn’t be in there. The sight of the leaves and debris floating around him proved my point — it really needs to be disinfected. But then again, so does Nick.

In addition to the time-jump, the opening narration also explained the situation the neighborhood was finding itself in: the army boys that had shown up in the last minute of Episode Three boxed in the area with fencing and wire. Neither Travis or Madison’s families ever got out, and now they’re stuck, not sure how to feel about their new “green friends,” as Chris put it. Wait, who was Chris again? 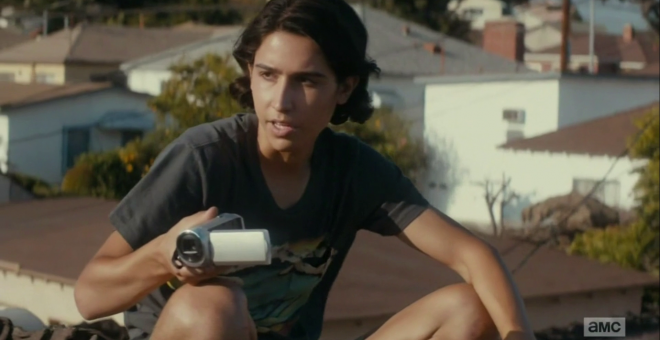 Right….Travis’s kid that he had with his ex-wife. Chris’s involvement in the plot has been so minimal I keep forgetting he’s there. Hopefully this episode signals a change, as he got to do substantially more. He mainly spent his time on the roof today, shooting videos of the situation while explaining to his “viewers” what’s happened lately. This was convenient for people watching the show, but in the context of THIS “reality,” who is he talking to? Logic suggests his YouTube followers, but the Internet can’t still be up, can it? Not the way the townspeople were begging the army for answers. 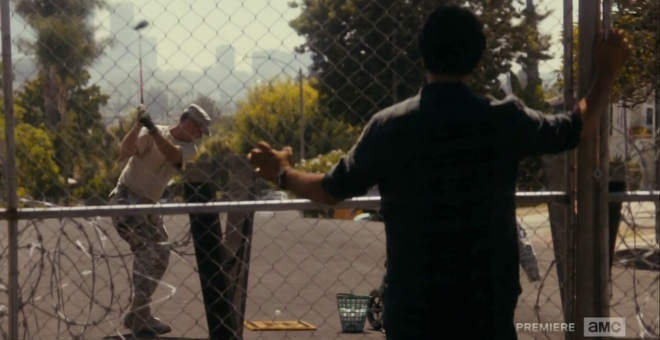 What didn’t help things was the way people started…disappearing. Since they still don’t fully know what’s going on yet, the National Guard has been quarantining anyone who appears to be “sick” no matter what they’ve got. Someone named Thompson vanishes overnight, and his distraught wife motivates Travis to question the man outside the fence about it. He casually tells Travis Thompson was suspiciously ill and had to be carted away, while he practices his golf swing for no particular reason other than to illustrate how much he doesn’t care. 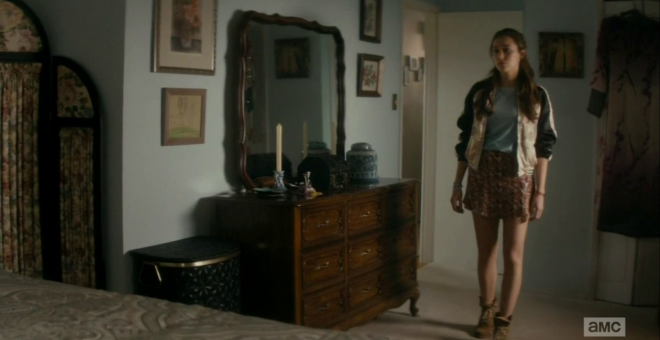 It was Alicia’s turn to sit the episode out. She got a couple of scenes, mainly to mourn over her dead boyfriend, then attempt to use a needle and ink to make his fading tattoo permanent. If you’re wondering if this works, I knew someone in middle school who wanted a tattoo and did exactly this. He showed everyone at the lunch table the blotchy mess on his leg while his face beamed with pride. We never found out if the tattoo stayed or if he had to spend hundreds of dollars to remove it later. 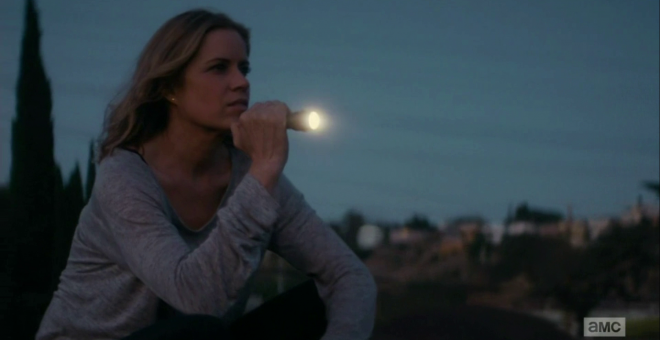 While Chris is on the roof, he spots a curious light flashing from a house on a distant hill, as if someone was sending a signal. Initially, the family doesn’t believe Chris when he says he saw proof that there’s life in the Demilitarized Zone. But he’s persistent on insisting, enough so that Madison decides to climb onto the roof and start blinking her own flashlight. At first nothing happens, but as day turns to dusk….the blinking light comes back. Madison decides to investigate the matter herself — breaking right out of the compound. 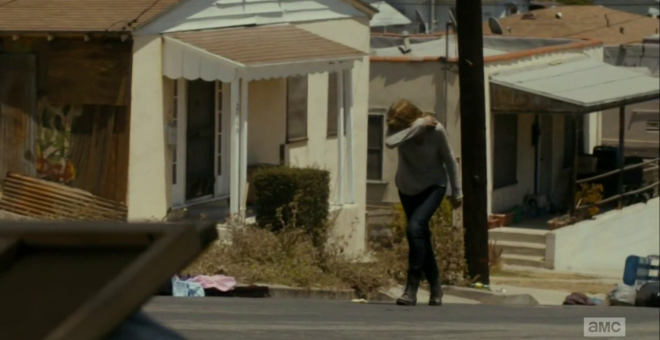 This is the most interesting thing that’s happened yet. We’re made aware of the stakes. If she gets caught, she gets shot. We know they’ll just tell Travis she “disappeared” or got infected. Her feelings of panic turn to nausea as she finds the street littered with bodies, some half-zombie, some curiously healthy. At that moment a full line of soldiers comes marching her direction. Fortunately, Madison was able to hide and hold her nose, and she made it back before even her family noticed she was gone.

Madison is very shaken now, having witnessed the full horror of their situation. So when she discovers Stupid Nick in someone’s house, breaking into their stuff while looking for pills, she simply won’t have it. And what happens next……oh boy!

Madison actually turns on Crazy Nick and slaps the crap out of him! Not just once, many many times! All while yelling “YOU HAVE NO IDEA! YOU HAVE NO IDEA!” Then she storms off, and afterward, Nick is oddly private about his injury, refusing to leave his room when Alicia and Travis demand he do. 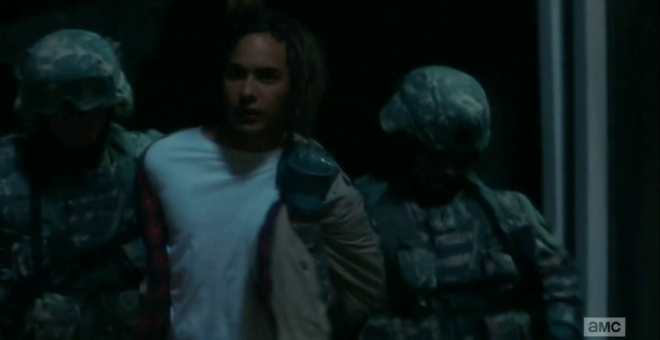 Here’s the end-of-episode twist: the army thinks CRAZY NICK is one of the infected. I would probably make the same mistake too, but still.

It would be an interesting twist if he really was a zombie the entire time. So why doesn’t he rot? He’s Patient Zero. He started the entire thing!

It’s a good bet that the entire family is going to remain within this new compound until the season ends. It’s typical for Walking Dead-ites to pick a spot and stay there for an extended period of time, I suspect for budgetary reasons. As for whoever was making that light blink, we will never know, because when Travis tried to look on the roof, he saw that light followed by three much brighter lights. Followed by no lights. 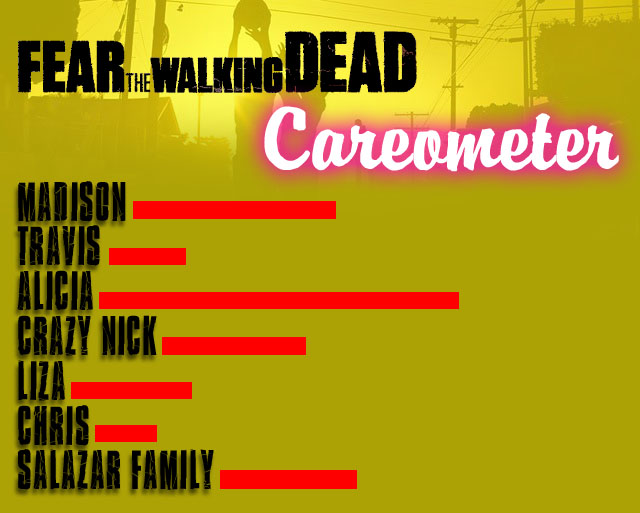 This week, the Careometer was put to its first true test. Madison willingly put herself into a situation where she was risking everything. Did I care if she made it out alive? The answer, I found was…..yes, yes I did. Madison’s bar rises. Her husband wasn’t as daring, and stayed flat.

In addition, they’ve put one of the cast members in real mortal peril, and it happens to be Crazy Nick. Do I care? Eeehhhhhh….? His own mother just beat him up and I relished it. That’s not a good sign.

Alicia hasn’t changed. Liza is Liza. Chris has finally risen, but anybody would after the near-nonexistence he’s suffered the first three episodes. We got some unexpected development for the Haircut Family, now known as the Salazars, whom I expected to leave the show after the previous episode. An emotional conversation with Mr. Salazar about his past and a few moments with daughter Ophelia fleshed them out and rose their Careometer bar an inch.

Side note: Can anyone read the title “Not Fade Away” and prevent their minds from immediately playing “Come sail away, come sail away, sail away with meeeeeee” in a constant loop? Or is it just me?