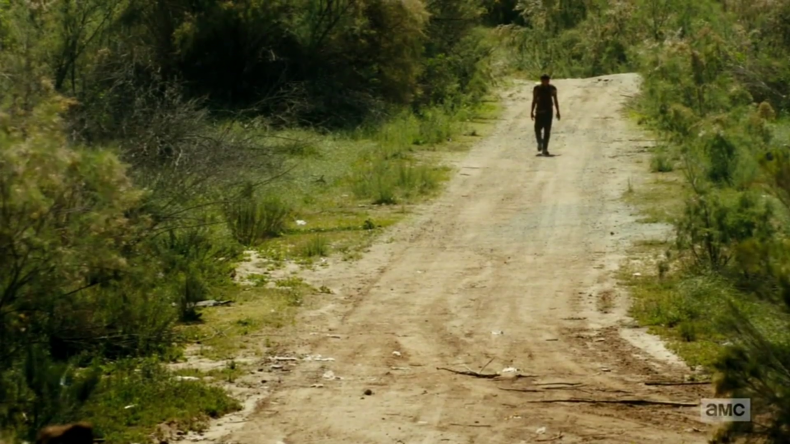 Some people hold the opinion that The Walking Dead’s best episode was its pilot. Those moments where Rick Grimes is completely alone, exploring a strange new hostile world for the first time, aren’t repeated in any other episode, and they feel deeply atmospheric and rich in a manner no other episode does. It would follow, then, that this should be Fear The Walking Dead’s best episode…but we’ll see. There’s a difference between watching a survivalist like Rick, whom you know will survive, and Crazy Crazy Nick Clark, whose reckless decisions too often make you want to scream at your TV. 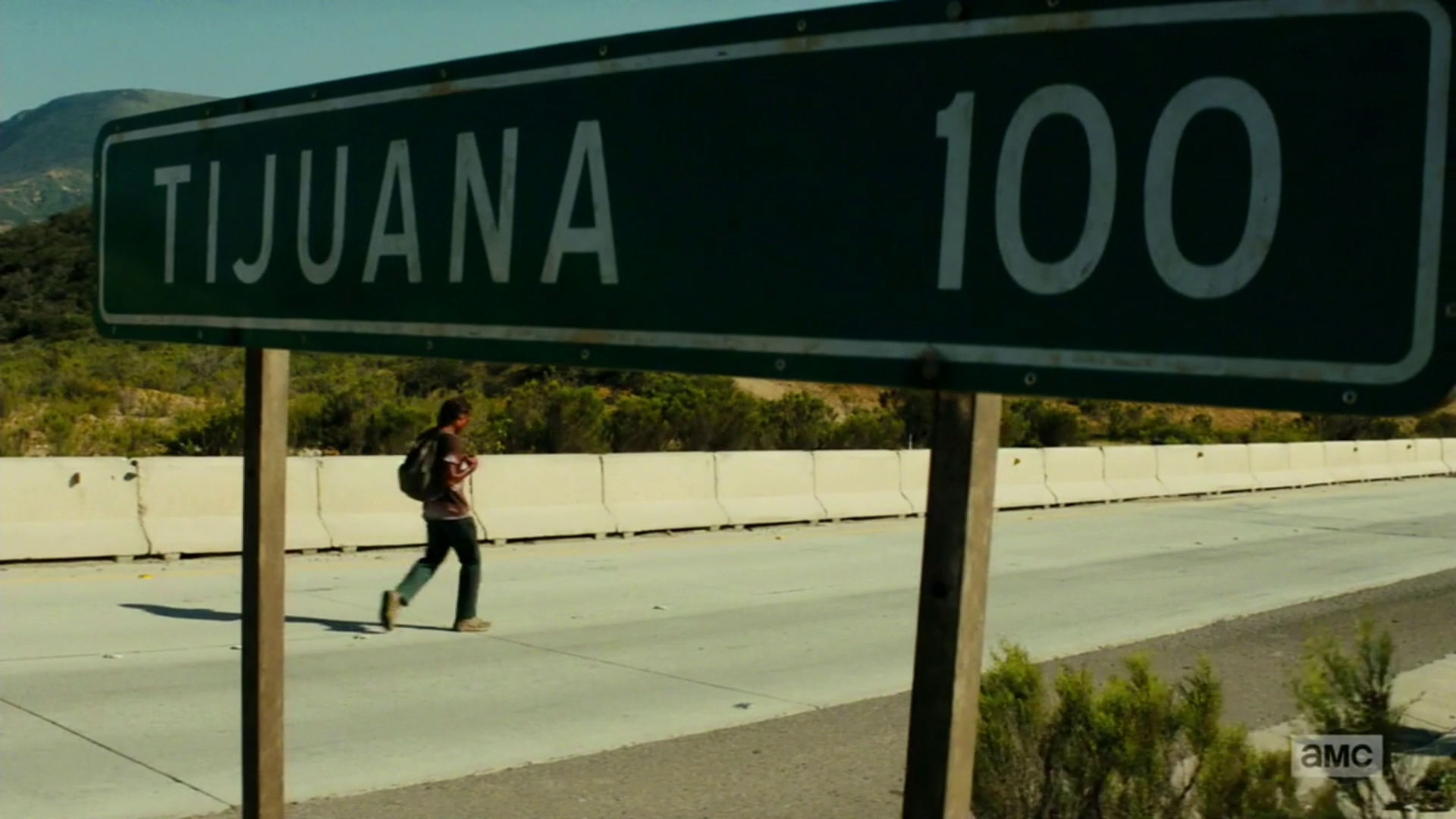 At first, though, that didn’t look like it was going to be the case. As he hit the road to Tijuana, Nick was uncharacteristically resourceful. He brought with him a backpack full of supplies, among them a gallon-full of fresh water that he carefully checked now and then to make sure he wasn’t drinking too much of it. Nick hiked the rest of the day, conserving his energy, until he found a safe abandoned house to sleep in. He made a small fire to make sure the night wouldn’t give him hypothermia and went to sleep. Was this the new Nicholas? Careful, crafty, normal, sober Nick? I missed the crazy one already. 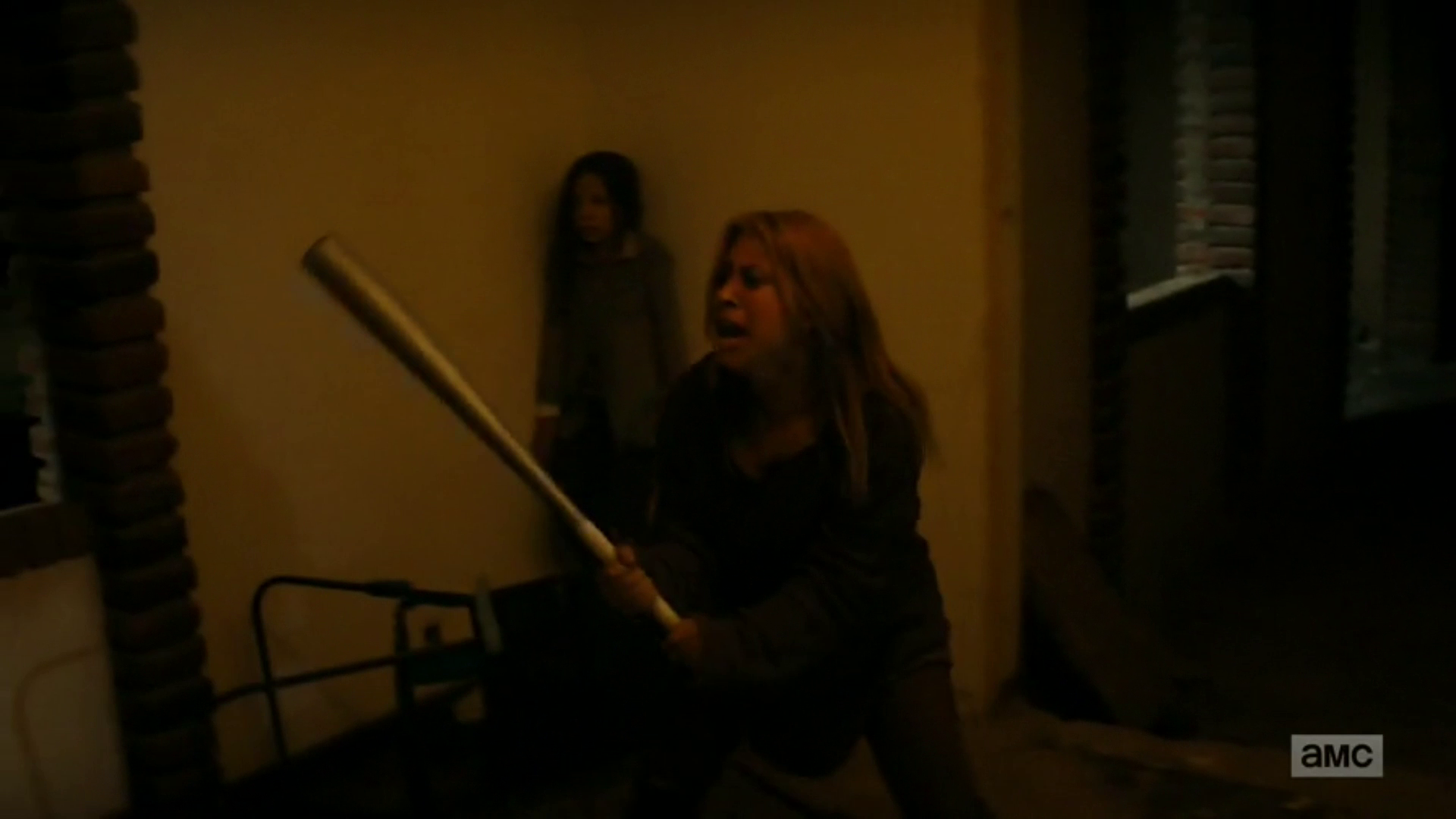 Fortunately, all it took to put the Crazy back into Nick was to separate him from his stuff. That house he picked wasn’t so abandoned after all, and he was woken immediately by an angry woman and her daughter. He couldn’t tell them he meant no harm because he didn’t know Spanish (an important detail if you’re going to survive on your own in Mexico). This set into motion a comedy of errors that would have Nick drinking his own pee before the episode was half-over. 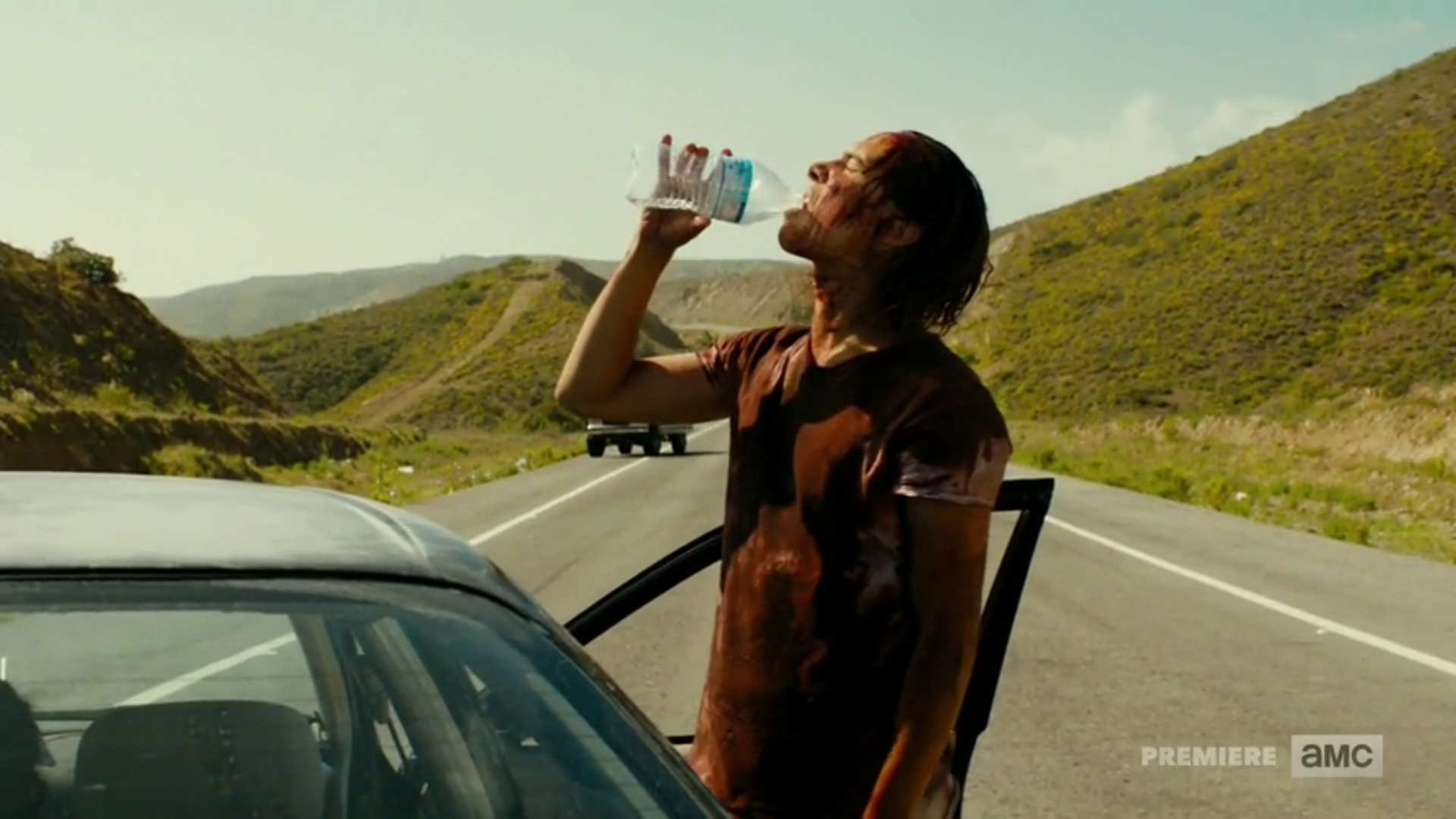 The following day, Nick is stumbling along the highway thirsty as a dog. He’s got to stave off dehydration somehow, and fortunately he finds some bottled water inside an abandoned car. Too bad the car still has its zombified driver inside — no, wait, Crazy Nick doesn’t even care. He just reaches in there and grabs the bottle while the monster tries to bite him. Then he realizes there’s a perfectly good radio inside the car, so he reaches inside AGAIN. Nick told Madison earlier this season that he believes he can’t die. He meant it. His main quest is for water, but along the way, he almost-dies so many times without noticing, it’s insane. 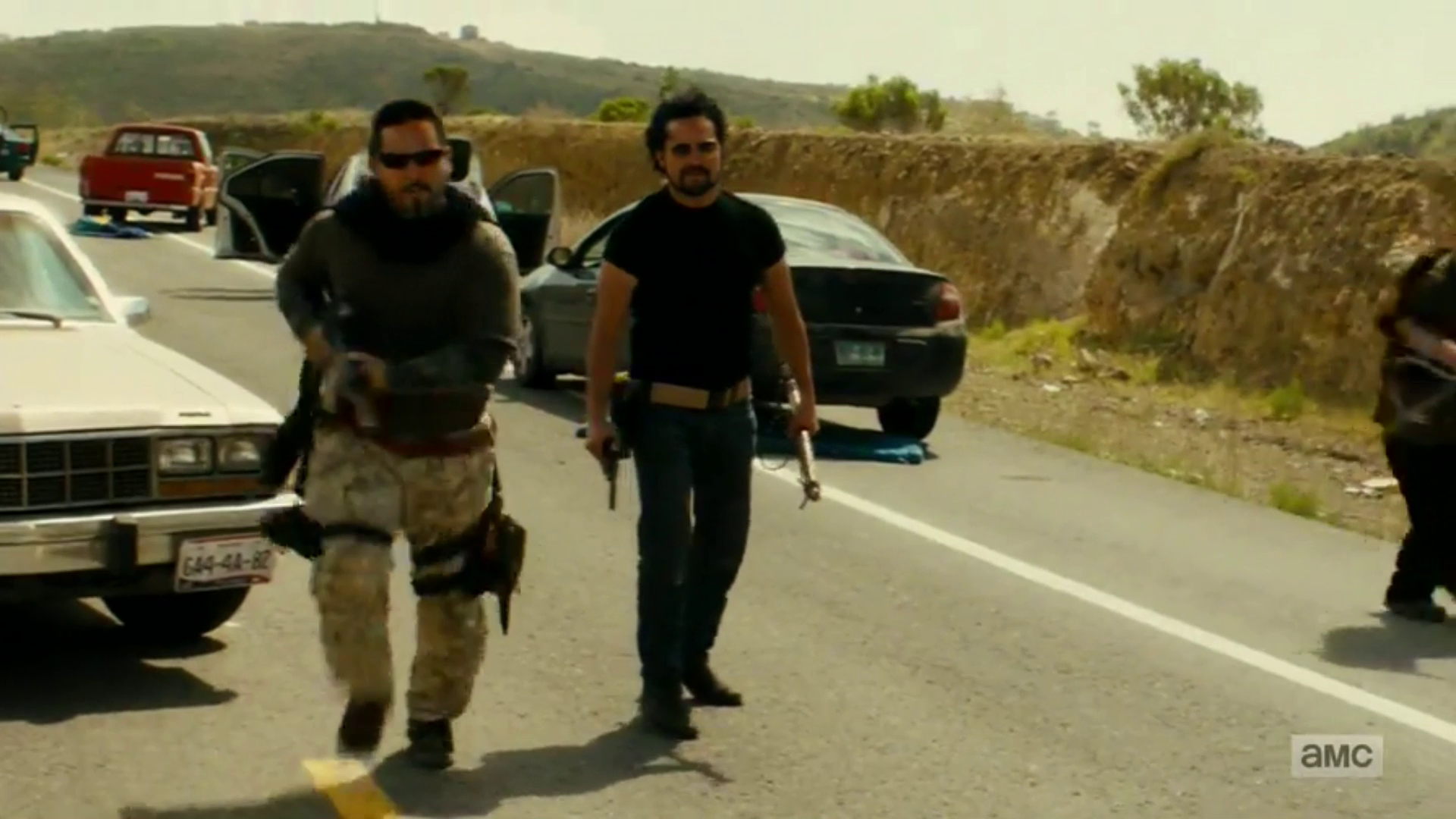 Into the frame drives three men from La Maña, a gang of ruthless roughs Nick was warned about earlier. He hides behind a car as the guys creep closer, scavenging for loot and shooting zombies for fun. That’s when the radio Nick found crackles to life, and they find his hiding spot. That device has nearly killed him twice now. Nick does get away, but he’s far away from the open road and lost in a barren landscape, with no sign of water. 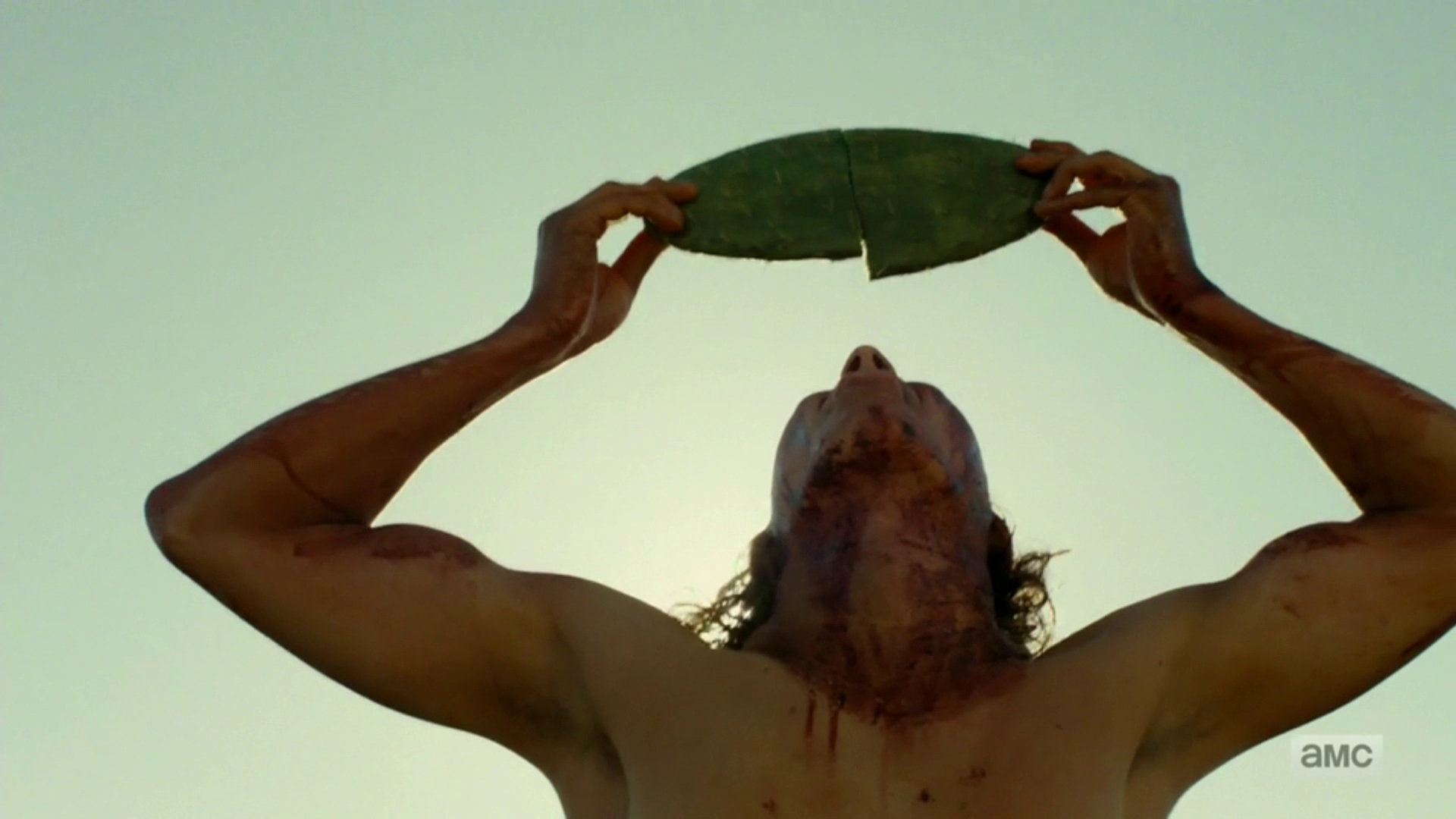 Nick’s really in trouble now. Finding a crop of cacti, he remembers that one survival tip everybody’s heard: there’s water in a cactus. What people don’t know is that there isn’t water in EVERY cactus….Nick finds this out the hard way after spending who knows how long between cuts trying to grasp this needle-barbed plant. He eventually gets the idea of using his shirt to protect himself from the needles…and when he can’t get water to drip out of the broken cactus, he eats it instead.

This is another thing most people don’t know: some species of cacti will actually induce vomiting if swallowed. Nick finds that out the hard way again. And this is when he attempts the pee-drinking thing. 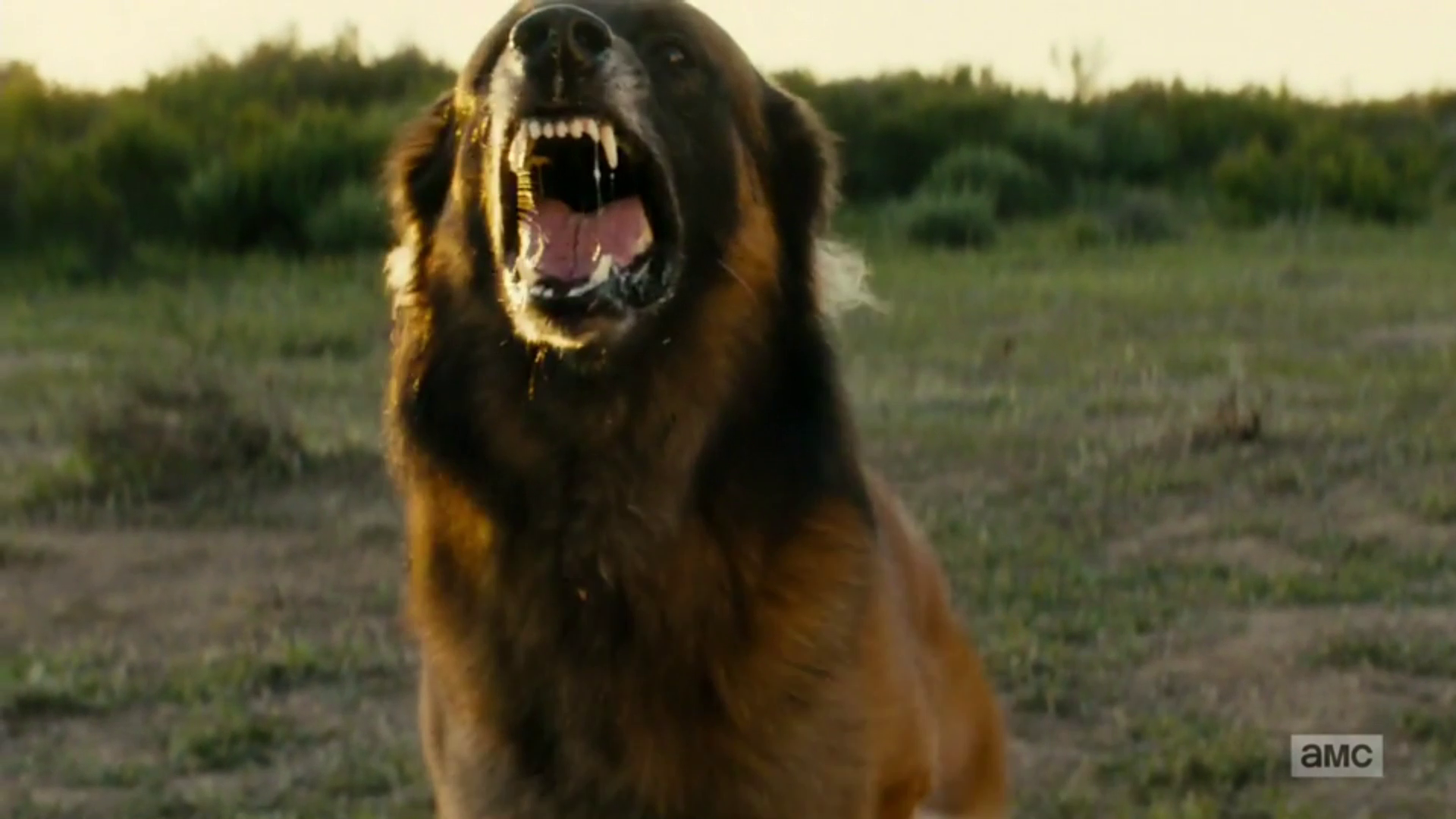 Eventually Nick just can’t walk any further, and collapses next to an abandoned car. Then, as if on cue, Mother Nature produces two wild ravenous Rottweilers to eat him alive. It’s almost like this whole plan to survive on your own in a harsh untamed ecosystem, compounded by the effects of the apocalypse, was a bad idea or something.

Nick is able to climb on top of the car, but not before one of the dogs cripples his leg. And THEN a herd of Walkers begins approaching, lured by the noise the dogs are making. For the first time ever, Nick starts thinking “……it actually IS possible for me to die, isn’t it?” As he buries his head to pray for mercy, the two immediate problems take care of themselves when the dogs decide they’d rather eat the zombies instead. The dogs get their chew toys and then the zombies get their meal.

Why Nick doesn’t attempt an escape at this point is unclear (maybe he’s just too exhausted, maybe it’s another Crazy Nick thing) but eventually they pick all the meat off the dogs and then a loud noise alerts them to the fact that Nick is still there. So they start approaching him again, but the loud noises continue, and they turn around and follow them. 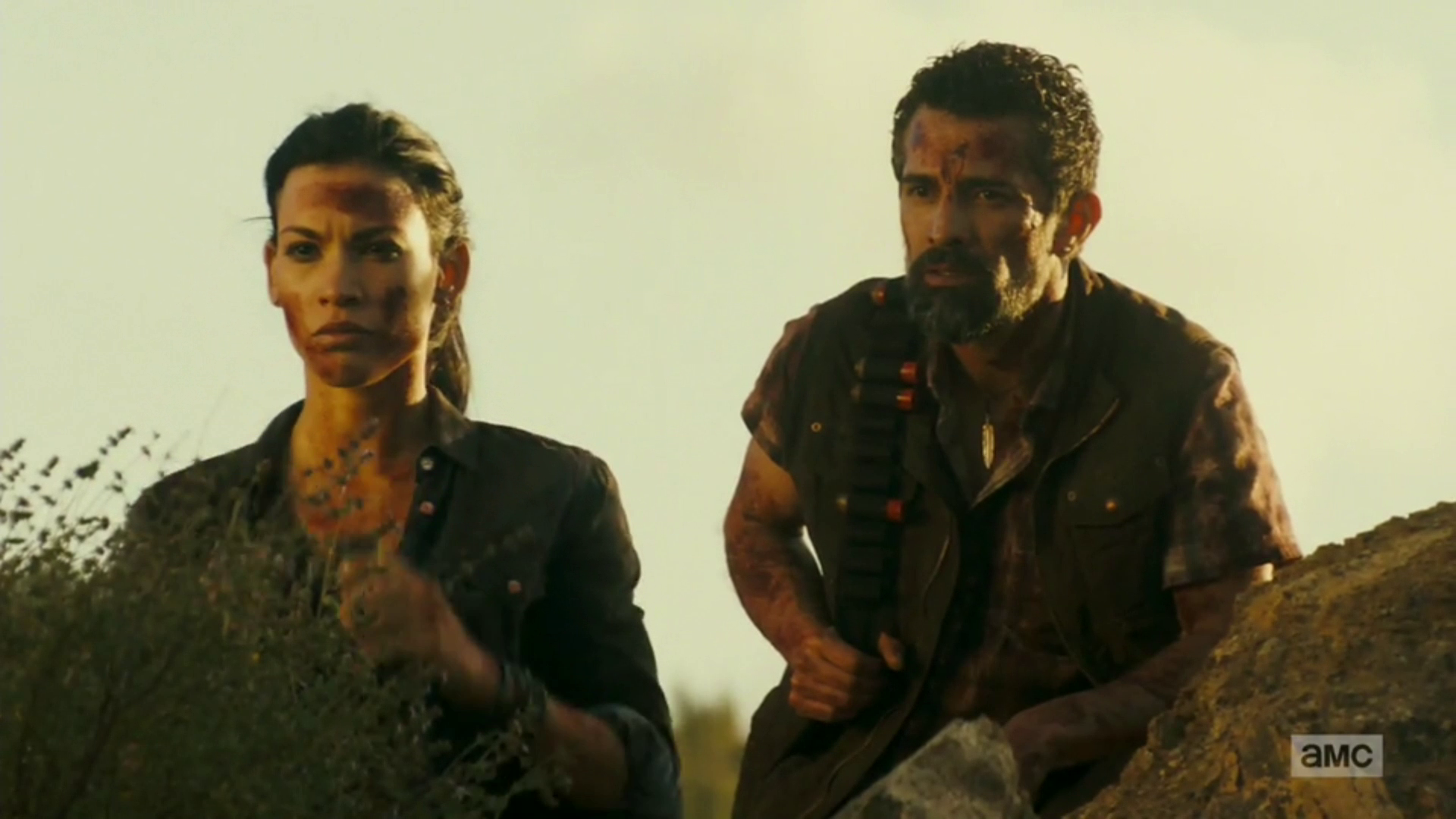 It’s never revealed who was making the noises, but it’s believed to be Season 2B’s new star character, Luciana, and her posse of folllowers. She runs into Nick again later when he’s passed out in the middle of the road, considers saving his life, but then thinks “naaaaa.” 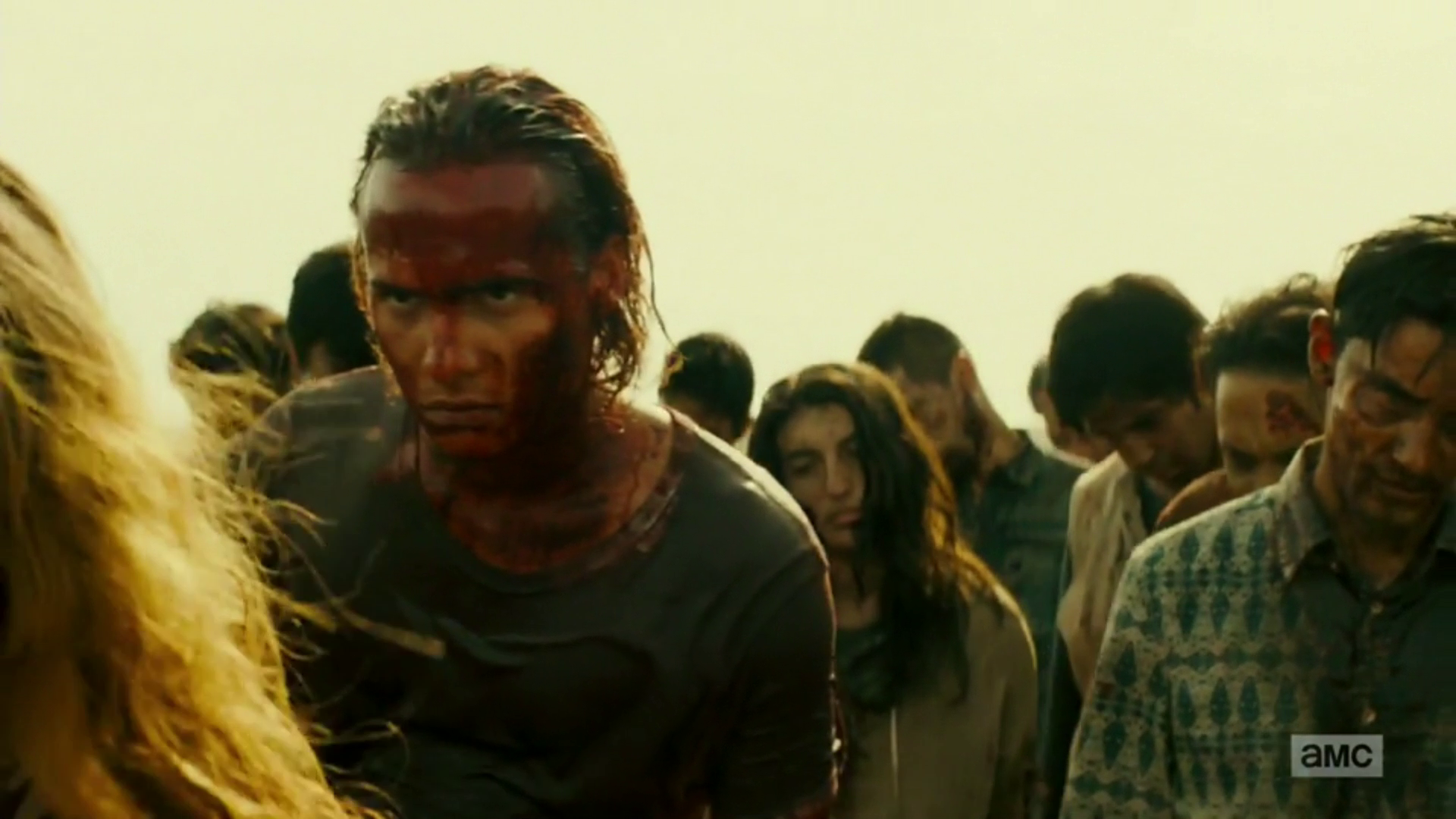 There’s a scene a bit earlier that proves after all this, Nick STILL believes he’s invincible. After the zombies began following the noises, Nick joined the herd. He didn’t even have to paint himself with guts this time, since he smelled terrible already. The herd runs into the guys from La Maña again, but this time Nick is able to get revenge with his new “friends” by slowly walking toward them until one is devoured. It’s hard to tell who’s the dumber one here. The bad guy is constantly picking off zombies and could kill Nick at any time, but Nick doesn’t even flinch; he continues his shamble. Meanwhile, it’s obvious said bad guy can’t possibly shoot all of them by the time they get there, so why is he not running? I have no idea, but this could only result in death for one of them. 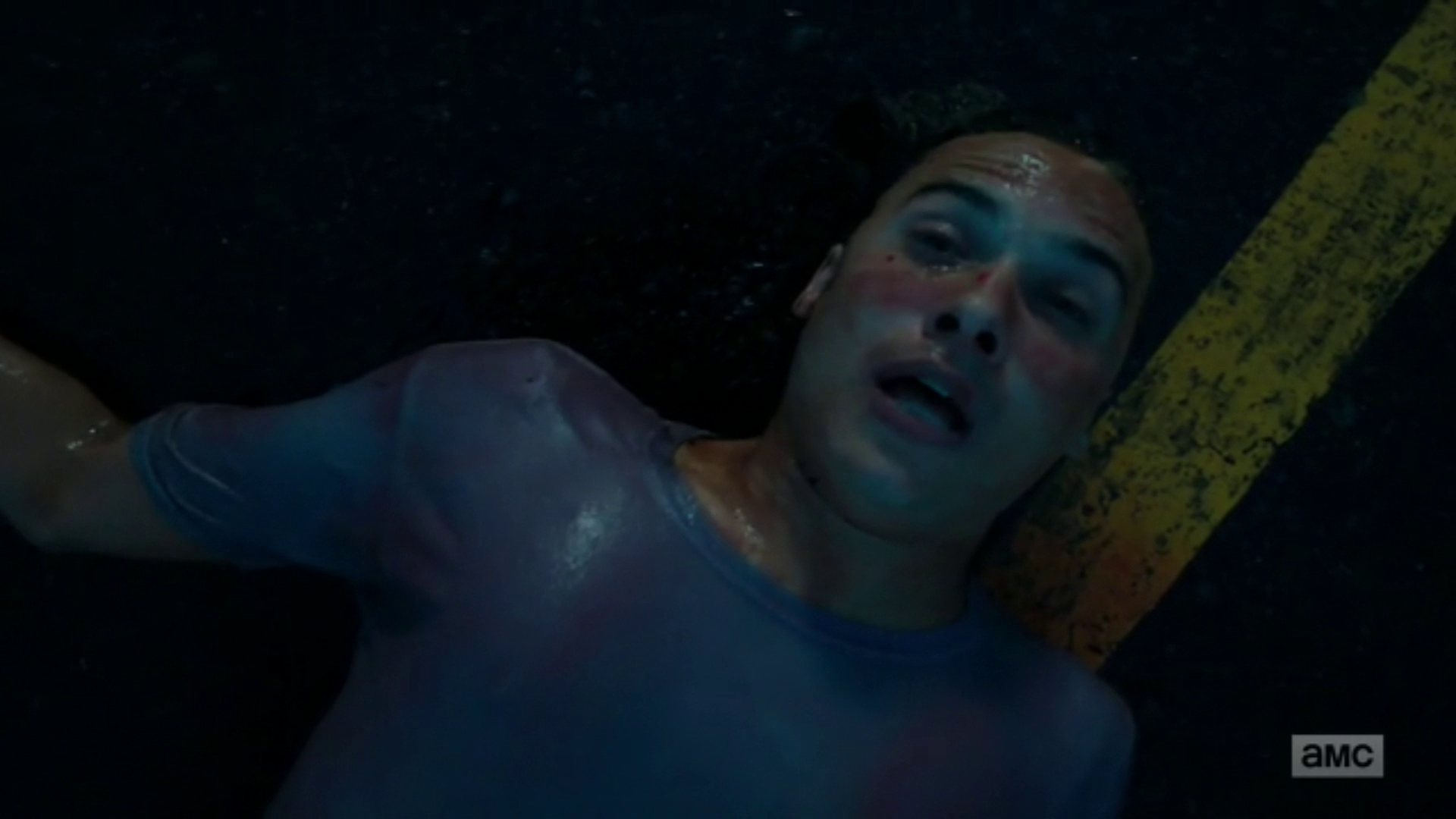 The fates decide to be nice to Nick JUST ONCE and provide a rainstorm, which Nick is all too happy to drink up. The next time we see him, he’s actually made it to Tijuana, and lights up once he sees a sign. Not “WATER,” not “FOOD,” but “DRUGS.” Crazy Nick, don’t ever change.

It’s here that he meets Luciana, who has the reaction “Oh look, you’re not dead, that’s nice.” She gives Nick a little water and directs him to a doctor, who patches up his wounds and opens the door to reveal…. 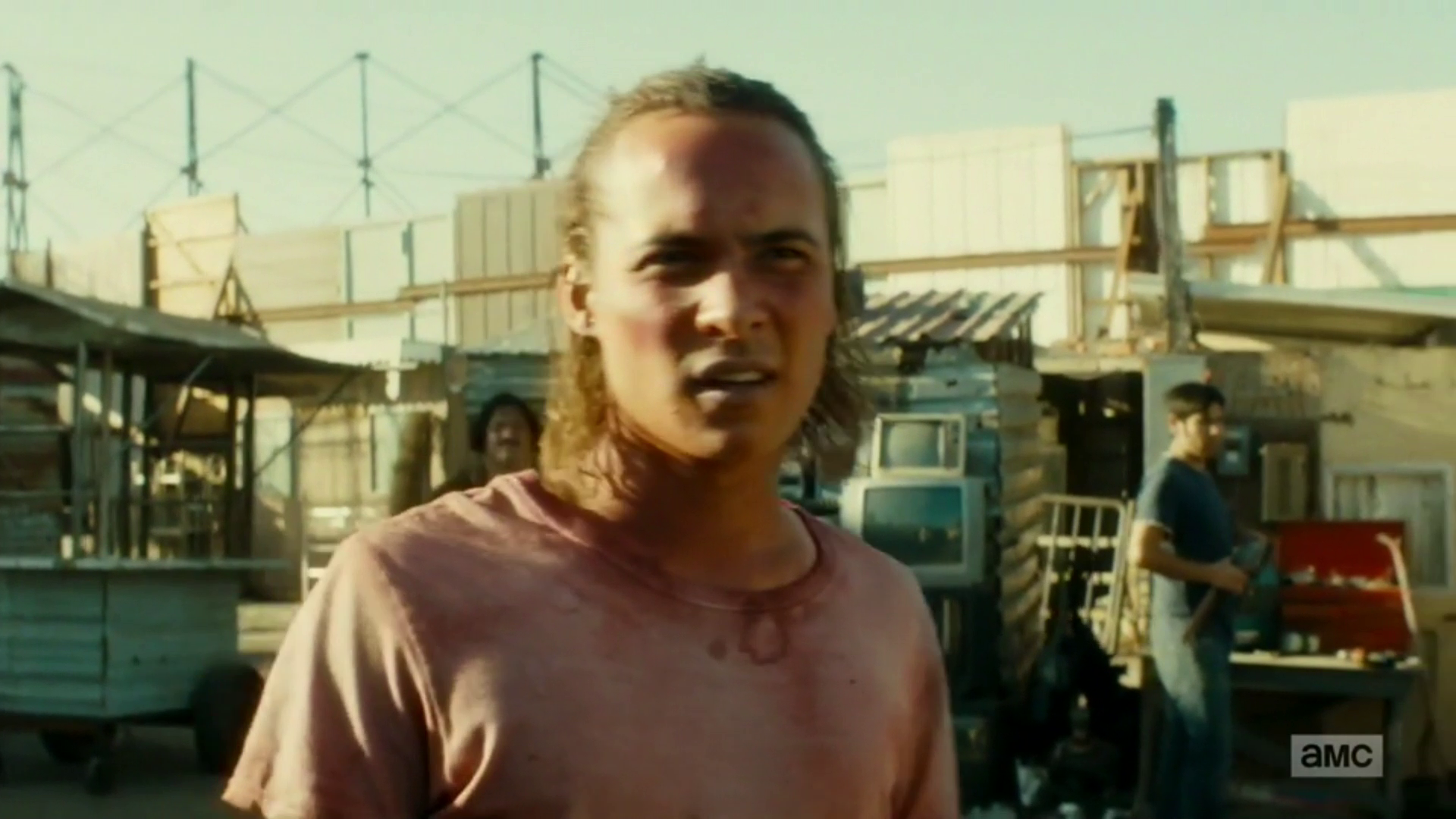 …a bright, vibrant, happy villa, 75% happier and brighter than Alexandria! He made it! Is Crazy Nick finally safe at last? Dave Erickson has already confirmed that “no, he’s not.”

Let’s face it…..even without some kind of Governor or Negan figure waiting in the wings, Nick could easily screw up this twist of good fortune on his own. But in the end, “Grotesque” has accomplished what I thought this show would never do….get me interested in what happens next to Crazy Nick.