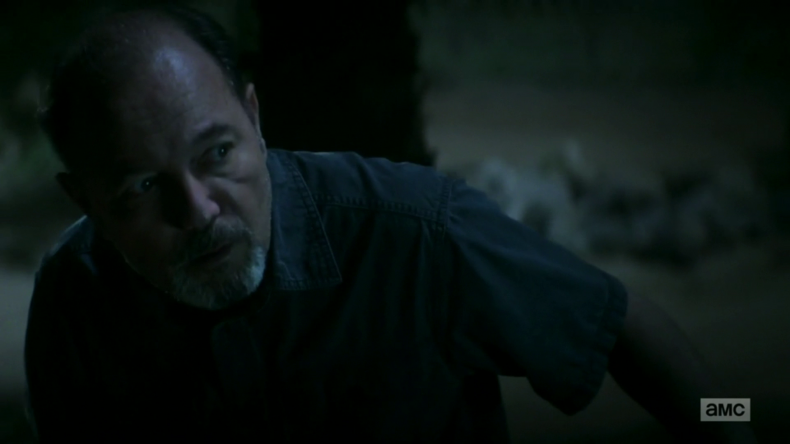 Mr. Salazar is having a traumatic flashback to his childhood in the wilds of Cambodia or Vietnam or wherever at the height of conflict. Fortunately, he’s not actually eight and it’s not still 1971. His daughter Ofelia assures him everything is fine, while….slowly peeling the flesh off her face!! — and Salazar wakes up AGAIN. It was a dream within a dream!

Salazar seems to be losing it over the stress of his situation and the loss of his wife. He won’t be alone in this for long, however. Half of the cast will be Certified Cuckoo by the end of the episode. First Salazar, then Chris, who runs away from the family after the “Chris is too timid and moral to kill, unless it’s his own mother and sister while they’re sleeping” incident. 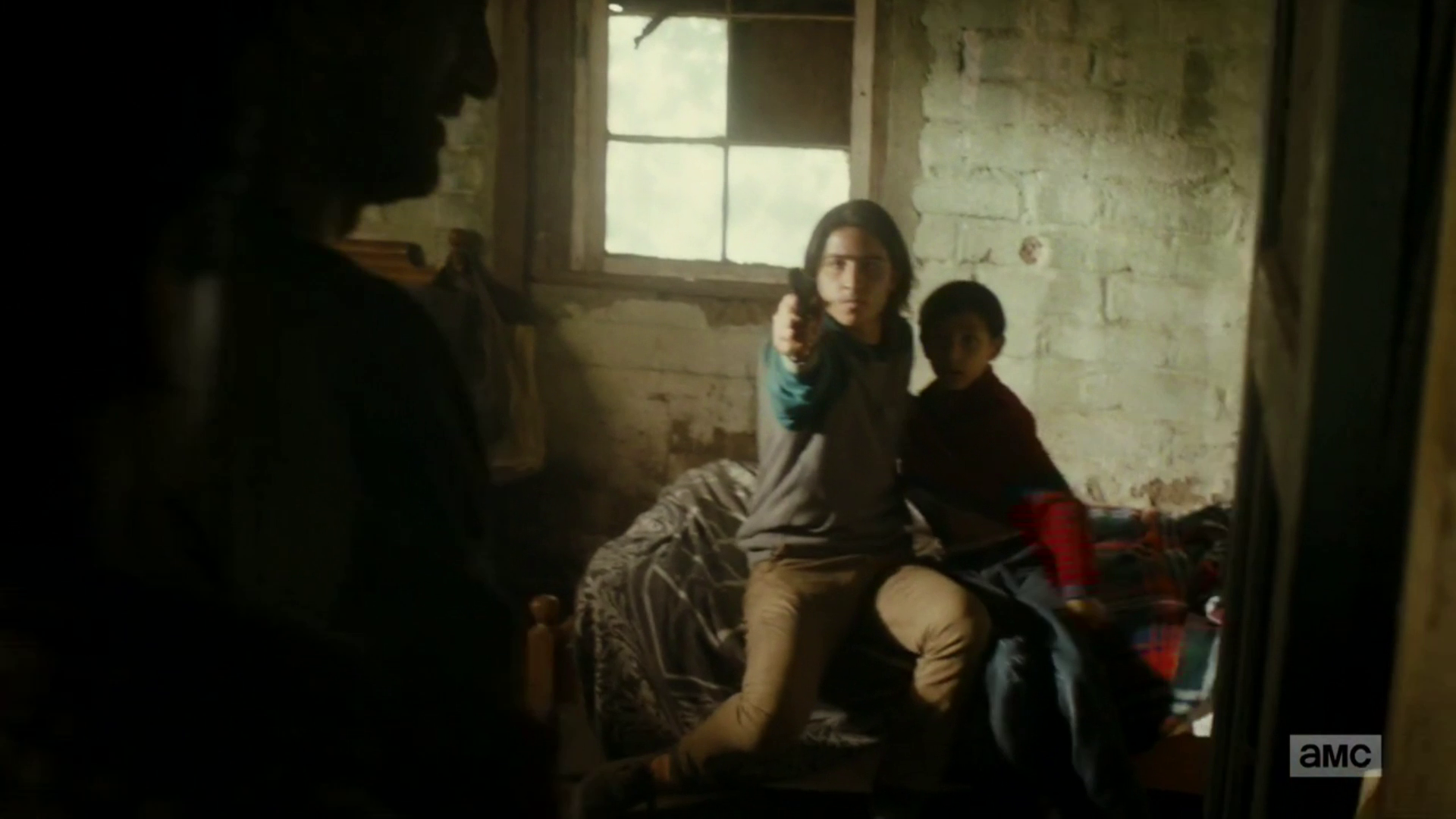 Travis leaves the estate to track Chris down, but both of them will not be back before the episode ends. You might think without any clues, visual tracks, or eyewitnesses Chris would be difficult to find. But somehow, Travis nails him in the first location he guesses at.

Said location happens to be the humble dwelling of a Speanish-speaking man and his son. Travis holds a conversation with him for a while in his native tongue, but he’s noticed this one door that’s remained suspiciously closed, and a book on the couch that’s in plain English even though no one living here would seemingly be reading it. Travis approaches the door and kicks it down.

Now imagine if Chris wasn’t there — boy, would Travis be embarrassed, and he’d get chased into the sunset. But the gamble paid off — there is his son, pointing a gun in his direction while clutching a hostage. He REALLY doesn’t want to go back.

And Travis really doesn’t want to abandon his son. It’s a difficult decision, but he decides to give up his new family and true love to stay with Chris. To be continued…. 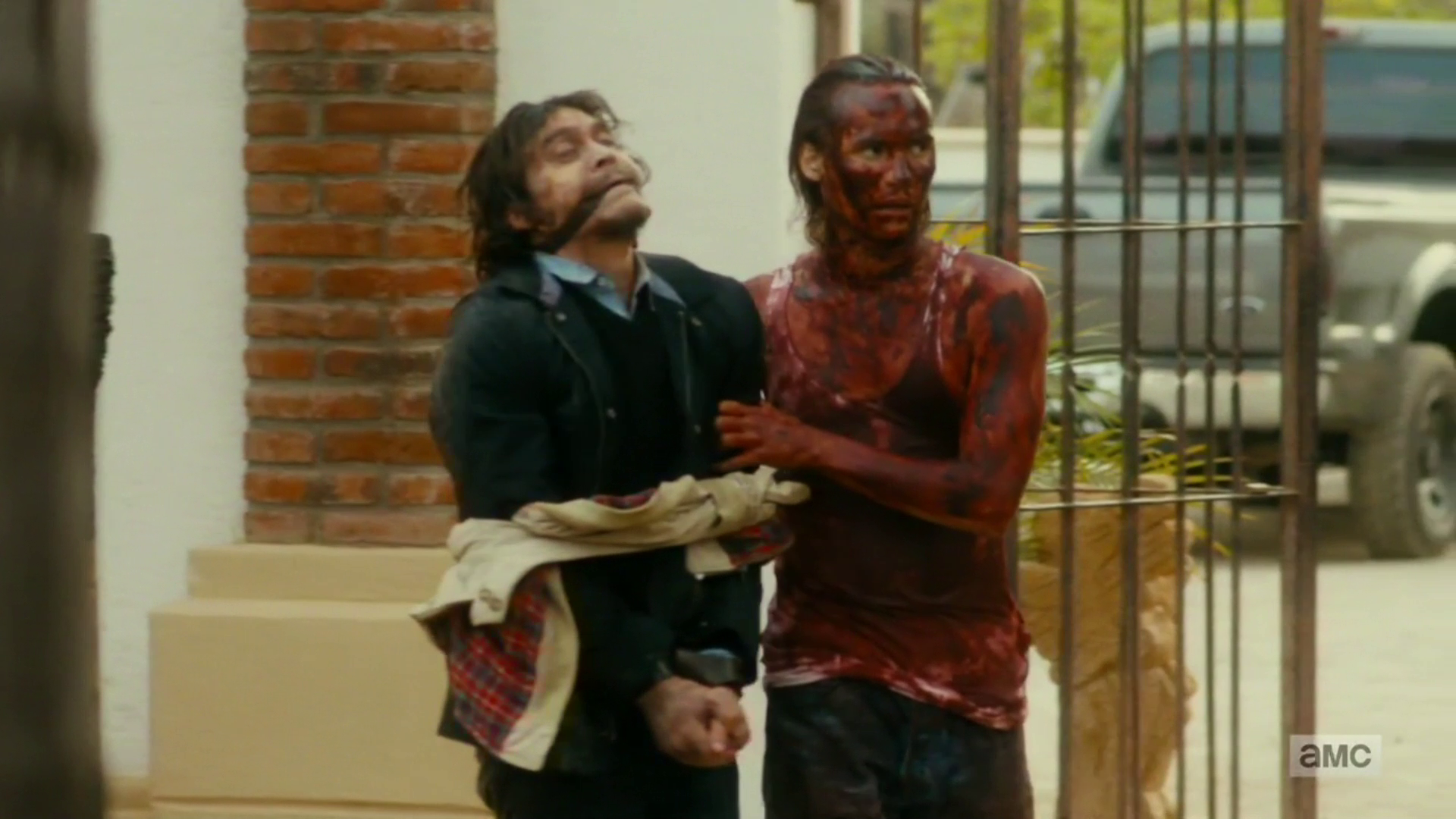 Who else is going crazy? …..Who do you think? It’s our old reliable friend, CRAZY NICK, who has completely embraced the teachings of the Cult of Celia. He’s taken the fact that zombies won’t attack you if you smell like one of them, and interpreted it to mean they must love him. As an offering to appease Celia he runs off and finds the now undead Luis, offering him to her collection as a gift. 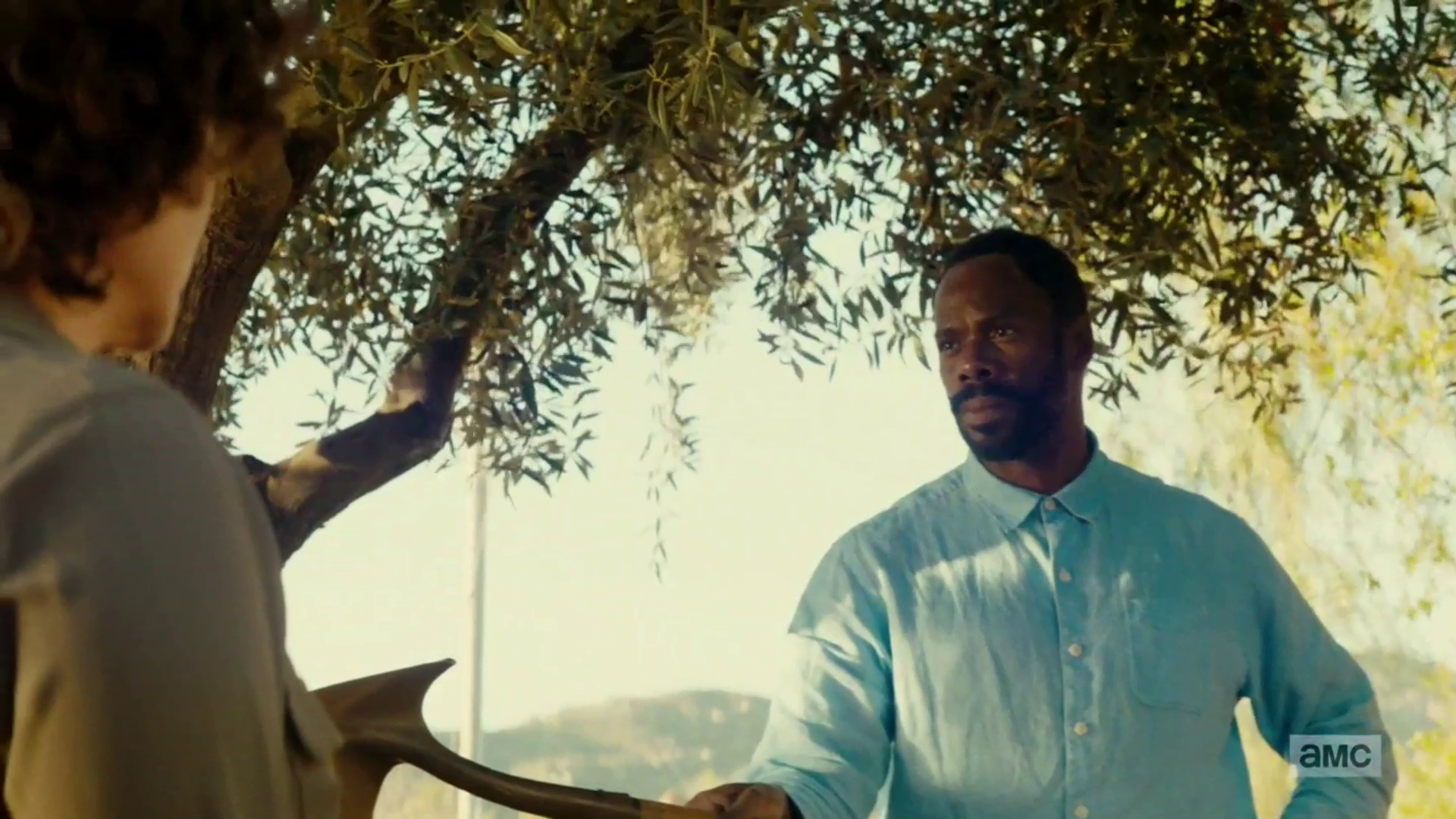 One of the few sane ones is Strand and Celia wants him out immediately. It’s ideological differences — Strand wants to bury his boyfriend, while Celia believes it shouldn’t happen. Also, he shot the guy, so yeah. Strand is ordered to leave the estate by sundown. It was actually a fortunate turn of events he left, though, because then he wouldn’t have found that car by the time the rest of the gang needed it. 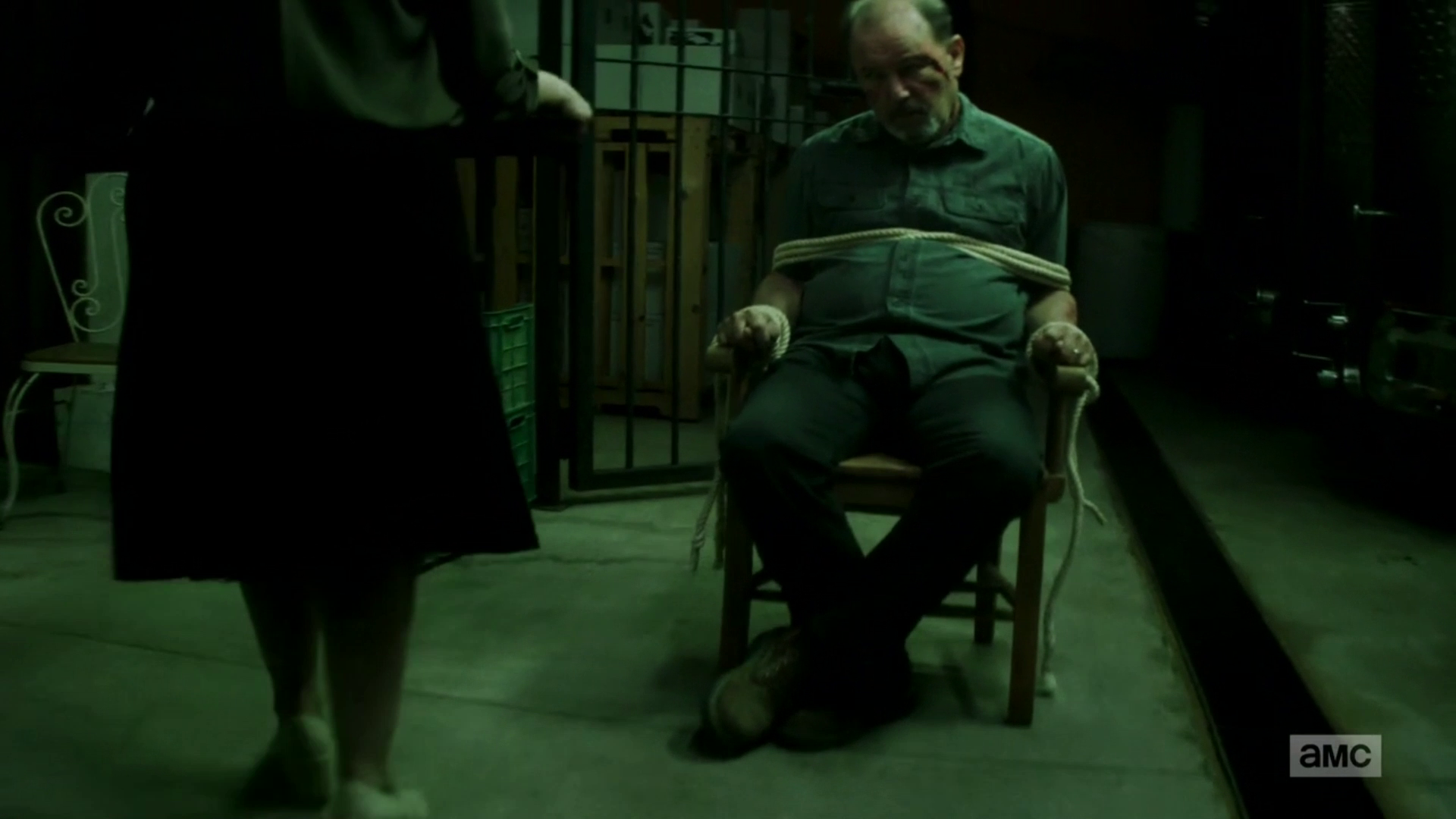 Mr. Salazar hasn’t been seen for a while and Ofelia asks Celia where he is. “Oh, he’s fine,” Celia says, leaving out the part where she had him kidnapped and tied up in her basement, and that other part where she’s been periodically going down there and chastising him for not joining her cult. She believes she can wear him down and break him eventually. She doesn’t know Salazar that well.

Bolstered by encouragement from the voice of his dead wife (yup, crazy), Salazar frees himself from the ropes and escapes. But he’s not done! He’ll be back in a few minutes. 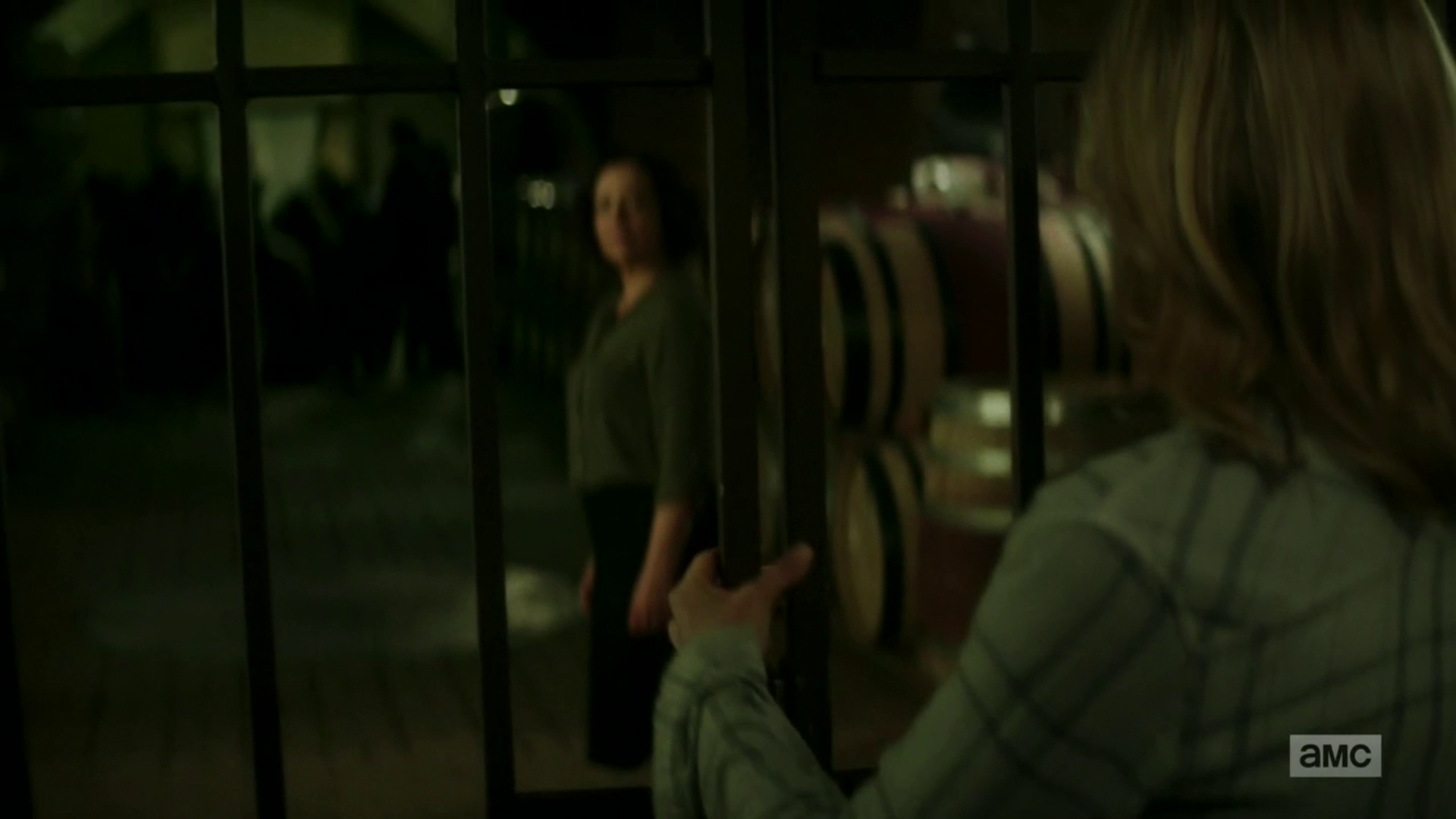 It’s enough time for Celia to return with Madison. Evidently Celia still believes Madison is trustworthy. This was a deadly mistake…after being horrified at the sight of her creation, Madison locks Celia in her own zombie cage. Then after she leaves, Salazar comes back with a can of gasoline and torches the place! But….he doesn’t leave, because he sees a vision of his wife in the shambling crowd. She seems to be suggesting, “Come home to me.” And nobody else is around to convince Salazar otherwise. 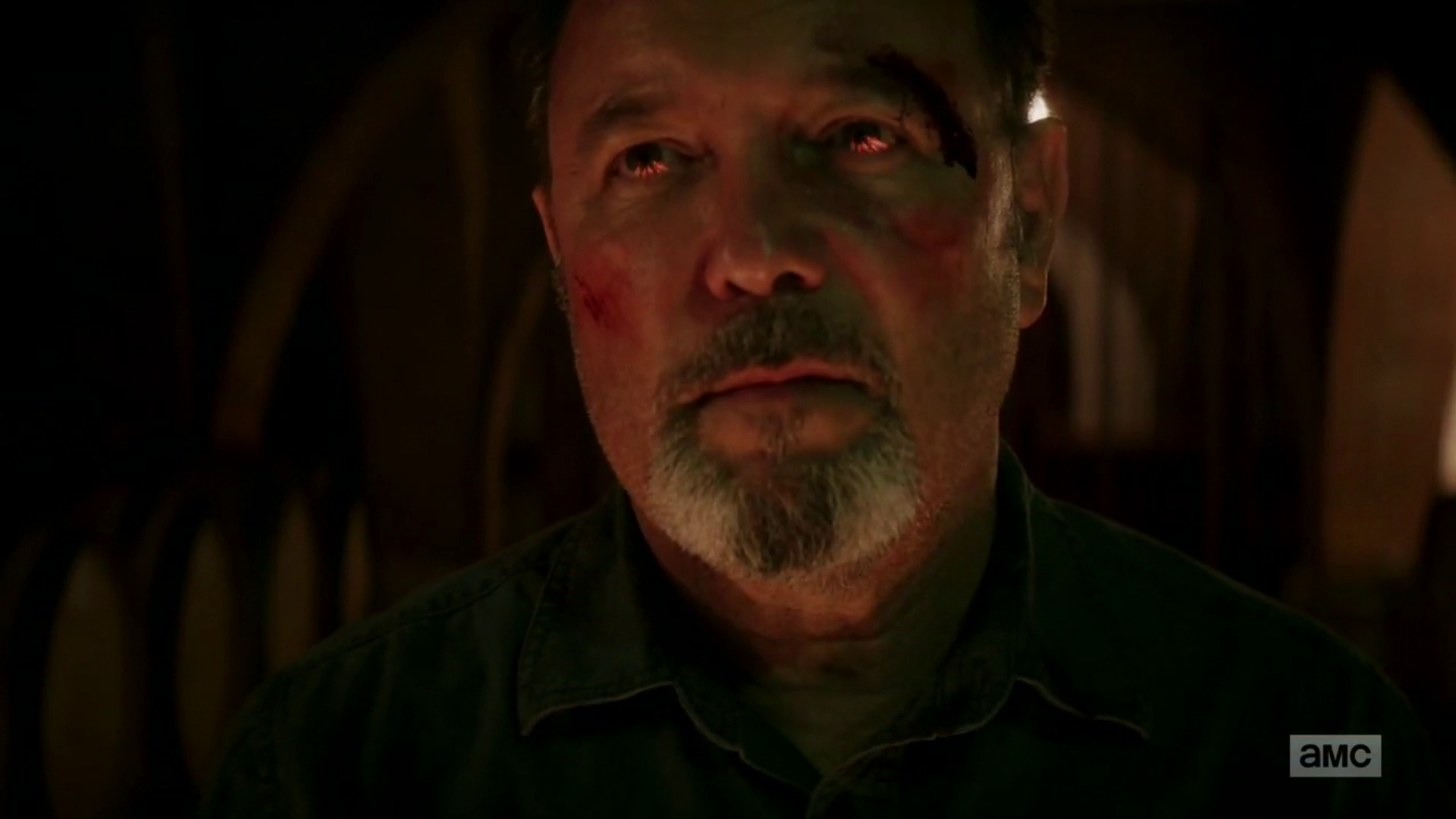 Do you think we’ve seen the last of Mr. Salazar? Since we didn’t see the body, it’s open for debate. The evidence in trope terms, however, doesn’t look good. Salazar had a major piece of his backstory just filled in. He found his courage thanks to his hallucinatory wife (or maybe there are really ghosts in the Kirkmanverse). It felt like they were wrapping up Salazar as a character, and it could be they just WANTED us to think so, but I’m not willing to give the writing staff that kind of layered credit. 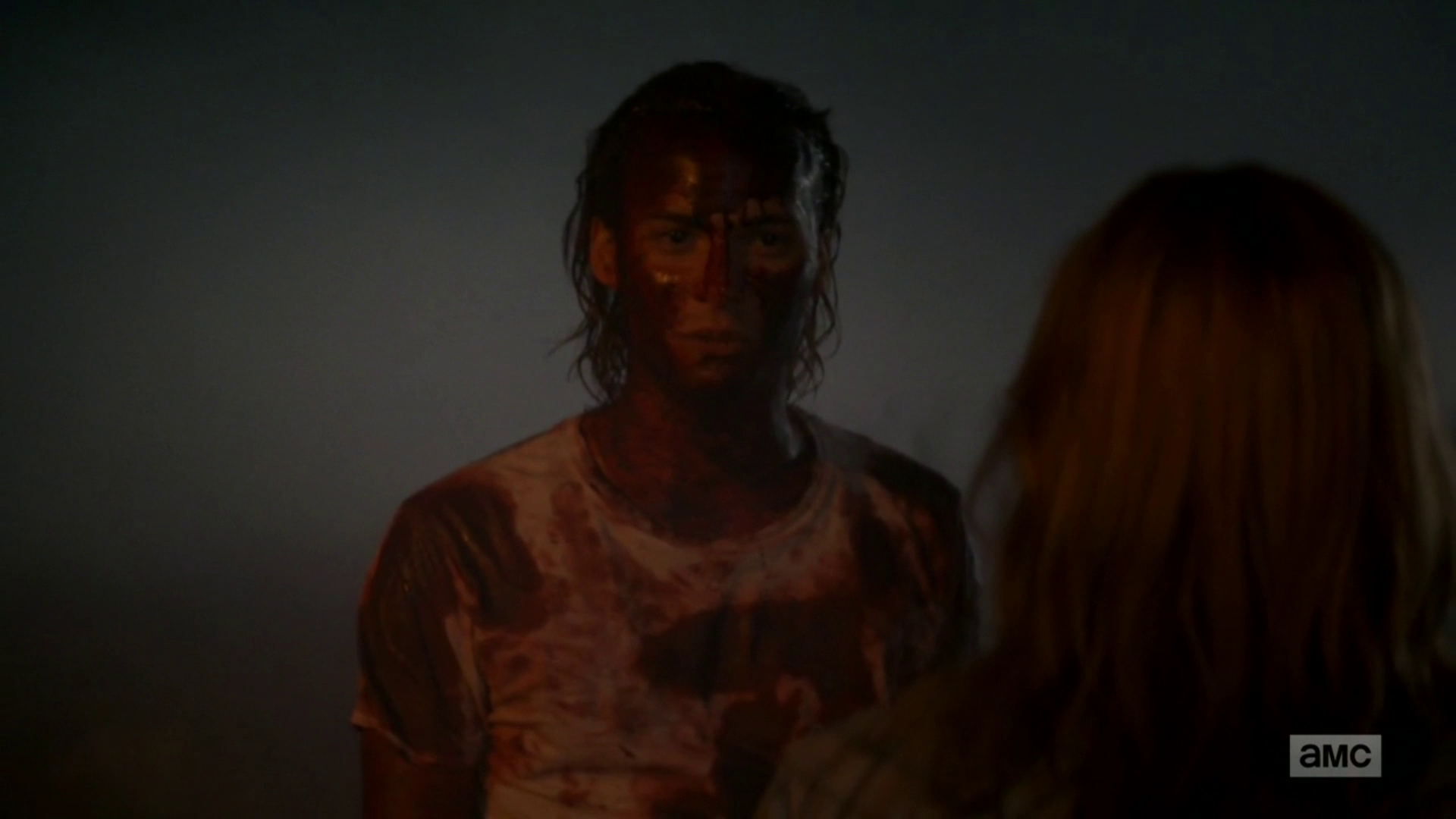 Strand arrives with a car and hollers for what’s left of Team Madison so they can escape this collapsing place. Madison isn’t ready to leave until at least one other family member shows their face. Suddenly, Crazy Nick is seen on the horizon, slowly walking up the road. Madison leaps out of the car and yells for him to get inside.

Nick, however, has a different response. He’s had a revelation. Standing among the shambling living corpses, smelling their nasty odors, just hangin’ around…..these bodies GET him in a way his sister or his parents never did. And so, he’s not coming back. 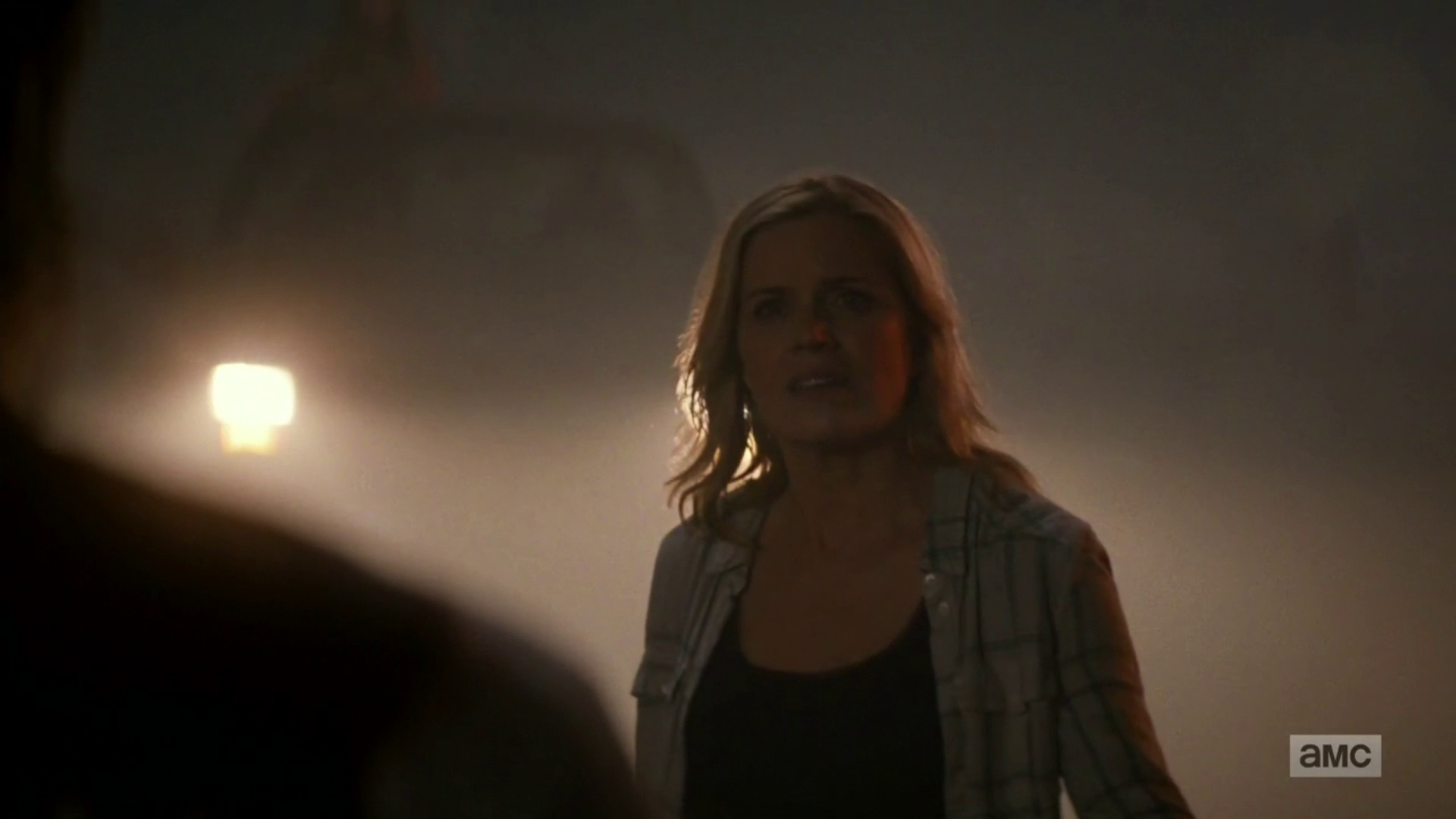 I didn’t buy Chris abandoning his family like this. I do, however, buy Crazy Nick doing it because, well, there’s a reason I’ve never referred to him as “Sane Nick.” Follow your dreams, dude. Chase your passion. Become one with the monsters.

Of course the next time it rains Nick is dead meat, but let him figure that out on his own.

That’s the end of our story until August. I can’t help but wonder how a certain superior character would have handled this situation, had she stuck around. And so, let me introduce a new feature that I’m introducing today….presenting:

HOW ALEX WOULD HAVE HANDLED IT 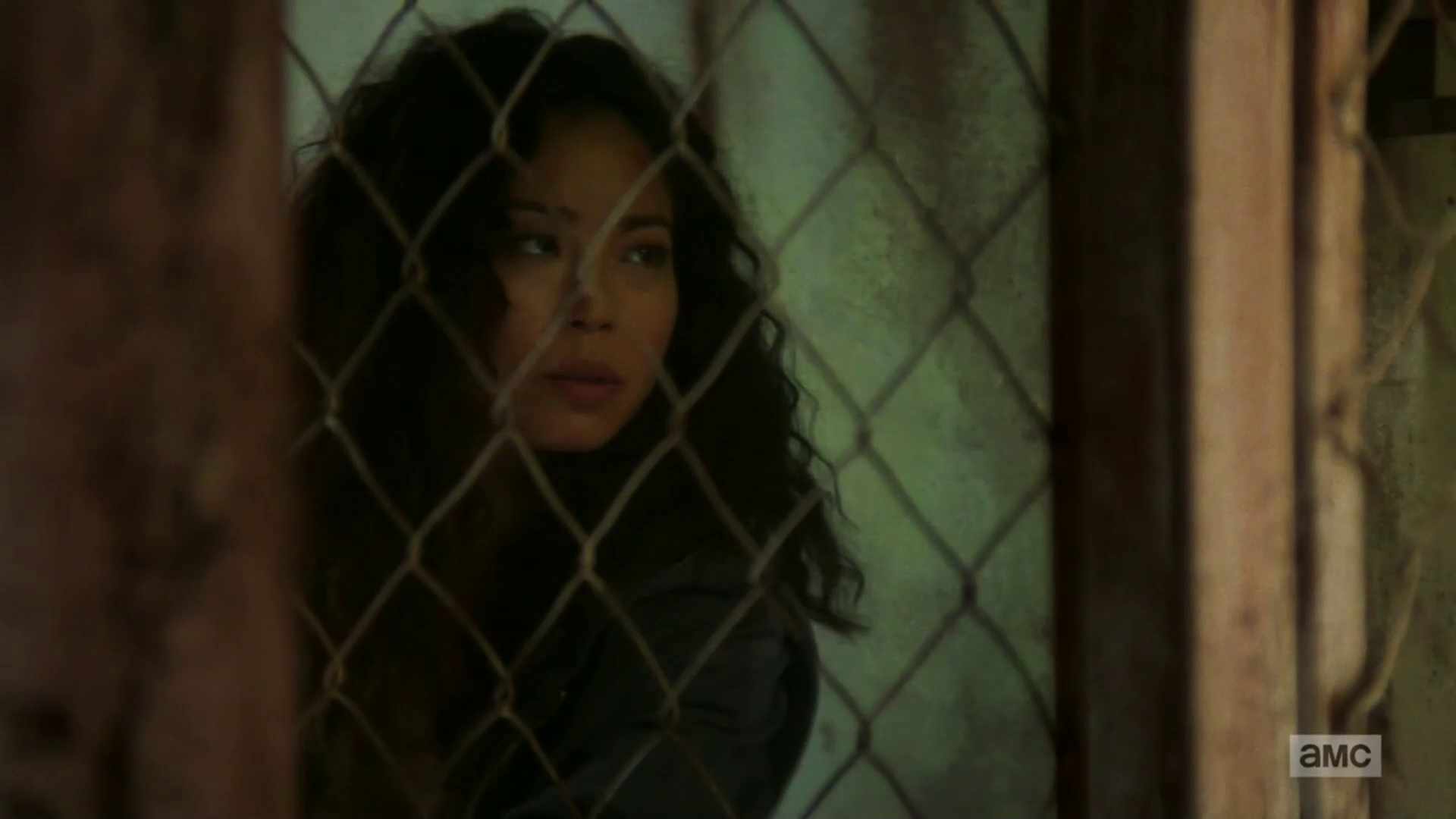 Celia: “Welcome to our casa! Any friend of Thomas is a friend of ours. You are welcome to stay as long as you desire to. Don’t go in the basement.”
*Alex stars at Celia for a few seconds, then immediately sets the place on fire*
Celia: “Ay Dios Mio!”
*Alex roundhouse-kicks Crazy Nick across the yard*
*Alex lassos Chris from fifty feet away and ties him to a tree*
Alex to Alicia: “Stay in school.”