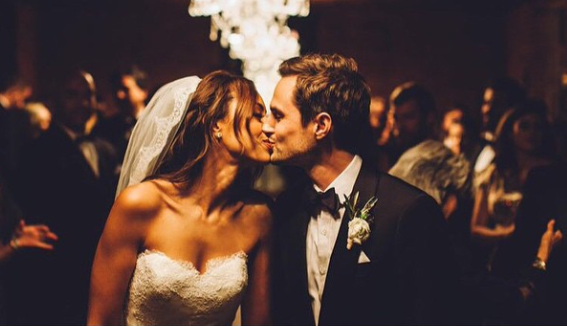 I know there’s a portion of you that complain bitterly that it ruins the show whenever The Walking Dead characters show anything like the emotion which the Earthmen call love, but offscreen is probably okay, right?

Anyway, our favorite dead cannibal, Andrew J. West, best known to you as Gareth, married his longtime girlfriend Amber Stevens on Friday. Amber and Andrew were co-stars, and played boyfriend and girlfriend, on an ABC Family series “Greek,”that I managed to never watch during its 2007 to 2011 run.

The pair got married at Carondelet House, which is an Italian-style villa venue in Los Angeles. According to E!, the bride wore a white, strapless, lace ball gown with a full, three-tier, ruffled skirt and fingertip-length veil with lace trimming. And Andrew wore a tux because that’s pretty much the only option for men.

The cutest scene was when the pair sealed their vows not only with a kiss, but a high five as well. What, no fist bump? We’ve embedded the video below.