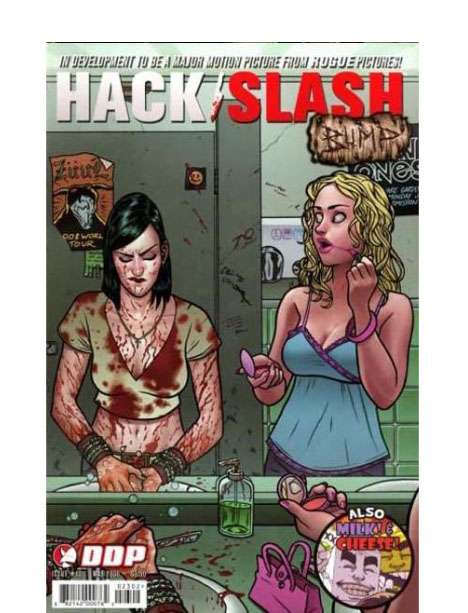 A funny thing happened between the time Hack/Slash put “SLATED TO BE A MAJOR MOTION PICTURE BY ROGUE PICTURES!!!” on the top of every issue it printed and now. Whatever movie was planned at one point got stalled, and eventually fell into the Development Hell that most Hollywood scripts wind up in. The publisher of Hack/Slash was left holding the bag with one of the more infamous sales gimmicks a modern comic book has sported.

Now we’re in a different market. The success of The Walking Dead has cable networks looking for their own graphic novel series to adapt, especially if they’re “grim” or “edgy.” The 90’s and 2000’s had no short supply of those. This caused Relativity Television to bang on Tim Seeley’s door and ask, “You know that Hack/Slash project? Well…..let’s try it again.”

The “Hack” of the series is Cassie Hack, a surly goth girl who lives in the world of slasher movies — where creepers with hockey masks and machetes lurk behind every bush and horrible monsters stalk every teen who dares to have sex. Cassie is the ultimate Final Girl, having survived her first encounter and determined to wipe out all others with her trusty bat. Deconstructing slashers is becoming a cliche of its own by this point, but I would much rather watch this than Scream Queens.

Hack/Slash is currently SLATED TO BE A MAJOR TELEVISION SERIES BY RELATIVITY MEDIA!!!!! The comic is done now, but if it’s ever brought back, they have a new tagline.