How Many Words For “Zombie” Are There In The Walking Dead World? 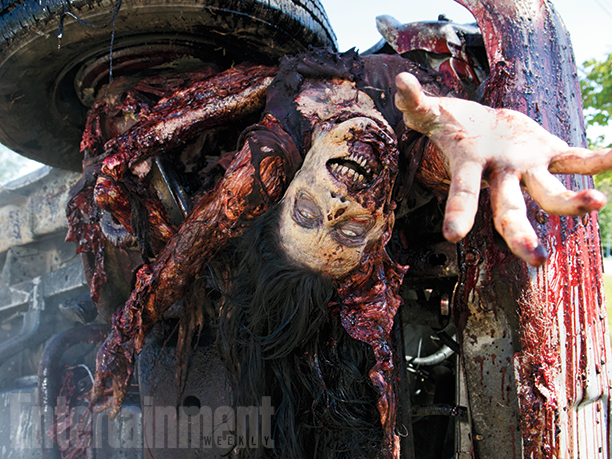 Most zombie stories out there operate under the assumption that the notion of the dead rising did not exist prior to it happening. There are no zombie movies, TV shows or comic books, because then people would have an idea of what to do before it happened. In the world of The Walking Dead, they take this further by having the word “zombie” simply not exist. Instead, people have different terms for the undead depending on the region and community.

How many of these terms have we heard by now? The website Mental Floss did a tally, and counted 13. However, the Walking Dead Wikia lists more. iO9 compiled its own favorites list. We need one too or we’ll get left behind.

WALKERS: The one we’re most familiar with. The most common term used on the show because it’s used by Team Rick.

INFECTED: The most common term on Fear The Walking Dead, put into use by Madison.

DEAD ONES: Abraham and company introduced this one to us, and it sounds like something Abraham would have come up with.

SWIMMERS: Used by Dale to describe a floater zombie in Season 2. The common fan term for a water zombie is a “floater,” but no one in the series has called it this yet.

BITERS: The term for zombies in the Governor’s community.

GEEKS: Very occasionally you’ll hear this one, sometimes out of Daryl. “Geek” means “nerd” now, but it used to mean “circus sideshow performer who eats nasty things for a living.” Perhaps the term never changed in TWD.

CREEPERS: Only used by Merle, and now that Merle’s gone, no one uses this.

COLD BODIES: What the residents of Terminus called them. There’s even less imagination here than with “Infected.”

MONSTERS: You would think this one would be more common, but it hasn’t been used very often.

ROAMERS/HERDS: A pack of zombies are referred to as roamers in the series, and as herds in the comic (sometimes hordes).

EMPTIES: This peculiar one was used in the comic by Paul as he was rescued from two zombies trying to break into the car he’d been sleeping in.

WASTED: The most recent term, uttered by the dude-bro gang from last Sunday’s FTWD episode.