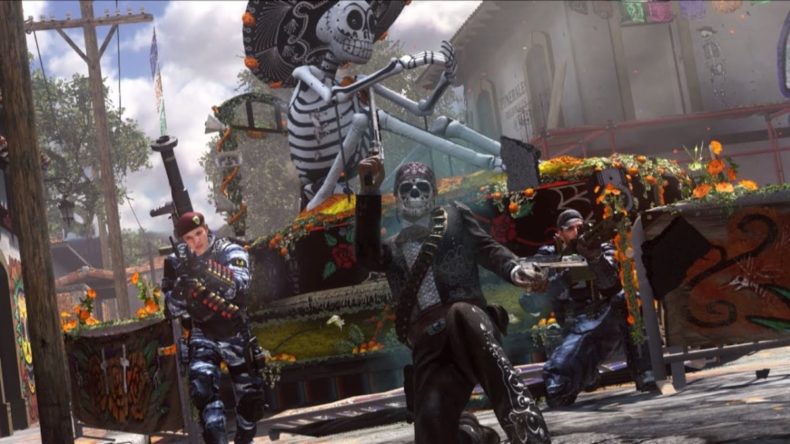 Activision has announced that Invasion, the third of four planned DLC packs for Call of Duty: Ghosts, is coming July 3 to PS3, PS4, and PC. The DLC has been out on Xbox 360 and Xbox One since June 3.
The new pack adds a great deal of colorful content, with a heavy fantasy focus.
The new Dia de Los Muertos themed level “Departed” features an interesting “Death Mariachi” mechanic in which players can become the Death Mariachi and make others join their infernal band.
“Pharoah” features an Egyptian palace and flesh-eating scarabs. “Mutiny” is a Caribbean pirate hideout featuring a pirate ship and the previously-mentioned pirate ghosts. And “Favela” is “Favela” from Modern Warfare 2, with a few architectural changes to shake things up.
Invasion also includes “Episode 3: Awakening,” the third of four parts of the game’s episodic alien-blasting storyline “Extinction.”
The DLC will come to other platforms later. It costs $14.99, but can also be purchased as part of a $49.99 season pass that includes all four planned DLC packs.