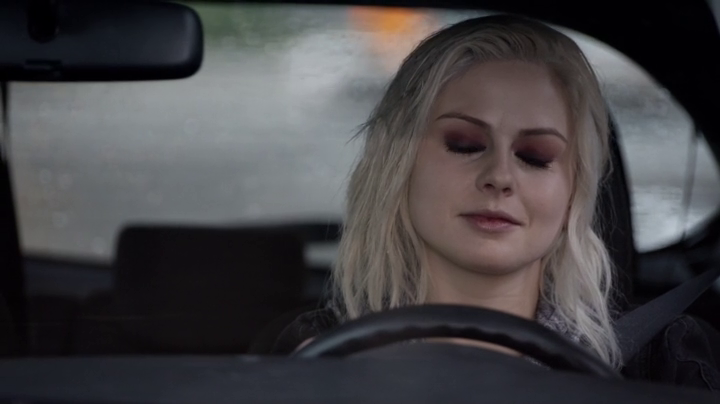 Earlier in the year, The Last Man On Earth premiered on Fox and the producers promised us “a twist in every episode.” These twists turned out to be things like “Phil shaves his beard” or “Phil finds a cow.” Fortunately, iZombie arrived a bit later to show us all how one-per-episode twists are done. I hope they’re taking notes. 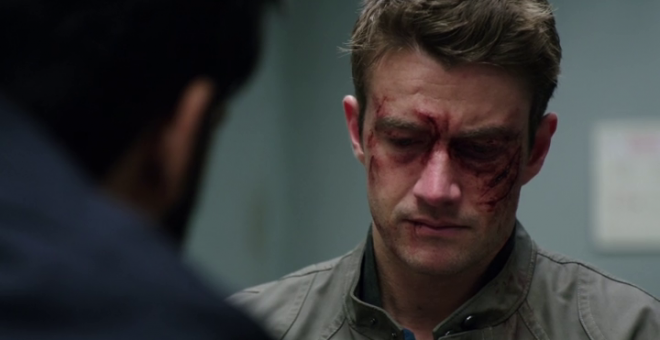 Not only did Major get arrested last episode, but in the time period between then and now, he was roughed up pretty severely in there. Liv’s work friend Ravi and her roommate Peyton busted him out, and were shocked at his appearance. Ravi tells Major they found Jerome and Eddie’s bodies, and the culprits have been ID’d as the crazy cultist couple from last week (who Chief personally killed when they were alone). Major knows that’s not true, and is more determined than ever to get to the bottom of this.

Liv is doing morgue stuff, while listening to her favorite radio love-advice show, when some very irate person calls in declaring she’s going to kill her husband’s mistress. Wonder who that could be? It doesn’t take long for one good clue to present itself: the radio host, Sasha, is immediately electrocuted from a purposely-placed wire tied to the station’s backup generator. 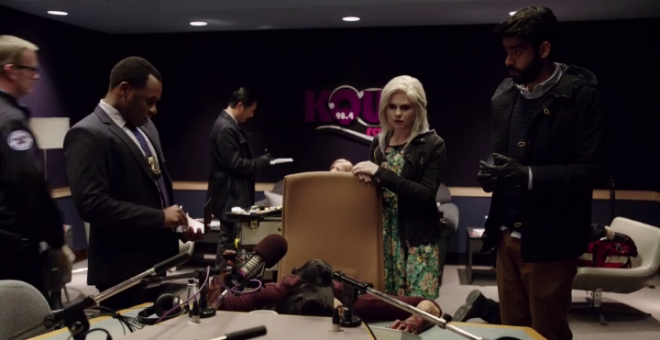 It must’ve been the caller, but who could that have been? What might narrow things down is the fact that since the kill involved in-studio resources, the culprit might either work there or know someone who does. We also know that Sasha was the “mistress,” so it also had to be the spouse of someone she was involved with. That would ordinarily narrow things down to one or two people, but not in Sasha’s case; she played the field pretty widely.

Liv gets a vision that reveals she had bedded Chuck, a misogynistic shock jock who worked for a rival station. She also got another vision that showed his wife furious and throwing a drink at Sasha during some party. Well, it couldn’t be THIS simple THIS early, and it wasn’t: Chuck revealed his bride was mail-order and barely spoke English. She couldn’t have been the caller. 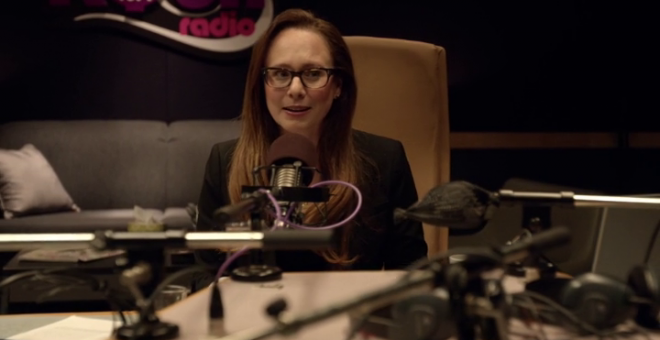 A third vision showed Sasha’s assistant, Jane, had a less-than-idyllic relationship with her. Was that enough to push her to murder? After visiting with her, they conclude “no.” Then while listening to MP3s of Sasha’s past shows, Liv stumbles on a commercial that’s narrated by the same voice as the caller’s. When she travels to that person’s house, she discovers someone she saw in a previous vision is her boyfriend. Case sol—–oh, wait.

It was actually Jane. She’d been working as Sasha’s assistant too long, Jane felt, and it was high time she was promoted, one way or another. So she got the woman to record the call, then electrocuted Sasha once it ended, implicating someone else and getting her off the hook. Or so she thought, if it weren’t for that meddling zombie! 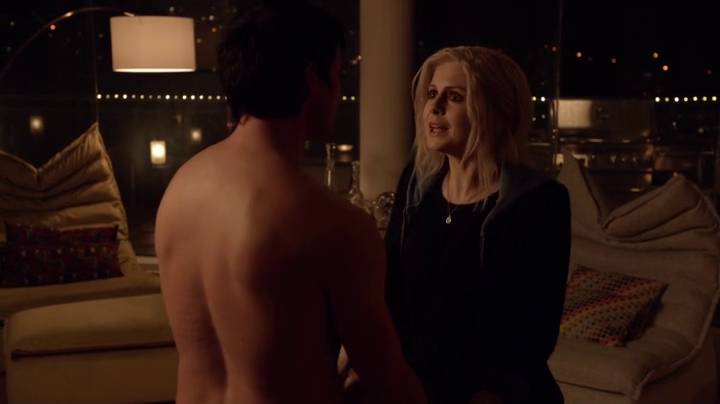 Sasha’s brain gave Liv a new gift of psychoanalysis, which also caused her to reexamine her relationship with Lowell, if only for a couple minutes. “Think about it,” she says to him. “We have nothing in common except for the fact that we’re zombies.” This I do not understand, because Liv seems to have even LESS in common with Major and yet the show protrays him as her Perfect Mate Who Got Away. At any rate, I know better from past TV experiences than to get attached to Lowell, since he smells of “season finale tragic killing.” 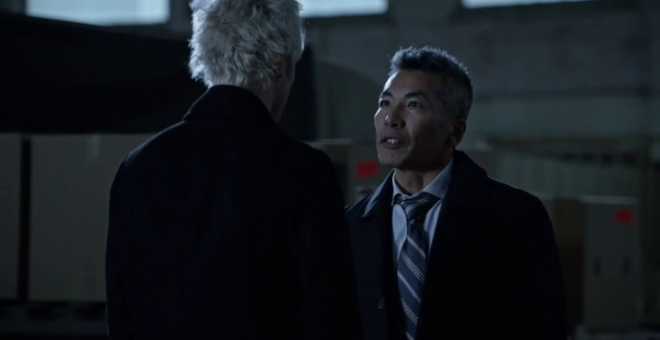 We got a hint of this in an earlier episode, when the police chief was revealed to be a zombie…but now we have confirmation; he is one of the people under Blaine’s thumb, forced to do his bidding for brains. Is Blaine a mastermind, or what? Everything makes perfect sense now….the cavalier way he goes about breaking the law, the reluctance of the police force to seriously inspect Meat Cute, and why ten billion disappearances haven’t been investigated. And now it is clear just HOW much doo-doo Major is in. He thinks the cops will help him if he stumbles onto the truth, but he’s dead wrong. This could also mean trouble for Clive. And since it takes one to know one, Chief knew the truth about Liv immediately! Things are ramping up, and at a perfect pace. 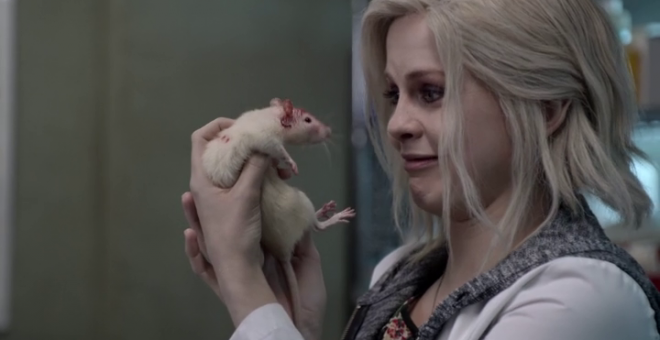 As revealed last episode, Ravi succeeded in creating a zombie rat. Now comes the real test: keeping the rat carefully guarded while testing on him in an effort to cure the zombie virus. Obviously this rat should only be handed by Liv, since she revealed zombified creatures never snack on each other. But Ravi thought he was two steps ahead with his customized Chainmail Gloves, and stabbed himself to prove it. Han Solo would say he has a bad feeling about this.

But even if it was a tad telegraphed, I was still SHOCKED at the fact that Ravi was bitten by the rat shortly before the end credits. This could potentially be a huge game-changer, and is one of those “twists done right” I was referring to earlier. How will he get out of this one? Will he be able to reverse the effects before it’s too late? If he succeeds, what does that mean for Liv? If he fails, will there be enough brains in that morgue to feed two zombies? So many questions! 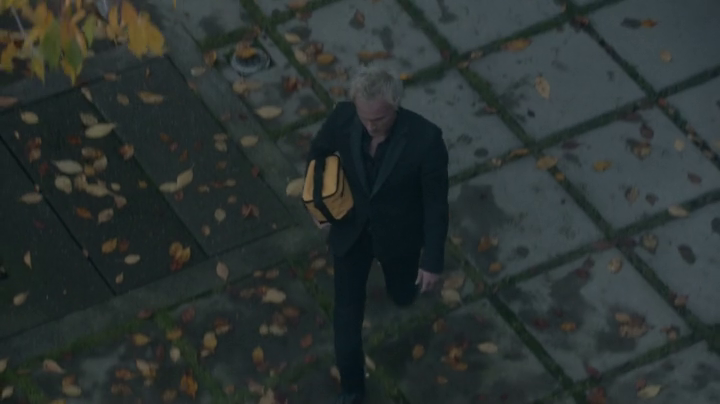 As we close out, the jig is completely up: while riding a glass elevator down, Liv notices Blaine walking toward the building and suddenly has a vision of his killing Jerome (when did she eat Jerome’s brain?) It’s cliffhung at that moment, when she suddenly pieces it all together and Blaine is JUST about to enter the same elevator with her.

I’m expecting ONE of the known zombies in the current cast to bite it (no pun intended) by the end of the season, either from going full-zombie and Liv being forced to kill him, or from being killed outright. The best odds are on Lowell, who feels like a one-season character. If not him, then second in line is Candyman, followed by Police Chief. There’s no way it could possibly be Ravi; that would upset the balance of the workplace scenes too much. And they’d only off Blaine if they were insane.