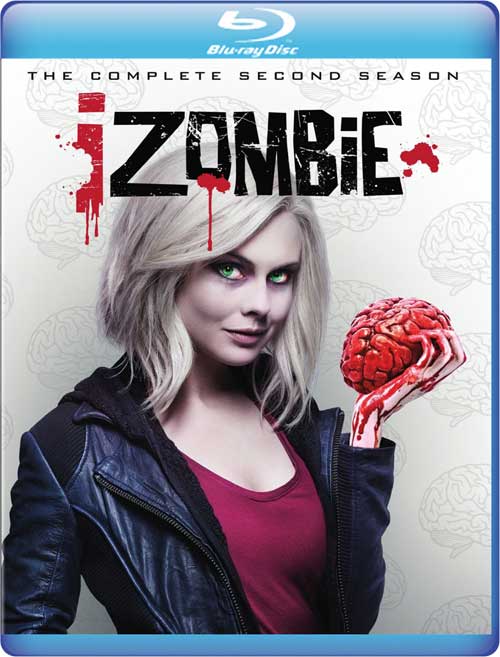 When the first season of iZombie was released on DVD, fans were happy to have it, but they were a bit let down that a Blu-Ray for the season did not exist. Warner Home Video was listening, and today they announced that not only would iZombie Season Two be released on Blu-Ray, but Season One would retroactively be released on the format as well!

You won’t be able to find them in stores though (due to their ever-shrinking DVD shelves). The iZombie Blu-rays will be an online exclusive, available at Amazon.com and other e-tailers. Season Two comes out July 12 on both formats, and so does the Season One Blu-Ray. Liv fanatics, start socking away cash now.

Below lies WB’s press release, which recaps the events of the season and the episode titles.

Additionally, due to overwhelming fan demand, iZOMBIE comes to Blu-ray courtesy of Warner Archive as individual Season 1 and Season 2 offerings. The Blu-ray releases of iZOMBIE will include all bonus features on the DVD versions of Season 1 and Season 2, respectively. Also available on July 12, 2016, the Blu-ray releases will be found at Amazon.com and all online retailers.

Power up with your favorite brain food, and prepare for more fun and thrills! iZOMBIE stars Rose McIver as Olivia “Liv” Moore, a medical resident on the fast track to a perfect life…until she’s turned into a zombie. But Liv finds her calling – and an endless supply of food – working at the Seattle coroner’s office, helping to solve crimes with her “visions,” while her boss and sole confidante, Dr. Ravi Chakrabarti, works on a cure for her unthinkable condition.

As Season Two begins, Liv’s ex-fiancé and love, Major, is reeling from recent events and the knowledge that Liv is a zombie. Meanwhile, Blaine – now human – struggles to maintain his zombie world; Clive searches for Blaine and suspects Major’s involvement in the Meat Cute massacre; and Ravi remains devoted to finding an antidote to the zombie virus. Unlikely alliances will be struck, relationships will be challenged and the line between good and evil will blur for both zombies and the fully living.

“In only its second season on the air, it’s a no-brainer that iZOMBIE continues to be a fan-favorite with its compelling characters and visionary plotlines,” said Rosemary Markson, WBHE Senior Vice President, Television Marketing. “We are delighted to bring iZOMBIE: The Complete Second Season to DVD.”

iZOMBIE is based upon characters created by Chris Roberson and Michael Allred for Vertigo from DC Entertainment. The series was developed for television by Thomas and Ruggiero-Wright, who executive produce along with Danielle Stokdyk (Veronica Mars, Party Down) and Dan Etheridge (Veronica Mars, Party Down). iZOMBIE is produced by Bonanza Productions Inc. in association with Spondoolie Productions and Warner Bros. Television.

About DC Entertainment
DC Entertainment, home to iconic brands DC Comics (Superman, Batman, Green Lantern, Wonder Woman, The Flash, etc.), Vertigo (Sandman, Fables, etc.) and MAD, is the creative division charged with strategically integrating its content across Warner Bros. and Time Warner. DC Entertainment works in concert with many key Warner Bros. divisions to unleash its stories and characters across all media, including but not limited to film, television, consumer products, home entertainment and interactive games. Publishing thousands of comic books, graphic novels and magazines each year, DC Entertainment is one of the largest English-language publishers of comics in the world. iZOMBIE and all related characters and elements are trademarks of and (c)DC Comics.

There Is Already A Date For The Season Six Blu-Ray