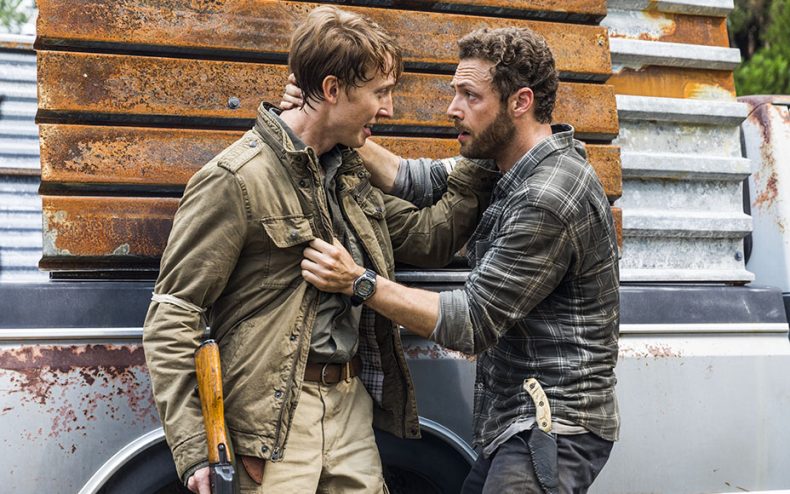 Seen the latest episode of The Walking Dead and shocked at the latest death? You’re not alone…how come the actor didn’t see it coming either?

Among Walking Dead fans who have read the comics, it’s common knowledge that Eric, Alexandrian resident and Aaron’s beloved, dies during the All-Out War storyline. But until recently Jordan Woods-Robinson, who plays Eric, wasn’t aware of it. That’s because he only read the comic up to the death of Glenn.

Jordan told THR, “That’s where I stopped. As a fan of the show for years, and as a fan of the comic once I got the part, I realized I was learning too much about what was going to happen in the storyline. For me as an actor, it was important to preserve some of the surprises that were coming and not speculate as to where the story’s going. I think it’s really important to go into each script as fresh as you possibly can.”

Jordan did eventually find out, and it was before he had to shoot his own death scene, but it was second-hand from fans. “I had heard it was coming, only because you go to enough conventions and meet enough people, and you eventually hear, ‘You know Eric dies, right?” And I’m like, “No, I don’t want to know about that!'”

Eric exits The Walking Dead in a different fashion on TV than he does in the comics, where he is simply shot in the head. On TV he survived long enough to have one final conversation with his boyfriend — a change showrunner Scott Gimple felt the character earned. “Gimple really insisted on giving him an important hero’s death because Eric had never been one to be a pacifist. In fact, I would say him and Aaron were probably the sole line of defense for Alexandria before Rick and the gang showed up. They were fighters.”

“Eric’s big problem with fighting the Saviors last season was that he thought the odds were stacked totally against us and there’s no way we could win. I think a lot of fans saw that as cowardice. I think the opposite is true. I think Eric’s always been a great fighter…I love that it was a heroic and meaningful death, as opposed to just getting shot in the head like in the comics.”