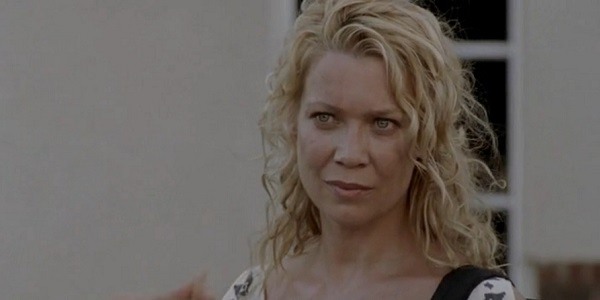 Ex-Walking Dead actress Laurie Holden was the special guest at the Walker Stalker Convention in New Jersey this week.

According to Holden, she was originally under the impression her time on The Walking Dead would last much longer (and that she’d wind up Rick’s girlfriend). Sudden deaths were a trademark of showrunner Glen Mazzara, who was fired mainly for this reason….he was not popular among the cast. Ever since then, killing major characters has become much more difficult, unless the kill is divided by an entire season, hence Negan taking an entire year to show up.

Well I had an 8 year deal, I was supposed to be there until the end. I was supposed to end up with Rick. I was supposed to save Woodbury on a horse, and I was buying a house in Atlanta. I got the call at 10 o’ clock the night before, while I was shooting, from the showrunner who is no longer a part of The Walking Dead, saying that they couldn’t write the episode and that he was killing my character. So we all got the script [and] everybody on the set was sobbing. I felt like I got shot. None of it was supposed to happen the way it did.

The truth is, very few long-running TV shows have a story that ends the way it was intended to. It’s natural for a storyline to evolve and change as its characters’ personalities become defined. By Season 3 Andrea was half-villain, switching sides constantly between the Governor and Team Rick. If she had wound up kissing Rick after that, it wouldn’t have made any sense.

The comic’s storyline uses Andrea’s original arc. On TV, Michonne is currently being used in place of Andrea during scenes where Rick gets some.