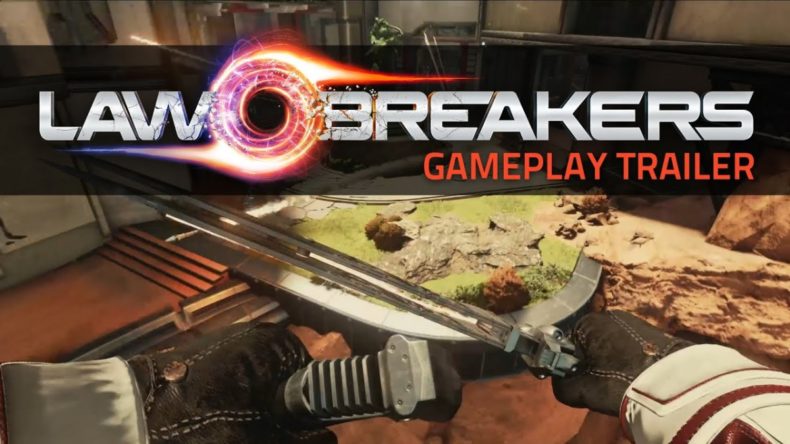 A gameplay trailer for Lawbreakers, Boss Key Productions’ new multiplayer shooter, has been unveiled at Pax Prime. This is the first time anyone has been able to see how the game will play.

Lawbreakers has not been discussed on this site yet, so here’s what you need to know: in the future this game is set in, the moon is broken in half, making Earth’s gravity all wonky. This results in…..nothing, civilization stays the way it is. ….What, does EVERY major event have to end in apocalyptic ruin? You’ve got awfully pessimistic expectations!
Actually, civilization is eventually threatened anyway, but from a different source: gangs of supercriminals called Lawbreakers, who use the diminished gravity and futuristic weaponry to loot, murder and spread crime. Lawbreakers is an arena shooter game where players are divided into five-on-five matches, the Cops against the Lawbreakers. From there, go nuts.
One unique element, besides the gravity bouncing, is that the playable cast is equally divided between male and female characters. Polygon transcribed the biography and background behind each of them:

“Kitsune is a fast, highly maneuverable melee fighter with deadly precision. She excels when she can get up close and personal, preferring to catch her opponents by surprise. Although she is not well-suited to tackling opponents head-on, what she lacks in durability she more than makes up for in damage output and mobility.”

“As a well-rounded soldier, Breacher performs well in nearly any situation. His run-and-gun gameplay is well suited for novice and experienced FPS players alike. His assault rifle and sidearm have powerful and unique abilities, but still manage to feel comfortable and easy to use. Breacher excels at quickly subduing opponents and effectively supporting teammates.”

“An extremely mobile and highly stylized combatant. Maverick is what you would get if you strapped armor made from an F-15 Fighter Jet onto a Spec Ops soldier. Maverick uses her jets to take to the sky and quickly move around the battlefield, raining down death with her Vulcan Gatling cannon and massively destructive Starfall ability, which allows her to take flight, then plummet, dealing massive damage to anyone caught in the blast.”

“An absolute brute. High durability and damage output, but very low mobility. Cronos charges the front lines, soaking damage for his allies and dishing out twice as much with his rocket launcher and ricochet grenades. Most opponents will want to stay as far away from Cronos as possible. If he gets too close to you, it’s probably too late — you’re already dead.”

Lawbreakers is planned for a 2016 release.

Cliff Bleszinski Reveals New Look For Lawbreakers At GDC
Be the first to comment!
Leave a reply »