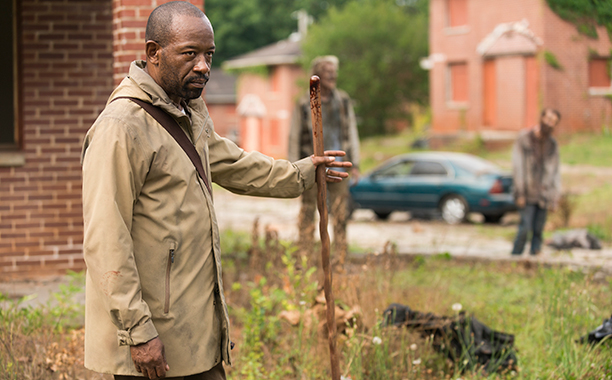 How would Morgan, the pacifist stick-walker who wanders through the Walking Dead world, deal with a bunch of people desperate to know his secrets? He would probably just clam up, ignore them and keep walking. It’s fitting that Lennie James, who plays Morgan on the show, employs the same strategy, as he confessed to EW.

“I’ve kind of done two things,” he says. “One, I’ve stopped speaking to people. And two, you have to get very single-minded about protecting this particular story line and trying your best to stay true to it everywhere. People will just whisper something in your ear when you’re at the store or when you’re at the supermarket thinking that you’ll turn around and divulge some piece of information, but so far I think I’m doing okay.”

You decide whether this means anything, but Melissa McBride is constantly asked if “Carol dies” yet the majority of people who approach James tell him “I know it couldn’t be you.” James adds, “That would have to be a really big bat for him to swing it from where he is and for it to hit me where I am.”

Staying silent, James feels, is the best way to avoid getting tricked by clever fans. “Everybody tries to kind of catch you out. Everybody asks who you’re filming with this particular day, or ‘Who did you see today?’ Or ‘Who did you have dinner with today?’ Or ‘Please send such and such my love’ — all trying to figure out what your reaction is going to be. And these are members of the public, these are friends of mine, these are members of my family all trying to ask the question that may well kind of catch you out.”