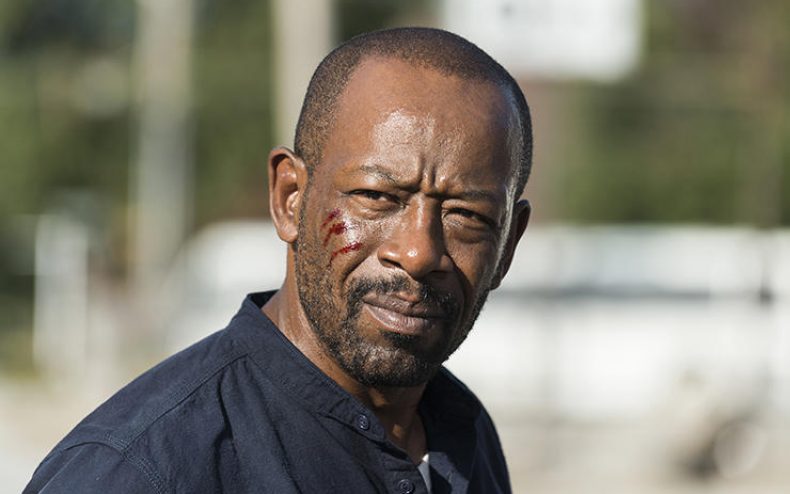 Morgan has been several different people at this point. When we first met him in the pilot he was somewhat of a normal, average dude. When he reappeared much later, he’d been driven mad by the savagery of the apocalypse and had turned into a killing machine. Later on he had transformed into a staff-wielding pacifist thanks to an eye-opening stay in a cabin with a new friend. As of last Sunday, however, his vow to never kill again has been thoroughly broken.

TV Guide published an interview with Lennie James, Morgan’s actor, the day after “Bury Me Here” aired. He was asked if Morgan has now thrown away everything he learned to believe in. James doesn’t think so.

“Obviously I’m going to argue no. That is not what it means…Yes, he’s taken a life in quite a brutal way, but I think he’s aware of the life he’s taken, and he’s aware of what it means to have taken that life and what he thinks could happen on the other side of it. So has he done something that he wished he didn’t have to and probably wishes he hadn’t done? Absolutely. But his philosophy, that we should meet people with an open hand instead of a fist, I think he still believes that.”

Is Morgan headed down the road to becoming the man he was in Season 3 again? “I’m not sure he knows, and for me, Lennie, playing Morgan, I think that’s the reason why he looks behind himself a couple of times in the episode, like at the end as he’s sharpening the stick. I think that’s exactly what he’s looking for. He’s checking to see how close the wilderness Morgan is to catching up to him.”

Lennie thinks Morgan might have come closer to becoming that man again if Carol hadn’t stopped him. “When he comes to Carol, he’s basically coming to her to say goodbye, because he’s getting back on that road. And until she talks him out of it, his war was going to start right there. He was going to walk down the road and he was going to keep walking and if he came across people, he would want to know whether they were Saviors or from some other group and if they were Saviors he was going to kill them.”

The next episode of The Walking Dead airs this Sunday at 9 on AMC.