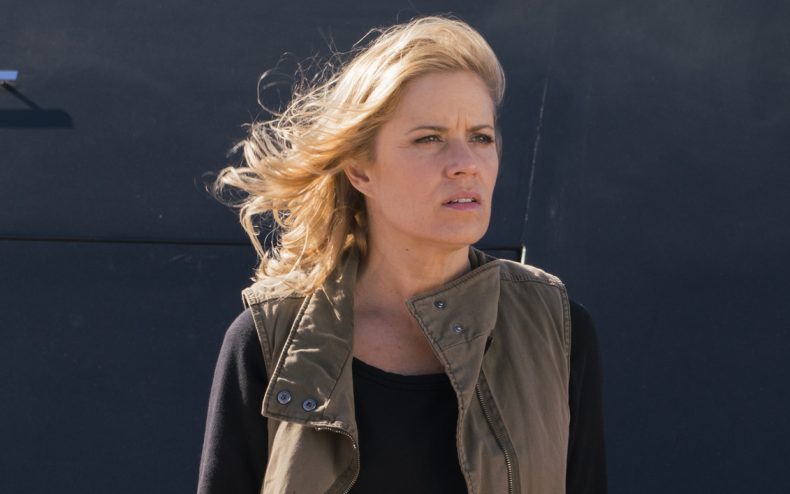 After the events of Season 3A, it would appear Madison Clark has seized the role of Main Character on Fear The Walking Dead. What’s more, her decisions of late have been awfully similar to the kind made by iconic protagonist Rick Grimes — both are tough as nails, spontaneously stabby, and determined to protect their surviving family members no matter what moral gray areas need to be crossed to do so. Wasn’t FTWD originally sold as the show where you follow a family, instead of one central point of view?

According to showrunner Dave Erickson, no. Madison was always intended to be the show’s main point of view, and Travis’s exit was pre-planned a while ago. He doesn’t say if those plans go back to the beginning, but he leaves no doubt who the Rick is here.

“I think there was a version of the story in which we didn’t lose Travis until later. I think one of the positives, and there’s certain pros and cons, regardless, but what it forced us to do is really have Madison arrive. . . Kim [Dickens] is number one on the call sheet, and she’s always been, in my mind, she’s always been our lead and our anchor.

From a story perspective, the loss of Travis forced her to double down on the ranch and on this family. On the Ottos, even though there’s a lot of ugliness and violence that goes with Troy and as the season progresses, also goes with Jeremiah. But it really forced her hand and made her embrace this place as a home. And she becomes hell-bent on ensuring that it stays that way. So there is that, but yeah, it opened up more story.”

Erickson goes on to say that with 42 minutes of storytelling time per episode, “you can only service so many characters on an ongoing basis,” and this is the reason for the dramatic cast trimming as of late. “Strictly in terms of story real estate, it meant that Madison had to step up as a character, but it also meant that she ended up taking on a lot more story.”