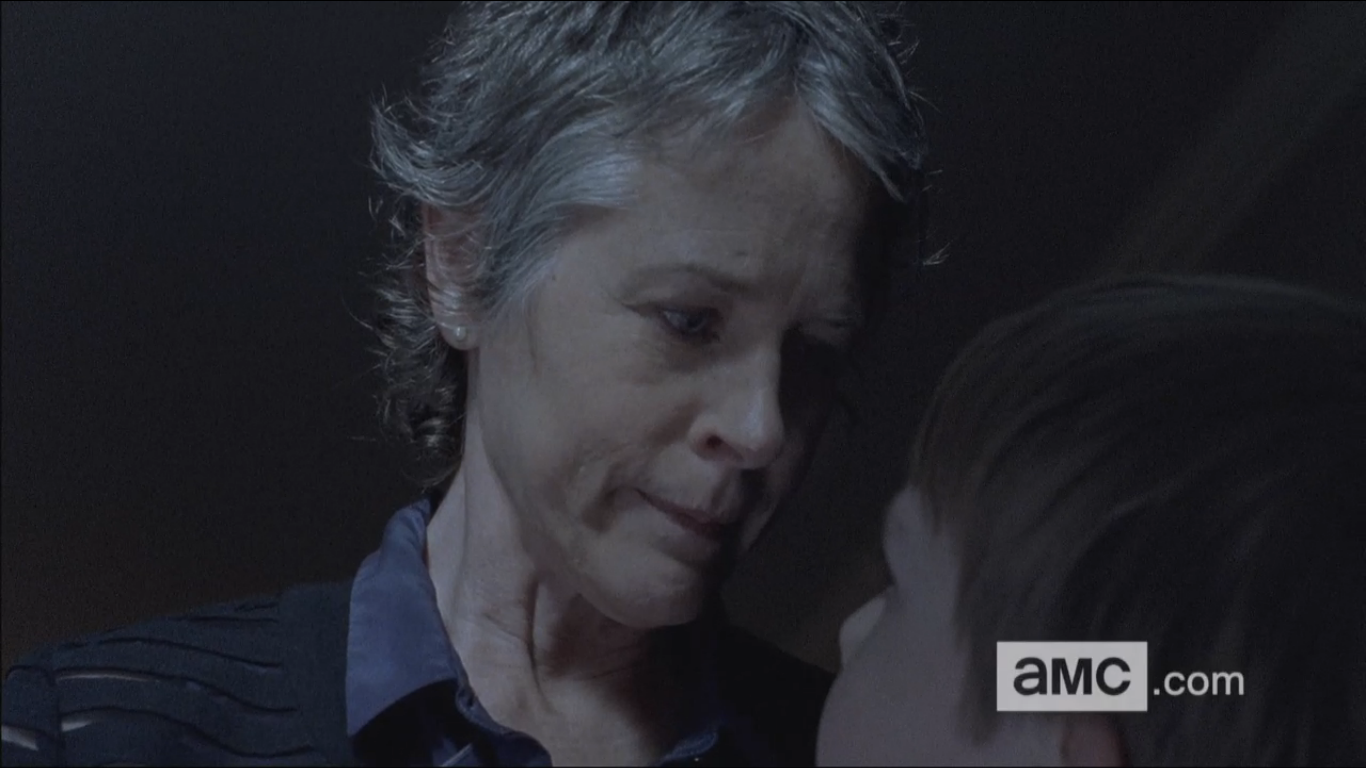 We’re serious about the spoilers. One last chance to turn back? Okay.

Forget walkers. The scariest thing in The Walking Dead history might just be Carol calmly, reasonably offering a child an easy choice between delicious cookies or being eaten alive in last night’s The Walking Dead episode “Forget.”

Caught stealing guns from Alexandria’s stores, Carol told Jessie’s young son, Sam, that she would buy his silence with all the delicious cookies he could eat.

Or, if he didn’t take that option, he could wake up soon and not be in his bed.

“You’ll be outside the walls. Far, far away, tied to a tree, and you’ll scream and scream because you’ll be so afraid. No one will come to help because no one will hear you. Well, something will hear you. The monsters will come. The ones out there. And you won’t be able to run away when they come for you. And they will tear you apart and eat you up, all while you’re still alive. All while you can still feel it. And then afterwards, no one will ever know what happened to you,” Carol tells Sam, in a tone similar to how a mother might explain to her kid why they shouldn’t talk to strangers or what will happen if they go in swimming right after eat.

Melissa McBride talked about Carol, and that scene, for one of Entertainment Weekly’s regular episode followup interviews.

“I loved the scene. I was like, this is going to be such a fun scene to do. And Major Dodson [who plays Sam] is such an awesome kid. I feel like we hit it off right away. We share a similar humor and he’s curious and precocious and funny. I was really looking forward to doing that scene. I thought, she’s telling us a story. Story time! [Laughs] In a way. But also, wow! What an interesting way for her to again protect the group at all costs because she’s trying very hard to keep her place so that she can go undercover and watch to see what’s going on and know who these people are. And that’s so important—the survival of her group, and also the people within the walls. And the children—him, too. She’s got work to do, and if you tell anyone what’s going on, this is what could happen. And, really, that’s what could happen, you know? This is not unlike her teaching the children how to protect themselves. This child is unaware of this threat that is out there. They’re sheltered. They don’t know what’s going on. But if my cover is blown, some bad things could happen,” McBride said.

As to whether Carol meant to imply that it was she herself who would tie Sam up in the woods, yeah, she did.

“And that’s okay with her. That’s okay. She’s cornering him and really driving that threat home,” McBride said.

McBride also talked to EW about Carol’s attempts to go undercover in Alexandria and not show her strength. This included a new wardrobe, featuring a blue sweater that Norman Reedus called “ridiculous” in a funny, ad-libbed line.

“Oh, wow. We had so much fun with that. I remember working it out with [costume designer] Eulyn Womble and we were going through the options, and so many we would just get such a kick out of and then be like, ‘No, that’s just too much.’ She worked hard to find a good balance of what we see. It was very different from what we’ve seen so it would make an impact. And Carol can play it, you know? But it was so fun getting to set the first day I shot in that first outfit—the one that Daryl said was ridiculous. I got out of the van and got into the center of the town and the van pulls away and I’m standing there in the road. [Laughs] Everyone’s standing around and it all kind of stopped and everybody turned and started laughing and going ‘WHAT?!? Oh my gosh! What’s going on? Is that really your wardrobe, Melissa?” McBride said.

AMC Creates Virtual Alexandria Safe Zone For You To Explore