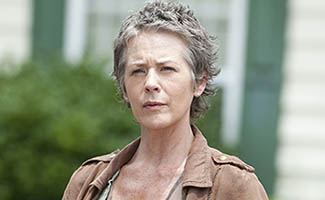 EW published a new interview with Melissa McBride, the woman who plays the conflicted Carol on The Walking Dead. The majority of their conversation was about the cliffhanger, which Carol wasn’t included in. This hasn’t stopped folks from pumping her for information.

They ask, but they don’t try to get me to spill the beans. They ask and it’s a lot of me saying, “If I could tell you, would you really want me to tell you?” And then they’re like, “No. I want to know, but I want to wait. I don’t want to know. I don’t know if I want to know. It’s driving me nuts!”

Like every other cast member, everybody McBride meets at the store or waiting in line at the bank asks her the same question: “who died?” The dumber ones add to this, “Was it you?” This list includes McBride’s own mother.

As for the people she’s met who are angry — and she’s met plenty — McBride promised the wait would be worth it. Given that her scenes take place apart from Negan’s compound, she might have not seen everything, but she’s liked what she has seen. Very much so.

The Walking Dead rocks the walls October 23 at 9 PM.