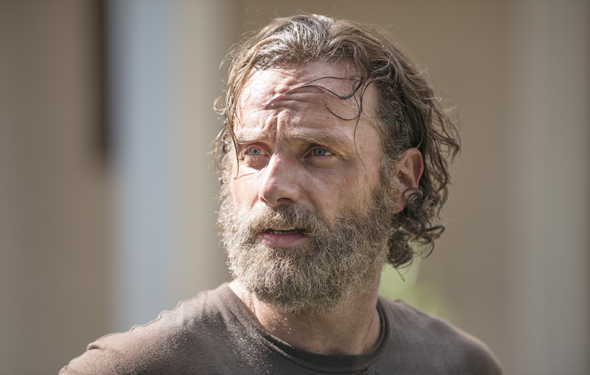 It’s possible that the title hints at a line of dialogue in the episode. The mind boggles thinking about who would speak it. Morgan is of course the most obvious person to need catching up, but that’s just a guess.

AMC has also released the official synopsis of the episode.

After all the recent trials the group has faced, a slight detour might prove to be the solution they’ve been looking for.

The slight detour could possibly refer to the encampment Noah mentioned in an earlier episode, although that’s far enough away from Atlanta that slight might be stretching it a bit. However, if the episode picks up with the gang on the road to D.C., it might make more sense.

E! Online also managed to bug Executive Producer Gale Anne Hurd for a scoop as she picked up the David O. Selznick Achievement Award in Motion Pictures for her past movie work at the Producers Guild of America Awards Saturday.

Hurd told E “There will be a lot of action, there will be a few tears, and we’ll be seeing an entirely new aspect of the world that we’ve seen thus far. That’s something that I think the comic book fans are especially looking forward to.”

“I’ve been on set every day,” she says. “It’s going great. It’s another way to examine how the zombie apocalypse affects families, and we’re coming at it from an entirely different direction and we’re examining families in Los Angeles. So it’s nice to be at home, destroying LA as we do.”