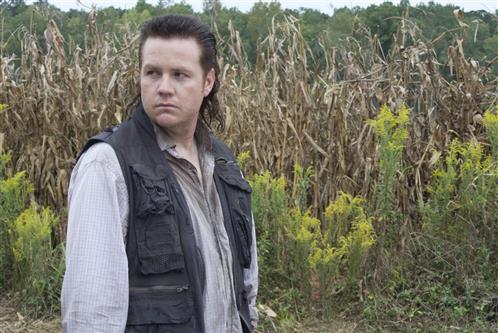 Before you click over to the full article, there is one major, no kidding comic spoiler in it. Who knows if it’ll be the same in the show, but forewarned.

So we’ve had a little time to get to know Eugene, man of mulleted mystery. We know he says he knows the cause of the walkers. We know he apparently can’t shoot worth a damn. But what do we really know?

Yahoo TV talked to Josh McDermitt about his character’s motivations, starting with the question on everyone’s minds. Where’d he get that beautiful Tennessee tophat?

Half of it’s my real hair. Thankfully, I don’t have a real mullet. I had longer hair … in fact, it’s naturally blond. They fashioned it into a flattop, and they left whatever length I had in the back. Then they clipped in some extensions and dyed it all brown. But when they’d take those extensions out, I’d still look ridiculous. They were taking us back to the hotel, after we were shooting one day, and I was so sad and embarrassed, and I said, “Can you please, just take me to the store so I can buy a hat?” They looked at me funny, and went, “Yeah, OK, whatever,” so they take me to Walmart. I walked in, and there were like five people with the same haircut. Instantly, I’m like, “You know what? I’m OK.”

OK, so they actually asked the real question on everyone’s minds, but McDermitt played coy on whether Eugene is legit. He did admit that maybe he’s not as bad a shot as he seems.

The thing to keep in mind with Eugene is, he’s kind of playing a chess match in his head. He’s always scheming and trying to manipulate the situation for his own gain, and not necessarily manipulation that’s bad. He’s not a bad guy, but yeah, I think he shoots that truck on purpose.

Makes sense, I’ve never met anyone with such a majestic Kentucky waterfall that didn’t know how to shoot.

Much more in the full article, if you don’t mind comic and potential show spoilers.

‘Self Help’ Poll: Should the Group Forgive Eugene?

Will Eugene Lead the Way to the Cure in Episode 505 ‘Self Help?’ (Previews and Poll)

Eugene Has A Mullet – Still Smarter Than You
Be the first to comment!
Leave a reply »