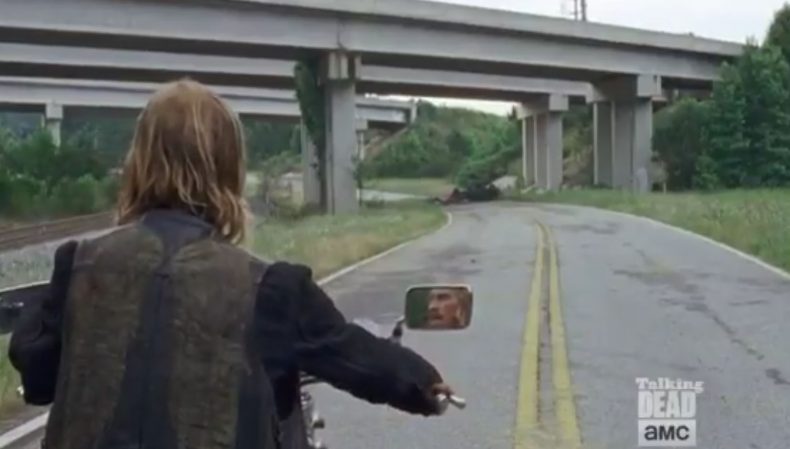 October 23 is still far, far away, and no one expected AMC to be releasing any bit of it THIS early, but here you go. As part of a Walking Dead hour-long special that aired last night, a newly-revealed 15 second clip from the mystery season made its debut. AMC stuck it on its Twitter account for easy viewing:

New scene from season 7!
Retweet if you're excited! #TWD pic.twitter.com/Ic35s4mcC0

At first you might think we’re getting absolute confirmation Daryl lives, but then you notice the hair doesn’t look quite right. Then we get a view from the front. It’s DWIGHT! Give Daryl back his bike, you jerkhole!

Oh, wait…it’s not Daryl’s bike. If Dwight found his own bike, that’s a good thing, since he doesn’t have to take Daryl’s anymore. BUT…..the jacket he’s wearing looks a lot like Daryl’s. Some might interpret this as a sign Daryl is getting The Bat, but I say AMC wouldn’t give such a thing away this blatantly. That, and people have seen Daryl filming new scenes for Season 7.

Ah yes, and one of the zombies can do this cool rotating move with her hands. This would make her a hit at parties if zombies could think.

The other 59 minutes and 45 seconds of The Walking Dead’s season premiere will show up October 23 at 9 PM.