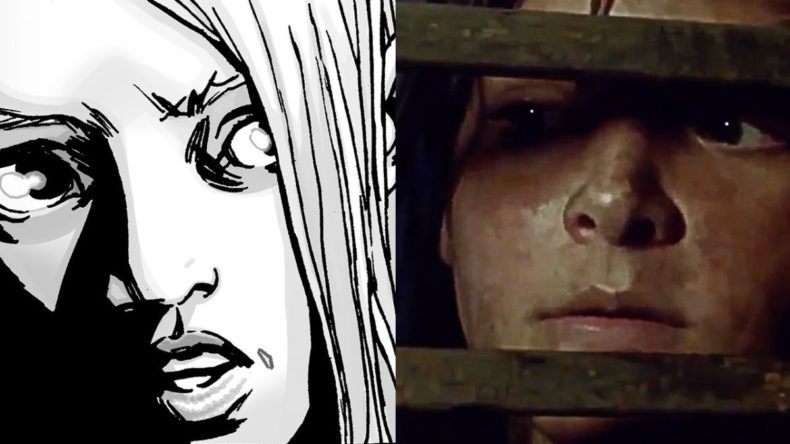 Who has AMC revealed in their latest midseason promo? Fans of the Walking Dead television programme. meet Lydia. And her mother’s gun.

Lydia is a young member of the Whisperers, the latest gang of baddies to cause conflict with our heroes. In the comics, she is the only member of the Whisperers to reveal her true name. Also in the comics she develops a relationship with Carl, because he takes one look at that wrinkly hideous mask and thinks “Hubba hubba, where’ve you BEEN all my life?” But there’s no Carl now. What do you plan to do about this, Kang?

“We always try to remain true to what are the most important and exciting moments in the comics even if we remix it in our own way,” Angela Kang said to ComicBook.com. “I think we found as writers, but also the audience tends to respond well too, we’ve seen, stories that are so many degrees off, or that take us in another direction before we come back. The Terminus story of season four, which we all had a great time writing, that’s the Cannibals in the comics and we get to it a completely different way. We’re always looking for those opportunities to dig in deeper with the characters by maybe taking a little bit of a side road to get back to the main highway.”

This is a bit of a spoiler, but it’s easy enough to discern from the trailer itself: Lydia is how the Hilltop winds up meeting the Whisperers as a whole. She is captured and thrown in jail, which leads to an army of Whisperers led by Lydia’s mother “Alpha” to attempt getting her back.

Watch these events unfold, plus possibly more, when The Walking Dead returns to AMC February 10.