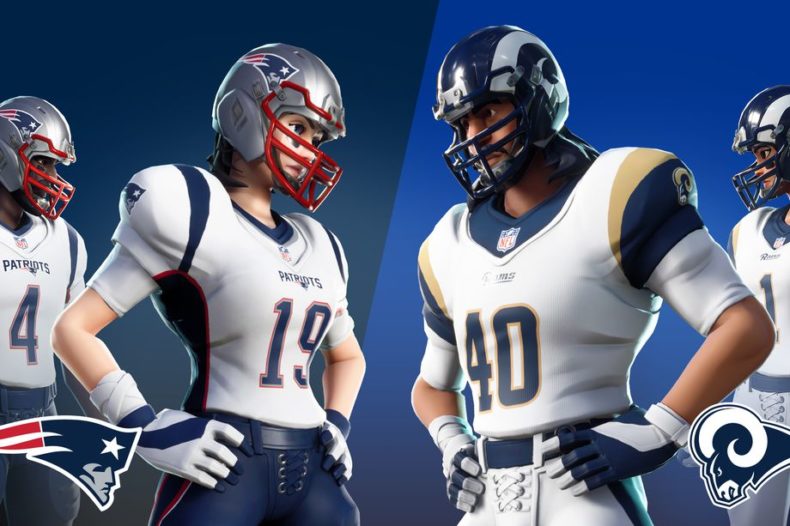 Last year Epic Games celebrated the Super Bowl with special NFL team uniform skins. Do they plan to do the same this year? You called it….the skins are back. When are they available?

Starting February 1 at 7 PM, Fortnite players can once again purchase the outfit of their favorite team and wear it around. The two teams that will be in the Big Game this Sunday (Rams and Patriots) will get brand-new white variants for their uniforms. Like the previous offering, though, these skins will only be available for a limited time. Epic hasn’t said how long, but it will at least be through Super Bowl Sunday.

In more immediate news, Epic has applied Patch 7.30 to Fortnite. This patch continues the “snowman” theme by adding Chiller Grenades, smiling snowballs that will knock opponents back and cause them to slide as if on ice. You may want to wait a bit before applying this patch, though — some users are reporting issues with it. Epic plans to introduce some fixes over the next few hours. In the meantime, the full patch notes are below.

This resolves an issue where vehicles could be damaged when using Balloons while on a vehicle.

These were turned off in 7.20 due to an input bug they were causing.

This will remove the ability to loot the Spiky Stadium as well as Impulse Grenades.

This was done due to an issue that was sending players back to the Lobby.

Within this mode, player built structures can now be edited by any player, regardless of team status.

This is an experiment that we’d like to try out in this testing environment, but aren’t quite sure of the full impact. We’d love to hear feedback from your experiences playing with this change.

All players who previously purchased the Fourth Down set will be granted these variants.

The Streamer Mode setting has been replaced with two separate settings:

This will display your name as “Anonymous” to all players that are not in your squad.

Your account info will still be attached to reports submitted by other players using the Player Reporting feature.

This will display all other player names as “Player” unless they are in your squad.