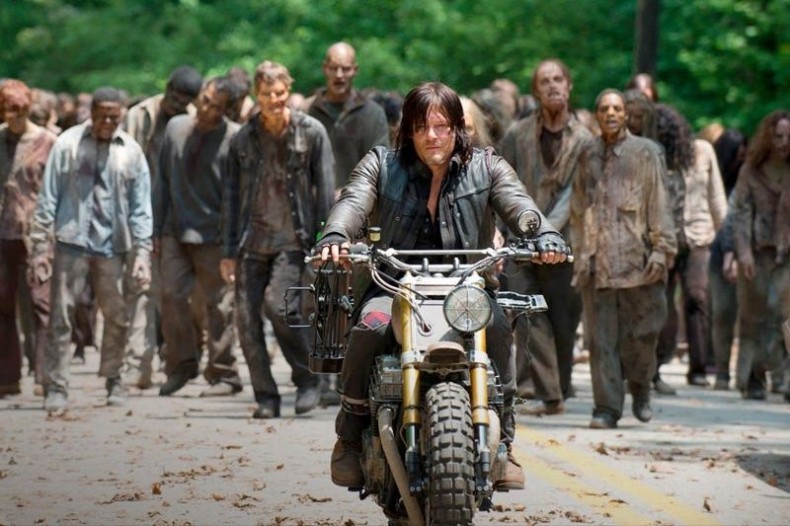 Yahoo TV sat down for a discussion with Norman Reedus about his character Daryl and last Sunday’s TWD episode, which revolved around him for the first time in a while. Here are the most revealing segments from that interview….

Daryl has a nice side, but not super nice, and that balance is part of the reason he took the figure “Daryl sees the insulin in the bag, and he knows they need that. It kind of explains why and how they’re operating right now. It was like, “Here, I brought this back, but give me something. I came all this way. I’m not going to do this for nothing.” It showed that I’m a nice guy, but not a super nice guy. You know what I mean? He doesn’t care if his grandfather taught him how to whittle. “Just give me something. I’m scavenging you right now.” If he’s taken the time to whittle this, it’s personal. It’s like, “I’m just going to take that little bit that’s personal away from you, right now.” It might hurt him a little bit.”

Things that seem inconsequential at the present time may pay off in big ways later “Scott [Gimple] has things mapped out so far in advance, and there’s no wasted screentime on this show. If you see something, it’s going to play later. I mean, down to like the little carved statue I demanded [the guy in the forest] give me, just to be a jerk. Every single thing that happens, from here on in, is just like we just jumped off a cliff.”

For example, an episode focused on Daryl and Rick that will air in the season’s second half will partially play off Daryl’s feelings from the events in this episode “That episode’s completely different. Things happen in that episode that are huge. I remember before we shot that, Andy [Lincoln] came over, and we watched Butch Cassidy and the Sundance Kid. He’s so Butch Cassidy, and I’m so Sundance Kid. Everything about the two of us, on-set and off, is like that. I texted Robert Redford afterwards and said, “Hey. What’s up?” It’s really a super cool episode.”

As for the voice on the truck CB, we can eliminate one person “Not Glenn. The only thing I’ll say is that it’s not Glenn.”