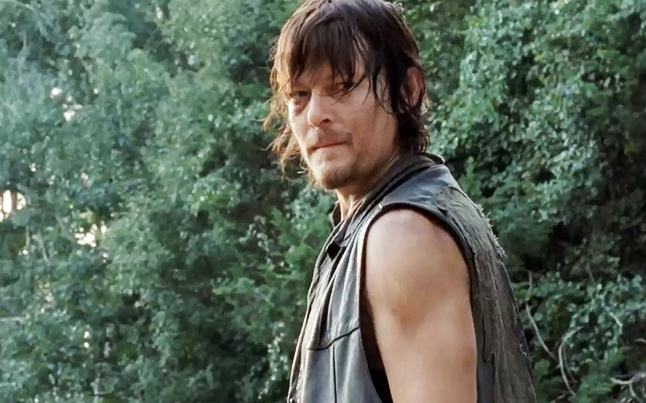 Can’t get enough Norman Reedus? You’re not the only one.

Reedus told Men’s Journal that he signs a lot of butts nowadays:

“I’ve seen Daryl tattooed on maybe a thousand people. I’ve been asked to put my breath in a bottle and seal it up. I’ve had babies named after me. There was one lady who asked me for an autograph, and she pulled a chicken out of her shirt – she wanted me to hold her chicken.” (He did.)

Before Daryl, Reedus got used to a rough, idiosyncratic life, where he followed his passions  wherever in the world they took him and pursued a career making “grotesque but really beautiful” art (like carving a giant vagina and clitoris out of rock).

Even the way he got into acting had a wild side. Reedus got fired for fighting with the owner of the L.A. motorcycle shop where he worked, and his drunken antics the night after at a party got the attention of some Hollywood types and sent Reedus on the path to acting and, eventually, signing butts as Daryl Dixon.

“I had a friend’s big, broken glasses on, and I was going off. It was a production,” he says. “It was a thing.” When asked if he might want to be in a play, his first question was “Does it pay?”

Reedus is most revealing, though, when the topic is his childhood and his family, including his 14-year-old son, Mingus.

“I woke up at 6:45, made breakfast – eggs, cereal, fruit, just a smorgasbord – woke up my son, organized his stuff, drove him to school, came back, tried to organize my house, FreshDirect came, I started to answer emails, and made a bunch of those,” he says wryly, nodding toward his coffee.

Reedus seems proud of his son, who seems to be carving his own creative, independent path. Reedus says Mingus is a “cool kid” that started a band called “God Fart” and skateboarded through New York in a dress.

“He’s funny, though. I was just going through his closet, and I was like, ‘What can I get rid of? We’re downsizing. What do you not wear anymore?’ ” Reedus laughs. “He made a giant pile of Daryl Dixon T-shirts.”