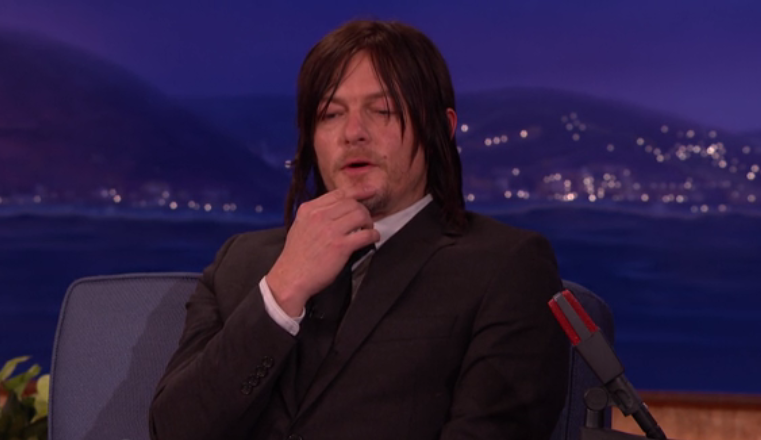 Norman Reedus says he would have no problem playing his The Walking Dead character Daryl as gay.

Reedus tells Conan O’Brien that question was raised when someone asked The Walking Dead creator Robert Kirkman if Daryl would take over the role of Jesus, a “real badass” from the comics who is also gay. Kirkman admitted that was discussed.

Reedus also said he had a talk with Frank Darabont, the show’s original show-runner, early early on, about playing Daryl as gay.

“And I’m like, Hell yeah, let’s do it,” Reedus says he told Darabont.

Kirkman eventually cooled the debate by saying Daryl was officially straight, but that The Walking Dead was adding a new gay character who turned out to be Aaron. Reedus said that when the rumor was going around kids seemed to be cool with it, guys his age seemed freaked out and Reedus fangirls would tell him “You’d better not be.”

But Reedus said if plans do change and lead to Daryl being gay, he’ll happily play Daryl that way and give it his all.

“If that’s the story they gave me, I would rock that story,” Reedus said.

Reedus also talked to Conan about his tendency to lick people, and how fans sometimes ask to be licked. And he revealed that he did not actually eat a worm in the infamous worm-eating scene in “Them,” even though he wanted to. Reedus said animal rights people were standing by to make sure Reedus spit it out unharmed.