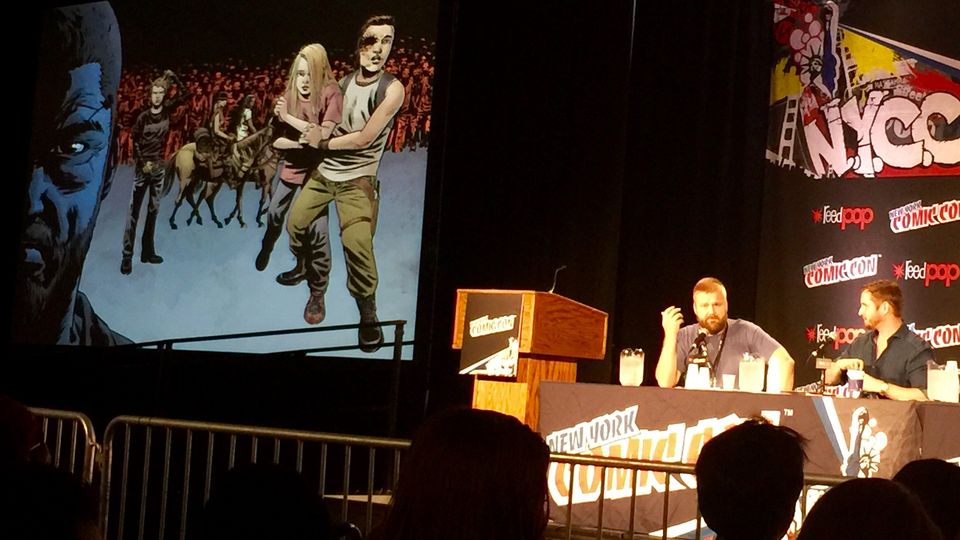 The Walking Dead creator Robert Kirkman was the special guest of a panel centered around the comic/show/franchise yesterday at New York Comic Con, hosted by The Nerdist’s Dan Casey. Kirkman said most of the early episodes this season, which begins next Sunday, are going to end in some nail-biting cliffhangers. “This is going to be the most intense season of The Walking Dead yet. The first couple of episodes hit the ground running and there are big cliffhangers at the end of every episode. I’m watching cuts and I go, ‘I gotta watch the next one!’ I just hope that’s how everyone else feels.”

On the subject of makeup, Rob revealed an increase in the use of computers and digital effects to make the zombies more gruesome. “There are a lot of cool zombies this year,” said Kirkman. “A lot of green noses on set that are going to be taken out digitally. To continue to decay them up.”

Kirkman was asked if there was anyone in the comic or TV show he regretted killing off. “I regret all of them and none of them at the same time,” he said. “It’s harder on the show because those are actors and they are good people, but if I didn’t feel regret I don’t think I would have done my job. The point is that you’re supposed to feel that loss.”

Daryl Dixon is a fan favorite on the show, but in the comic he doesn’t even exist. When asked about this, Kirkman revealed Daryl was an invention inspired by casting. “He was auditioning for the role of Merle Dixon (Daryl’s brother),” he said. “We liked him so much we created a character for him. I would have to credit Norman Reedus a great deal for how that character developed on the show, a great deal.”

Kirkman also sort-of let slip the confirmation of a season seven, depending on how you look at this statement:

“We’re talking about season seven,” he said. “It’s not official but given the success of the shows, I think there’s some room for that sort of thing, there’s a good chance it will happen.”

Given the record ratings numbers The Walking Dead continues to pull in for AMC, and the fact that more than one spinoff is out there, I think Season Seven was a foregone conclusion before Kirkman even spoke. Spoilers: there will be a season eight.