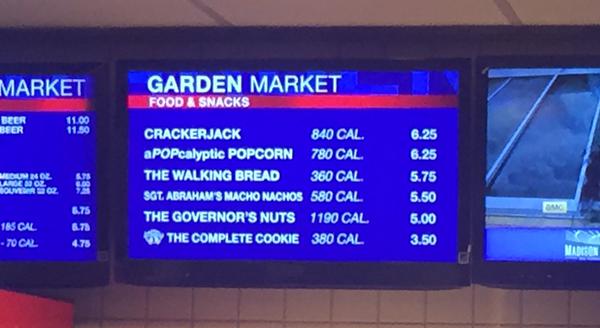 Variety has officially spilled all the beans — every last bean — regarding the NYCC Walking Dead Season Six panel, the centerpiece of which was a screening of the entire first episode (which the rest of us will see in 24 hours). Outside the auditorium were various show-related decorations including Daryl Dixon’s motorcycle and an animatronic recreation of the Governor’s floating head aquarium. Oh, and show-appropriate snacks were for sale (see above).

Prior to the screening, the event was opened by executive producers Gale Anne Hurd and Greg Nicotero, who both reflected on just how the series has blown up since it was a scrappy little idea based on a comic book that AMC was willing to take a chance on. Nicotero added, “I’m a fan, too. I grew up (with) George Romero’s ‘Dawn of the Dead,’ ‘Night of the Living Dead’ — those are my favorite movies and I grew up a half an hour from where they filmed those. So I felt a connection. So the fact that I get to share that connection with millions of other fans who love zombie stuff and love the characters and love the effects that we come up with. I mean I just feel like I have a million new friends that I can talk zombies about. It’s pretty great.”

Michael Cudlitz showed up in a Scottish kilt and said he thought Abraham won’t have an easy time adjusting to Alexandria. “He doesn’t take well to downtime. He doesn’t take well to reflection. And all these things are what happen when you have downtime, when you don’t always have to be fighting a mission or worrying about your next meal or how you’re going to to live until tomorrow. There are tomorrows now. What does that do to him? What does that do to everyone?”

What about Rick — has he finally gone too far round the bend? Andrew Lincoln doesn’t think so. “He’s a complicated cat. He’s been through quite a lot. He’s not unhinged. He’s an uncompromising, realistic brutal leader. He’s lived outside those walls for two years and kept people alive and I think where you find him (this season) is very much a spillover from last season where he’s not willing to tolerate incompetence. If people can’t keep up with him then you will get left behind. He’s trying to school the Alexandrians. It’s a tough school but it’s a tough world.” 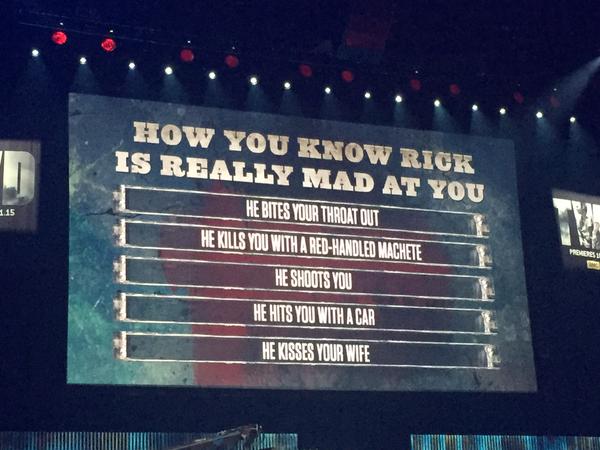 It was at this point that the audience found out why Daryl’s motorcycle was in the lobby — Norman Reedus came right down the center aisle riding it, its engine roaring.

After a brief Q&A session, the cast was broken up into two teams and instructed to play a Family Feud-style game regarding the series and their characters’ personalities (such as the question above). Towards the end, fans were treated to surprise appearances from cast members who had been killed off in past seasons, such as Chad Coleman, Michael Rooker, Scott Wilson and Jon Bernthal. Wilson became the first inductee into the “Walking Dead Hall of Fame” and was handed an award.

Back on the red carpet, Nicotero reflected on how AMC will rarely be without shambling corpses now that two shows are running. “I think that’s the plan. I think if you turn on your television and there’s not a zombie show playing on AMC then somebody did something wrong.” He added, “The thing that I was most happy about with the spinoff is that it’s very, very different than our show. People wouldn’t get fatigued from watching ‘Fear the Walking Dead’ and then go back our show again. And I think we set that up even a couple of years ago when we did some webisodes. We sort of showed that there’s a world out there of stories that we can tell.”

The panel also provided one last bit of news: The Walking Dead’s midseason premiere will begin on February 14, 2016.