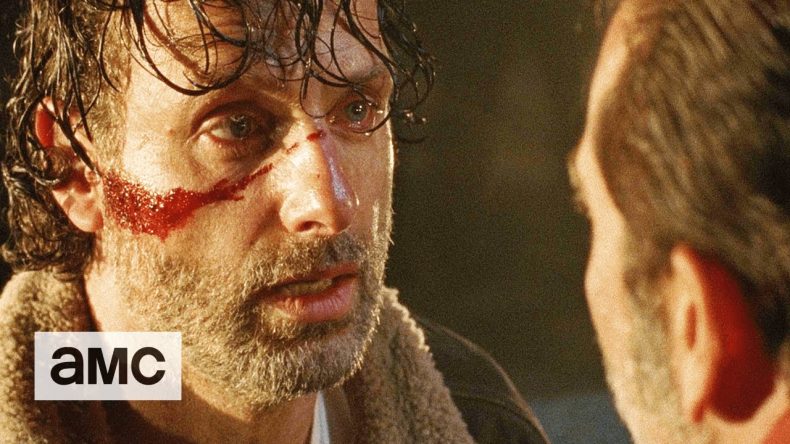 Halt the presses! AMC has done the unthinkable and released a clip from the upcoming Walking Dead Season 7 premiere, and it has nothing to do with Carol, Morgan or the Kingdom! They are giving us a preview straight from the Negan incident! They’s krazy!

Not only that, it clearly identifies at least one member of Team Rick as safe………Rick. Okay, that part’s not as earth-shattering. He really tempts his fate here, though. After Negan bludgeons (insert person here) to death, Rick mutters that he’s going to kill Negan….in perfect earshot of Negan. “What? I didn’t quite catch that; you’re gonna have to speak up.”

“Not today. Not tomorrow. But I’m gonna kill you,” Rick confirms to Negan’s face. This man’s got some guts still. Perhaps not as many guts as the so-and-so Negan just offed (and you better believe Negan takes this opportunity to mock that fact). Toward the end, we do get a brief shot of the mess, but just enough to not be identifiable. (You can try, but it won’t be easy.)

Enjoy these three tense minutes, but be warned they’ll make the wait for October 23 even harder. The Walking Dead returns that Sunday at 9 on AMC.