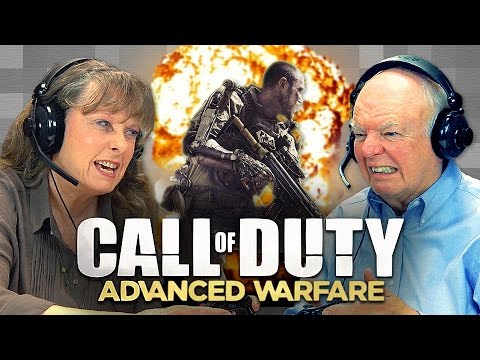 The Fine Brothers have made a career out of showing people things and seeing what they say. This time the thing is Call of Duty: Advanced Warfare Team Deathmatch and the people are old people. The results are pretty damn funny.
Most of the elders never get the hang of not looking at the floor and a lot of them focus almost all their efforts on attempted team killing, but some of them actually get their bloodlust going and get into it. You really feel for them when they get their first kills.
“I’m a nice person. I just want to (expletive) kill ’em,” says one of the older ladies, before getting off a solid shot.
“I killed someone!” she says with glee.
They also have some heartening reactions with the younger people playing online, who mostly offer advice and support instead of insults and slurs. One of the ladies does get into a verbal sparring match with a player who calls her an idiot, although eventually he does soften the insult to “Democrat.” Ahh, online play.
Although some of the seniors decide the game is too tough and violent, others enjoy the experience, and one even suggests she’ll buy herself a game console for Christmas.
“It’s all love and peace and joy and I’ll be sitting there going ‘Kill em! Kill em!” she says.