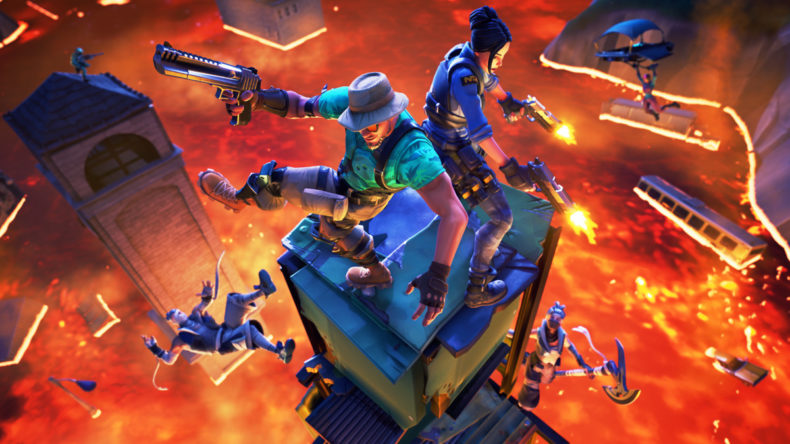 Who here used to pretend the floor is lava? When the newly announced Patch x8.20 appears in Fortnite, you’ll be able to relive those childhood fantasies onscreen. “Floor Is Lava” is a new mode about to erupt into the game.

A few minutes into each Floor is Lava match, molten rock will begin to flow from the map’s lowest points As the match progresses the lava will continue to rise until, finally, the only safe place to stand will be user-constructed structures. The lava is slightly less deadly than the real-world variety…making contact with it will not instantly kill you, but instead cause the Super Mario 64 effect of bouncing you high in the air. Too many touches, though, and you really will be out.

Floor Is Lava is described as a limited time event, so you’d best enjoy it while you can. There are other interesting things coming with this patch, like a poison Dart Trap and the long-awaited Arena Mode. Check out Epic’s patch notes below for the full details.

The Baller no longer applies damage to players on collision.

50 Health (or Shield) based on your health when the Elimination occurs.

That said, these mechanics have proven to be positive in our competitive playlists. All changes above remain enabled in the new Arena Game Mode.

8 total ticks over 7 seconds for a total damage of 80.

Subsequent hits will refresh the duration of the effect, but the amount of damage per tick does not change.

Can be found in the tropical biome.

When consumed, Coconuts grant 5 points of effective health over a short time. That means it will replenish shields if the player is at max health.

Can be found in tropical and desert biomes.

When consumed, peppers instantly grant 5 health and also increase the player’s movement speed by 20% for 10 seconds.

Can be found in the desert biome.

The Buried Treasure directional indicator is now attached to the player and emanates from the area of the treasure map in order to improve visibility, especially while moving.

Adjusted the equip time of the Epic / Legendary Pump Shotgun to match the Uncommon / Rare versions.

Entering a vehicle no longer plays the release sound of balloons if you have no balloons.

The balloon rope will no longer remain on your back when you run out of balloons.

Fixed an issue where players were flying out of a Pirate Cannon in a different direction than expected.

Fixed an issue preventing the ability to enter a Pirate Cannon when close to other geometry.

Fixed the ability for players to finely tune Pirate Cannon’s ability to aim side to side.

Lava gradually rises from the lowest parts of the map, and it’s hot! Drop in and quickly loot and gather materials so you can be the first to reach the high ground.

March 30th – Round One: All Eligible Players

What used to be the 0.5 setting is now mapped to 1 (maximum loudness)

If your volume was previously above 0.5 you will need to adjust the volume on your television or whichever device you’re playing on to achieve the same level of loudness.

This is the part of the UI that tracks how many resources and ammo you’re picking up.